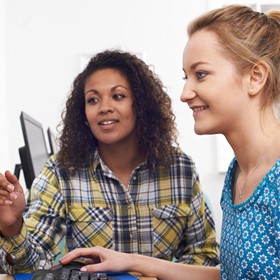 In the same month the new ISTE Standards for Educators were launched, the governor of Texas signed a bill requiring that preservice teachers be evaluated on their ability to teach in a digital environment, with the Educator Standards serving as the benchmark.

The June passage of Senate Bill 1839 made Texas the first state to include the Educator Standards in legislation.

SB 1839 also empowers the Texas State Board for Educator Certification (SBEC) to create rules governing the creation of continuing professional education courses for in-service educators to learn more about digital learning, and provides guidance on what digital learning means and how it can empower teachers to bring a more robust, complete and up-to-date educational experience to classrooms.

The creation of the legislation and the inclusion of the Educator Standards are based in the efforts of ISTE affiliate Texas Computer Education Association (TCEA) and Director of Governmental Relations Jennifer Bergland.

TCEA was focused on referencing the standards in the legislation because “we feel like the ISTE Standards are the gold standard for educator proficiencies,” Bergland said.

While the bill states that preservice educators must be assessed for digital learning skills and that instruction to meet those skills must be provided, how that will be implemented will be fleshed out in the coming year.

“The law is effective immediately, but it takes time to roll a bill out and get the rules made,” Bergland said. “Digital learning skills guided by the Educator Standards will be part of the preservice experience, so it’s truly taught at the college level.”

The bill will help address the common misunderstanding that today’s college students, as digital natives, instinctively know how to use technology as educators. “When I would speak to a college-level class, what they thought was in the classroom was 10 or 15 years behind. There’s a lot of technology being used in classrooms and its important they understand how to use the technology for learning and teaching. They don’t have the pedagogy and sometimes there’s a disconnect,” Bergland said.

The bill also applies to alternative certification programs.
In the same legislative session, TCEA backed a bill, also signed by the governor in June, that provides a state repository for school districts to share open educational resources (OERs) and provides for a web portal that will feature information about fee-based and free materials so districts can compare products based on price, technical requirements, Texas Essential Knowledge and Skills (TEKS) alignment and editorial review.

After the recent successes, Bergland plans to begin work on an omnibus bill that would require computer science education for all K-12 students in Texas. A lofty goal, indeed, but one that is gaining momentum around the country and the world.

Bergland, a former tech director, is neither a lawyer nor a lobbyist. She’s a passionate edtech advocate. “I was passionate about the political process, and I taught American history and government.”She gained advocacy expertise attending education policy events in Washington, D.C., and via ISTE advocacy training.

Her passion for policy led her to serve in an ad hoc advocacy position on the TCEA board starting in 2009. In 2011, she became the director of governmental relations.

“A lot of things good things were happening in edtech in the first 10 years of my career. Texas was leading the nation in the field, we had a telecommunications discount for school districts before there was E-Rate, and there was state funding and No Child Left Behind Act (NCLB) funding. That changed in the 2000s and the money began to dry up,” Bergland explains.

Bergland has these tips for educators who have a passion for edtech advocacy, but don’t quite know where to start:

Get connected. Start by establishing contacts with your local representatives and state senators since most education policy is created at the state level. Visit your elected officials’ offices and get to know them and their staffs. Be bipartisan in your discussions, always seeking to find something you can agree on – and then build from there.

Maintain good relationships. You’ve connected. You’re a known commodity. Now you’re part of a previously insider’s game. While lobbying can look like hardball, Bergland says there is a kind of family feel at state capitols, and that’s a good thing. Nurture the relationships you’ve made, “even if it’s by bringing homemade cookies.”

Own your expertise. Educators are the experts on education. Don’t be intimidated by elected officials or twisty government procedures. Own what you know; you can learn the rest.