Engaging girls in games and coding 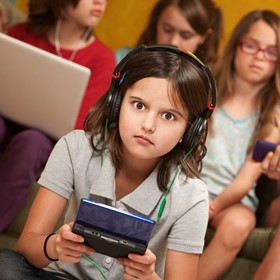 Tanya Martin is a mother, an educator and a World of Warcraft aficionado. As a gamer, she is exposed to a lot of stereotypes about women and gaming as well as notions that girls aren't as good at computer skills and coding as boys.

In fact, encouraging girls to get involved in gaming just might ensure that more girls become interested in STEM fields, especially technology and coding. Right now that's not happening. Boys make up 80 percent of  the computer classes at her school, and very few girls enroll in AP Computer Science.

Girls are gamers too

Martin, who is coordinator of the Professional Development Support Division at Broward Schools in Florida, is part of a team presenting the ISTE Professional Learning Series webinar " "Girls, Games, and Coding" " on Thursday. The reason to combine games and coding is simple: There is a clear relationship between gaming and coding. Video games can't exist without someone writing code. If girls make up 40 percent of today's gaming population, why aren't they being encouraged to create those games as well?

Unfortunately, Martin pointed out, the gaming industry follows the same boy-girl stereotypes that so many other industries and manufacturers do. Instead of using pink and purple to entice girls, video games are " "dumbed down" " or made more feminine to attract girls. That follows the same thinking as " "math is hard" " for girls, and Martin wants that belief to change.

Instead, educators can focus on the positive aspects of gaming . " "Games can help you to think and solve problems," " Martin said. A game like Minecraft, for example, is complex but it encourages the gamer to concentrate on the problem at hand and find a solution.

From a girl's point of view

The webinar will include seven enthusiastic female gamers, coders and app builders from around the country, ranging in age from elementary to high school. Martin hopes these girls will offer a refreshing perspective and that webinar participants will:

Martin hopes the webinar will encourage teachers to play some of the games most popular with their students.

" "You don't have to become proficient," " she said, " "but trying the game and understanding the basics of it will give you a new way to relate better to your students." "

Get fully engaged in gaming during  today's webinar with Martin, her colleagues and seven amazing students.