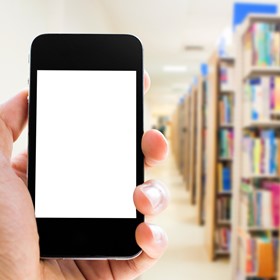 The biggest challenge I faced during the waning days of the 2013-14 school year was responding to comments, questions and dismay from teachers after they learned the 1:1 technology would not be available during the final three weeks of school. All I can say is three years ago, I would never have imagined we would be in this position.

I am the academic technology coach at Charles Carroll Middle School (CCMS) in Prince George's County, Maryland. In the summer of 2011, I was a part of a small program that paired three or four teachers with about 20 incoming sixth graders to see how we could enhance instruction using technology and project-based learning. In the fall, the program grew to about 60 teachers and over a thousand kids. But still, there were no more than a handful of teachers with any interest in using technology, and there was no structure in place. The school looked completely different, but the real change didn't come until the following year.

Around the end of the school year, CCMS was selected as one 12 Verizon Innovative Learning Schools (VILS) in the nation, and in the summer of 2012, representatives from VILS met with the original group of teachers in what was the start of a three-year tech integration journey that changed the way our teachers teach and students learn.

Throughout our first year as a VILS cohort member, our staff formed valuable relationships with counterparts at other schools around the country, members of Verizon Thinkfinity and ISTE. These connections brought us the structure we needed to be efficient and move forward. It also brought the members of the CCMS VILS team closer together, which was crucial to changing the culture of the school.

For those of us at the forefront of the movement, there was nowhere to go locally to learn and improve. We were the trendsetters everyone else sought out for leadership and assistance. But we were new to this ourselves, and our VILS affiliation provided us with much-needed expertise and advice.

One of the best things I learned during that first year with VILS was that it's better to perfect two things than to implement 10. My school had received a great deal of recognition because we were often the first to try new things, but it was more important to us to be the best at everything we did. We wanted to use our technology to inspire and engage students . We wanted to make a true impact on our students, which doesn't always come from being the first. We learned from VILS how to make ourselves aware of as much as possible, but to analyze our implementations, develop routines and procedures with integrated technology, and find efficiency over novelty.

In the summer of 2013, three teachers and three administrators from CCMS traveled to San Antonio, Texas, for the ISTE Conference & Expo. It was our first time being a part of the conference, and it was absolutely mind blowing. Everyone who's anyone in the realm of digital learning was there. Every company was represented, and schools and other organizations came together in a way that is difficult to describe. There was so much to learn, enjoy and receive. I went home with newfound knowledge and unparalleled motivation to propel us forward using all that I'd learned. Even our administrative team — who had previously shown little interest in the ed tech program at the school — returned to CCMS with a highly vocalized drive toward digital learning.

In our second year as a VILS school, we expanded the movement to bring in the majority of the teachers and reshaped our school's professional learning practices. We developed four professional learning communities (PLCs), designated five teacher-leaders within the school, established our own ed tech department within the school, expanded the technologies we used and began collaborating with several other schools, both locally and abroad. We did most of this simply by mirroring the professional development practices the VILS program used.

Today the entire climate of our building has changed. Technology, once viewed as an unnecessary distraction to the learning environment, is now an integral component of our daily educational practices. It's become seamlessly integrated into our lessons. I can't believe how far we are now from where we began. I still remember the days when colleagues searched for ways to avoid having the technology in their classrooms. I can only imagine where we will be in two years.

William D. Simpson has been an educator for 13 years. He began as a language arts teacher and now works as an academic technology coach at Charles Carroll Middle School in Prince George's County, Maryland.

5 things schools should think about before investing in digital

The Innovator Solutions section includes contributions from corporate sponsors and advertisers representing education organizations, businesses, policy-making bodies and other influencers dedicated to transforming education. This blog post was provided by …