Is it OK for teachers to not know the answer? 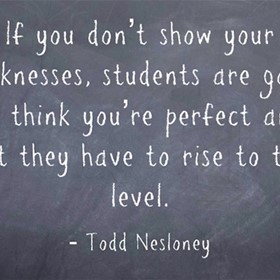 With the Common Core nudging teachers toward projects that develop higher-order thinking skills, it's becoming less important to fill students with information and more important to show them how to find, gather and analyze it themselves.

Yet many educators still feel pressured to appear as though they have all the answers.

"Teachers think they have to know everything and I think that's a trap," said English language arts teacher and education consultant Catlin Tucker, who believes meeting the Common Core begins with posing challenging questions and allowing students to determine how they arrive at the answers.

After creating a video story problem about Foucault's Pendulum, K-12 tech coordinator Ben Rimes raised a valid question of his own:

One of the questions I'm left with then is whether or not we should have educators that would be willing to appear genuinely confused/curious about scientific concepts?

Ira Flatow, the host of NPR's Science Friday, does a masterful job of asking innocent questions that often make me wonder whether he truly knows what he's talking about. It makes me wonder if parents and students would support the same type of activities, or at least guiding questions, in which the educatordisplays a sense of wonderment, curiosity, and perhaps a bit of naivete in hopes of generating interest in the topic by learners. Or would they rather prefer to have content experts doling out the information that learners need, exactly when they need it?

As more educators make the transition to student-centered learning, the role of the teacher is shifting from the "sage on the stage," whose job is to deliver information via the traditional lecture, to the "guide on the side," whose job is to serve as a resource for students as they progress along their learning journey. When the teacher isn't the all-knowing expert, students feel more empowered to take ownership of their learning.

"Instead of saying, 'I'm going to teach you about this' or, 'We're going to talk about this today,' a better idea would be to start with a question: How did natives in Arizona survive during summer?" said educational technologist LeeAnn Lindsey, an advocate for student-centered learning. "If you can start introducing the lesson with questions, that puts the ball back in the students' court."

By appearing genuinely confused about a concept, a teacher not only models curiosity and inquiry as vehicles for learning but deliberately takes on the role of learning partner rather than expert.

Fifth grade teacher Todd Nesloney, a proponent of flipped learning, believes it's important for teachers to openly show their flaws. When his students work on projects that involve knowledge beyond his purview, he's willing to jump in and learn alongside them.

"I lay out my weaknesses before my students very clearly," he said. "If you don't show your weaknesses, they're going to think you're perfect and that they have to rise to that level. This way, they see that I make mistakes but I learn from them."

What do you think? Do you believe teachers should appear to have all the answers, or should they display genuine confusion to encourage students to probe more deeply?