Jeff Charbonneau asks: What is your 'What if?' 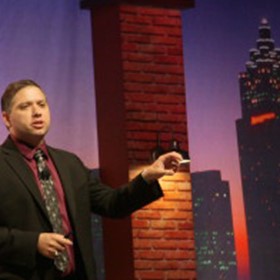 Jeff Charbonneau was named 2013 National Teacher of the Year for a reason. The man gets involved. In his small school in Zillah, Washington, a community of only 3,000 people, Charbonneau wears many hats. He's the high school chemistry teacher. He's also the yearbook teacher and the assistant drama teacher. He used to be the assistant baseball coach. He even serves as an adjunct professor at three universities.

And those are just his job titles. When he's not in the classroom, Charbonneau can be found taking students on two-week hiking trips through the Cascade Mountains, running robotics competitions on the weekends and leading student research teams to local ponds to gather data on frogs.

Despite the wide variety of Charbonneau's many passion projects, they all began with the same question: " "What if?" "

The frog research project, Project Croak, was the answer to the questions: " "What if we could teach differently and embrace curiosity in our students? What if we allowed them to dig in the mud more and get their fingernails dirty?"

The truly inspiring thing about Charbonneau is that he doesn't stop at the question. He doesn't get discouraged or give up even when the " "what if?" " seems impossible. He finds a way.

His robotics competitions, for instance, became a reality despite steep funding challenges the Zillah school district is ninth from the bottom in per-pupil spending in the state because he came up with the idea of partnering with local businesses to pay for robotics kits. He even bought enough kits to send for free to any school in Washington that wanted them so every student could have access to the technology.

To Charbonneau, however, technology is just one piece of a puzzle that also includes high-quality content, and most importantly relationships. All of these pieces, however, are only as important as their end result: reaching and inspiring his students.

" "The goal is not technology. Technology is a method or technique to reach kids, not the goal," " he says. " "The goal is kids showing up on a Saturday showing up for a robot competition. That's awesome, and it all got started by asking, 'What if?'" "