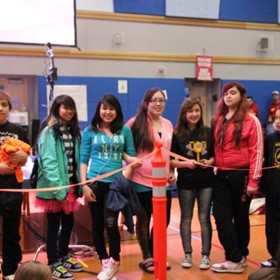 This is a story about kids pushing through failure to achieve phenomenal success. And also robots.

In the rural town of Nuiqsut, Alaska — accessible year-round via air travel — seven middle school students took on the ultimate engineering challenge: Design, build and program a robot capable of executing a series of specific tasks.

As members of the FIRST Lego League, the students would then put their problem solving skills to the test in the worldwide 2013 Nature's Fury Lego Robotics challenge. It was the first time either students or teacher had ever worked with robotics.

"The main goal of Lego Robotics is to build collaboration among students through problem solving," said Kelly Schnittker, a middle school teacher at Nuiqsut Trapper School. "The students are given a set of instructions on the computer to build the parts of the Lego board — this is where engineering comes in. Students follow schematics and pick out the parts needed to build a variety of items. This takes about a week.

"The science inquiry comes in when students are given a list of tasks (22-30) that need to be completed on the game board. As a team, students design a robot to perform the tasks and then program the robot using the Lego Robotics software."

Here's what they learned on their journey:

"There is a great deal of trial and error during this process, and students can become very frustrated," Schnittker said. "The robot goes through multiple design changes and reprogramming, which really helps students learn how to communicate and support their suggestions."

"What was wonderful was when we went to the practice session before the competition, another experienced team came by and showed us how to measure the diameter of the wheel in centimeters and divide by 100 to find out how many degrees our wheel moves in," she said.

"Then we measured in centimeters where we wanted it to go and then multiplied that by the number we got for our wheel. We became very accurate in programming our robot."

3. Things are never as bad as they seem.

"Throughout the project, the students wanted to quit and give up. Attitudes became negative but they stuck it out," Schnittker said. "The team was feeling even more discouraged after arriving at the competition and seeing how well the other teams were doing.

"When it came time to run our robot on the board, the team felt like we were not prepared and would not score any points. Boy, were they surprised when we scored just over 40 points. The smiles came out, and cheering.

"They ran back to the practice room to work on squeezing in a few more programs for the next round. We scored more points on the second round and the kids were elated. I was so proud."

Although the students didn't win in any particular category, the judges gave them a "Rising Star" award for performing well as a first-time team.

"When our name was called I had to tell them repeatedly to go up because they could not believe it," Schnittker said. "The most valuable lesson my students learned was how to work through frustration and discouragement and celebrate each success along the way. Now they can't wait to start it again next year."

In Greenfield Union School District where I teach fifth grade, I’m known as a bit of a technology enthusiast. This means I’m always excited about new ways to integrate tech in the classroom…

The notion that computer science education is essential for all is picking up steam in the United States; however, we still are a long way from making it accessible and equitable for all.…

Quick! How do you get students interested in STEM?

The answer, unfortunately, isn’t easy to pinpoint. With the exception of a small number of math, science and computer whizzes, most middle and high school students — particularly…