Student entrepreneur makes his own learning 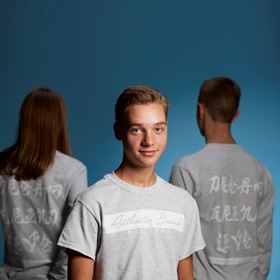 While many teenagers ask their parents to buy them the latest $150 Stussy T-shirt or Supreme streetwear, Sean McCulloch, 16, makes his own.

The Oregon high school student decided to design and produce his original clothing line 18 months ago. Within a year, he started his own label, Authentic Brand Clothing Co, and is now selling his fashions — T-shirts, hoodies and hats  — on the internet using a website he designed and built himself.

The digital age has created an explosion of opportunities for student entrepreneurs like Sean. Free and inexpensive tools make it easier and faster than ever to design, create, research, track, communicate, collaborate and sell. Many students around the world are honing these skills in pursuit of their passions, and they — like Sean — are unwittingly developing the very traits think tanks like the World Economic Forum cite as the most valuable job skills of the century. In fact, these are the same skills embedded in the ISTE Standards for Students.

The birth of a passion

The idea to make clothing germinated when Sean learned to use Adobe Illustrator during a computer class at South Eugene High School. Before long, he was spending most of his free time playing with different designs on Illustrator and loving it. But he knew that if he were to start his own business, he had a lot to learn.

“That class really fueled the inspiration and drive to start my brand,” he says, “because I was able to convert my ideas to actual designs.”

He experimented by putting his design on shirts using a press at home. He sold a few shirts to his friends, but he wasn’t satisfied. He knew his clothing had to be higher quality before he could begin selling his product to the public.

He spent months researching the best prices for both T-shirts and printing, and in the process learned about profit margins.

He was almost ready to launch his business, but still needed money to place his first order. Like many teenagers, Sean headed to the pool on summer break. Except Sean spent his summer working as a lifeguard to earn money to invest in his business.

When fall rolled around, Sean had earned enough to place his first order and had his website ready to go.

Sean’s designs are inspired by popular brands Supreme and Stussy, but his shirts are more reasonably priced to suit teenagers, like himself, who are on a budget. Supreme, and Stussy shirts range from $30 to $150 retail, but might cost much more on the aftermarket. For example the Supreme box logo tee will retail for $34 but might resell for $200+.

“I looked at these brands and knew I could make something that I would want to wear and that a lot of other people would wear,” he says. “Their clothes are built around hype, but I can price my stuff lower because there’s no hype.”

“When I started printing my own prints, I failed, and it taught me that it takes a lot of dedication to keep a business running,” he says. “My advice would be to think of where you want your idea to go and research how to get it there. Once you know how to do something, the next biggest step is dedicating yourself to it until it succeeds.”

Will his business take off and be as successful as the clothing brands he admires? Time will tell. He knows he’s younger than the creators of Supreme and Stussy. He’s also not in New York, but in the small university town of Eugene, Oregon.

For Sean, it’s already about more than just the shirts. He knows that the process of creating his clothing line and starting his own business has taught him some invaluable lessons about work. For starters, it’s really fun to pursue something you love.

“I also learned how to talk to people about my business,” he says. “A year ago, I would have been too shy to do this interview, so it helped my confidence a lot. I’ve also learned a lot about business, like what profit margins are.”

Sean has learned one of the most important skills for entrepreneurs — determination.
“I’m going to spend a lot of time with this one to make sure it succeeds and goes where I want it to go,” he says.

Jennifer Snelling writes about food, travel and education. She lives in Eugene, Oregon, with her husband and two daughters, whom she loves for their innate understanding of technology and for many other reasons.

Read a full-length article on how educators are fostering entrepreneurial skills in their students in the ISTE member magazine entrsekt. Not a member? Join today.