What can educators learn from the maker movement? 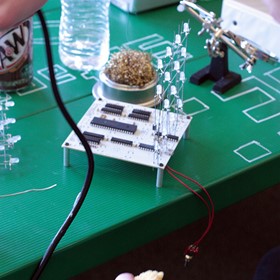 A technological and creative revolution is unfolding around the world: the maker movement, which celebrates using technology to make, repair and customize the things we need.

Hundreds of thousands of adults and children alike are frequenting Maker Faires, hackerspaces and DIY websites to tap into a growing library of literature that inspires learners to seize control of their world. Making draws on the engineering, design and computer science skills of anyone who is willing to dive in and try something new.

Fortunately for educators, the maker movement also overlaps with children's natural inclination to learn by doing.

Digital fabrication devices, such as 3D printers and physical computing — including Arduino, MaKey MaKey and Raspberry Pi — expand a child's toy chest with new ways to make things and new things to make. For the first time ever, children's inventions may be printed, programmed or animated with interactivity. Recycled materials can be brought back to life.

As today's makers freely share their ideas, programs and designs through online communities, students can easily dive in and use other people's ideas as building blocks for their own creations.

Harnessing the maker movement in schools

While school traditionally separates art and science, theory and practice, such divisions are artificial. The real world just doesn't work that way!

The maker community brings children, hobbyists and professionals together in a glorious celebration of personal expression with a modern flare.

To encourage students to become makers, every school should keep these game-changers on its radar:

Computer-controlled fabrication devices. Over the past few years, devices that fabricate 3D objects have become an affordable reality. These 3D printers can output a physical object based on a digital design. Plastic filament is melted and deposited in intricate patterns that build layer by layer. With 3D design and printing, students can combine math, science and craft to design and create their own objects.

Physical computing. New open source microcontrollers, sensors and interfaces connect the physical world to the digital world in ways never before possible. Many schools are familiar with robotics, one aspect of physical computing, but a whole new world is opening up. Wearable computing, for example, incorporates circuits made from conductive thread to create textiles that are smart, flexible and mobile. And plug-and-play devices that connect small microprocessors to the internet, to each other or to any number of sensors offer a low-cost way for students to test, monitor and explore the world.

Programming. There is a new call for programming in schools, from the Next Generation Science Standards to the White House. Programming is the key to controlling this new world of computational devices, and the range of programming languages has never been greater. Modern languages are designed for every purpose and every age group.

Lessons from the maker movement

The tools of the maker movement are amazing, but their impact goes deeper than that. Making is not just a novelty or a trend — it's a stance toward learning. It's a conviction that problems are made to be solved, challenges are fun and "doing" is what matters.

The maker movement opens up endless options to explore what students might find interesting or fall in love with. Giving kids the opportunity to learn about what they love means they will love what they learn.

Some educators say technology is "just a tool" that should fit seamlessly into traditional classrooms. In contrast, the maker movement approaches technology as the essential element for solving unsolvable problems. To makers, a 3D printer isn't just a tool for making 3D objects — it's the raw material for solving problems such as creating inexpensive but custom-fit prosthetics for people anywhere in the world or delivering a pizza to hungry astronauts. The maker philosophy prepares kids to solve problems their teachers never anticipated with technology we can't yet imagine.

Our new book,Invent To Learn: Making, Tinkering, and Engineering in the Classroom , explores the maker movement and makes the educational case for bringing making, tinkering and engineering to every classroom. The book combines theory, history, practical classroom tips and countless resources to help K-12 schools make creativity, construction and children the focus of education once again.

The Common Core and the new Next Generation Science Standards emphasize critical thinking, creativity and digital age skills. Achieving these goals requires taking a hard look at both what we teach and how we teach it. The maker movement offers lessons, tools and technology for steering a new course to more relevant, engaging learning experiences for all students.

Sylvia Martinez is a maker education advocate and co-author of Invent to Learn. Connect with her on Twitter via @smartinez.