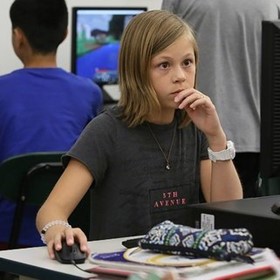 Walk into any game development studio and you’ll see people troubleshooting their own creations, testing each other’s work and iterating again and again.

Students in Isaacs’s game design and development class never know what might happen when they walk in the door. They might get to beta test a new version of Eco, an online game where players collaborate to build a civilization in a simulated ecosystem. Or they might be asked to create tutorials for their favorite game (that would be Minecraft, y’all). They might Skype with a game developer or be handed an Oculus Rift virtual reality headset and asked to discuss with researchers their ideas for how it might be used as a learning tool.

“It’s really powerful for kids to realize they’re being heard,” says Isaacs, winner of ISTE’s 2016 Outstanding Teacher Award. “Beta testing and the whole iteration process is so important. When they’re doing that for another company, they’re seeing how it happens in the real world.”

The tech teacher strives to create a learning environment that feels more like a working studio than a computer lab.

“I’ve been working hard for years to get great resources in the classroom so kids can take their learning in their own hands,” he says. But it’s not just about the equipment. It’s his willingness to take a back seat — giving students plenty of independence and autonomy — that allows them to flourish as video game developers.

He offers the following tips for teachers who are looking to empower their students as game creators.

Give them a quest

When Isaacs’ students team up for group work, they get no specific assignments or predetermined roles. Turns out they don’t need them. Students gravitate naturally toward the aspects of game development they’re most interested in.

“It’s quest based,” he says. “Kids have many different options for how go about meeting the learning objectives. There are a lot of things they could be working on.”

Some enjoy designing the look and feel of the game’s levels. Others relish the coding. Some take on a project manager role because it fits their personality. “It happens so organically, it sort of feels magical,” he says.

“It’s different to see them evolve and create something and modify it and continue to build on it and accomplish more with each step,” he says.

Speaking of end users, the ultimate goal of Isaacs’s class isn’t to create a video game — it’s to publish one. He also encourages them to publish other content, like Minecraft tutorials on Snapguide.

A networked educator who has co-founded multiple online communities and moderates weekly Twitter chats, he uses his digital platform to amplify his students’ work. He pins and tweets noteworthy projects. He forms alliances with real-world software developers and sniffs out opportunities for his students to engage with the broader tech community.

Sometimes tech companies approach him for projects like making video game tutorials or writing a book about a specific programming language. His answer: “I don’t think I’d be the one to do that, but my students would.” That’s how he ended up co-authoring a published book on GameMaker’s programming language with one of his students.

“I’m passionate about student voice and providing students with opportunities to share their work with an authentic audience,” Isaacs says. “In terms of technology, I’m all about content creation. Teaching game design and development lends itself perfectly to encouraging students to create their own content.”

Steve Isaacs was named ISTE’s 2016 Outstanding Teacher. ISTE members can read a more in-depth article about him in entrsekt magazine.

Computer Science for ALL: Where Does Your State Stand?

All jobs of the future will require some computer literacy skills so it’s increasingly important that quality computer science (CS) education is an urgent priority for school systems around the globe.

Although CS has been offered in K-12 public schools for decades, it has not been…