5 ways to use memes with students 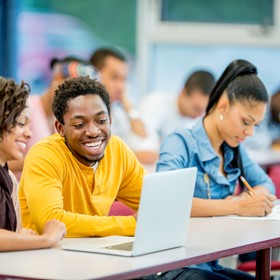 I love memes and enjoy sharing them on Facebook, Twitter or even emailing them to friends and coworkers. But until recently, it never occurred to me to use a meme generator, a fun communication tool, in the classroom.

For those who aren’t familiar with them, memes (pronounced meemz) are a cultural element or system of behavior that is passed from one individual to another. They are often represented by an image with a brief bold caption overlaid and shared on social media to capture attention or elicit a quick laugh.

One night while working hard on my lesson plans, my 14-year-old son decided to poke fun at me by sending me a text with the following meme that he created:

I had to laugh because it was so true. And in that moment, I had an epiphany. What if I asked my students to create math-themed memes? The next day I set out the criteria for The Math Meme Project:

I told them to use one of the many meme-creation tools available to make their original meme. To get the ball rolling, I gave my students a handout with a few examples of math memes that had been published on the internet. Other than that, I didn't give them much direction because I wanted them to figure it out on their own.

Most students already had meme-making apps on their phones, but some students found a few websites online to create their submissions. The students were able to create these memes without any guidance from me.

If your students are younger, you may need to guide them through the process. The task of creating memes is simple once you find the right tool. Meme-creation apps are easy to find for laptops, tablets or smartphones. Search “meme-creation program” in the Apple App Store, Google Play or on your laptop, and many options will come up, including Meme Creator, Meme Generator and Quick Meme.

It’s important to preview any meme program before assigning it to the students to avoid fees or inappropriate content. Most meme-creation programs are free but some charge a small fee for an ad-free version.

Also, some meme-creation programs show other users’ creations, some of which may be intended for a mature audience. Review the meme-creation homepage before inviting the students to the site. It might be best to avoid the webpage all together and just download the app onto devices before the lesson.

By the time the due date arrived, I was delighted to find 38 students had turned in more than 100 memes! And I was struck with a revelation: Memes are a great educational device for teachers and students alike to promote clarity, pedagogy and humor.

I was so proud of my students’ creations that I handpicked the best of them and included them — along with my son’s and a few of my own — in a video that I posted on my YouTube channel and shared it with my students.

I used the same project the following year as an extra credit opportunity with my math students. To introduce the project, I showed my classes the video from the previous year and encouraged them to create their own memes. As a result, I received almost twice the submissions as the year before. However, I ran into new problems with Math Meme Project 2017 video, namely having to be more selective to keep the video from being too long and to remove those that had political leanings.

This project has inspired other teachers to replicate this project with their classes. Bernadette Bogacki, a math teacher at Washington Township High School in Sewell, New Jersey, tried it with her Algebra 2 and Pre-Calculus students. She said the students enjoyed being able to think about math in a fun and imaginative way. “It helped to make the concepts more accessible in their minds — less stressful in a way. They really enjoyed collaborating with each other, sharing ideas and laughing in the process.”

Using memes as a tool

Here are some ways you can use memes in your classroom.

Create class rules. Make a meme for each rule and post them in the classroom. As an alternative ice-breaking activity on the first day of school, ask students to create their own memes based on the rules and share the best ones with the class or post on the bulletin board.

Identify the novel. Students can use memes to dramatize a point from a novel or short story they are studying. Teachers can break the class into groups and have each group create a meme from assigned chapters in a class novel.

Emphasize a historical event. Teachers and/or students can import an image into a meme-creation program and make their own meme with a witty subtitle.

Aside from being a fun and novel way to get student engaged in content, these assignments can address the Creative Communicator standard, part of the ISTE Standards for Students, which expects students to communicate clearly and express themselves creatively for a variety of purposes using the platforms, tools, styles, formats and digital media appropriate to their goals.

Memes can also allow student to share messages around the topics they are passionate about to muster support for social justice issues, which is one of the five digital citizenship competencies of the DigCitCommit initiative.

This is an updated version of an article published on the ISTE Blog on Dec. 2, 2016.

Sharon Serano is a math teacher at Washington Township High School in Sewell, New Jersey. Follow her on Twitter @MrsSerano and check out her YouTube channel www.youtube.com/c/SharonSerano.