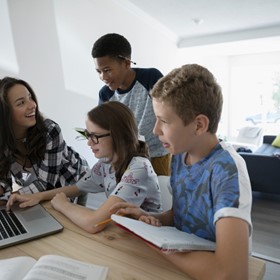 Nearly 5,000 miles separate Paris, France, from Lopez Island in the state of Washington. Middle-school students from these far-flung locations worked together to research, curate and share the otherwise forgotten stories of World War I American soldiers buried abroad.

Students brought history to life for cemetery visitors with the use of an app and are inviting others to join their efforts through a crowdsourced website. The Monuments Project doesn’t just teach students about history. It challenges them to do the work of historians. In the process, students learn what it means to be engaged global citizens who can leverage technology to collaborate, research, educate and motivate others.

Tom Neville is a history teacher at the American School of Paris, a project-based learning veteran and director of a nonprofit called THATClass.

He was inspired to design this project when he learned that a student’s father worked for the American Battle Monuments Commission, which maintains cemeteries abroad. In a follow-up conversation, the parent explained, “We have all these soldiers [buried] at Suresnes [a cemetery in France] whose stories aren’t told.”

Neville’s response: “That’s a perfect problem statement.” The project idea grew from there.

Initially, the Monuments Project involved only Neville’s middle school students. They were quickly engaged by the real-world task, which challenged them to develop and apply historical thinking.

“We start without tech,namely with Eleanor Duckworth’s critical exploration approach," Neville explained. "It forces students to patiently observe, to ground observations in specific evidence others can see, to listen to others’ observations, to identify patterns between observations, to be comfortable sharing uncertainty and simply being in a state of uncertainty, and to embrace the idea that there always might be more you didn’t notice or know.”

Technology quickly came into play, however, as students began reaching out via email and videoconferencing to archivists and curators of special collections. Being immersed in the process of history took learning to new heights. Excited students would often corner Neville in a hallway before class even began “and tell me how ‘their archivist’ got back to them.”

Neville collaborated with colleagues from his own school, including learning coach Claude Lord who supported technology integration. Her goal as a coach was to help teachers “embed technology in a seamless way so that pedagogy takes over to engage students with authentic projects that would not have been possible before.”

Once the project was underway, Neville read about a school in remote Lopez Island that was using technology to connect with the world.  He reached out to social studies teacher Anthony Rovente, who was quick to see the value of a transatlantic collaboration.

The Monuments Project has continued to expand, with more schools joining from New York and West Virginia. As Neville explains, “The individuals buried in Suresnes come from almost every state. Imagine having a few [schools] from each state join. Then imagine attempting the same at other American cemeteries with international schools in other countries serving as the local liaison.”

This project meshes nicely with the Global Collaborator standard within the ISTE Standards for Students. That standard instructs students "to use digital tools to broaden their perspectives and enrich their learning by collaborating with others and working effectively in teams locally and globally."

As Neville says, "There’s no better way to get students from all over engaged in telling untold stories and developing real skills in the process.”

Suzie Boss is an author and educational consultant from Portland, Oregon. She has written several books for educators, including the ISTE bestseller, Reinventing Project-Based Learning, 3rd Ed. She is a regular contributor to Edutopia and a member of the Buck Institute for Education National Faculty. A frequent presenter at education conferences, she has helped project-based learning take hold at schools in India, Europe, Mexico and South America, as well as all over the United States. Follow her on Twitter @SuzieBoss.

This is an updated version of a post that originally published on June 21, 2017.

Fostering collaboration in the classroom is vital in preparing our students for life. Working in groups can be challenging, which is why implementing an agility framework can become a powerful tool. Developing an agile mindset will empower students to take ownership of their learning while…