Inspire students to take their projects into the real world 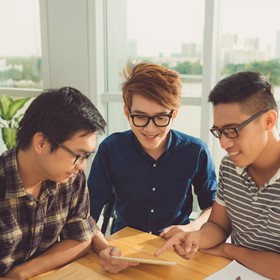 Imagine a class project so engaging, so inspiring, so intriguing that students can't stop talking about what they learned, where it took them and, in some cases, how they plan to continue their investigation outside of class.

That is the essence of strong project-based learning — off-the-chart student engagement.

Take, for example, an early elementary project where students learned about states of matter, buoyancy and density by building small boats. With the project complete, students asked, " "What if we built a real boat?" " And they did.

Jane Krauss, co-author of Project-Based Learning: Your Field Guide to Real-World Projects in the Digital Age with Suzie Boss, provided the boat project as an illustration of what makes for the best PBL projects — the ones that drive authentic learning and inspire student passion.

She also points to what she calls the " "sniff test" " for engaging PBL projects. The best projects drive critical thinking and ask students to:

When you hit on a PBL project that's popular with students, the learning opportunities spiral. " "That's when students are so into it that they don't want to let it go," " Boss said.

She saw that happen with a group of high school seniors who wrapped up a class project in the fall but continued working on the concept on their own time through February in order to present their findings at a city council meeting.

" "You don't always know where a project will take you. Be open to students who want to take it in a direction you couldn't imagine," " Boss advised.

Last week, many from the ISTE community provided examples of PBL projects that have had just that kind of impact. Here's a rundown of the top project prototypes:

Pinocchio on Trial. This well-loved project had students compare laws in the U.S. to those in Italy with the help of a local judge and a college student who was studying abroad in Florence, Italy. Students used the Adobe Connect web-conferencing tool to communicate with the college student overseas. They interacted with the judge both in person and via email. Then the students used the laws they learned about to put Pinocchio on trial. Students worked in teams — defense, prosecutor, jury and judge — to create a script for the trial using evidence from the book Pinocchio. The class then created a book of their own using their scripts and photos from the trial they held.

Build a Roller Coaster for Fantasyland. This popular project asked students to imagine that Disneyland had just hired them to create a new rollercoaster for an expansion of Fantasyland. Students read several fairytales and selected one story to serve as the theme for their rollercoaster model. The coaster, which they created using JASON Digital Lab Coaster Creator, had to include the elements from the fairytale. After creating their digital ride, the students built models using Legos.

Teen Issues PSA. Teaching literary themes takes on a high-tech twist with this project, which had students create public service advertising videos about teen issues after reading Romeo and Juliet. Students were asked to select an issue they were passionate about and then create a persuasive video using iMovie to inform an audience about the topic, raise awareness and provide solutions. Videos covered issues such as suicide, eating disorders, bullying and gangs.

Ancient Mesopotamia Farming. Adapted from similar project called from The Tech Museum of Innovation, this popular project required students to build a working model of a river system that solves the problems of drought during planting season, flooding during harvest season and the basic transportation of water to fields. Students used Google Sheets to collect data on their stream tables in science class and to gather collaborative data. Working in both science and social studies classes, students also created presentations that showcased their learning using pictures, video and drawings of the systems they built. Because the students live in a farming community that includes various irrigation systems, they were able to connect their learning about ancient irrigation to current methods.

Some Students Pursued Passion Projects During the Pandemic. What Happens to Them Now?

Matthew Cerza, a teenager from San Mateo, California, wanted to break that isolation. So he set out to find a way…

In project-based learning, students achieve better results when they receive feedback and have time to make improvements in their final products or solutions. The same is true for PBL teachers. Critique and revision will help you improve projects so that your students experience high-quality…