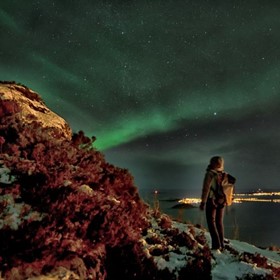 When it comes to the night sky, auroras have captured the human imagination like few other celestial phenomena. The eerie green lights of the aurora borealis figure prominently in the myths and legends of northern indigenous people — and, more recently, an entire tourism industry has cropped up around spotting the often elusive spectacle.

Created when charged particles from the sun strike the atoms and molecules in Earth’s atmosphere, causing them to light up, auroras can be difficult to predict. To help improve the ability to forecast these awe-inspiring events, NASA space physicist Liz MacDonald launched Aurorasaurus, a citizen science project that asks sky-gazers to report aurora sightings and uses the data to create a real-time map of space weather activity. The site then notifies users when the northern lights are likely to be visible in their area.

“Space is so huge, and our satellites are very few, so it’s really hard to predict where the aurora will be visible,” MacDonald says. “What we wanted to do with this project was create a network where people could increase their chances of seeing the aurora and also contribute by letting us know whether they are successful. In the process, we’re building better predictive models about the visibility of auroras.

“And if we’re getting a lot people out looking at the sky, we might discover other rare types of phenomena we don’t yet know about.”

While the northern lights are most often visible near the magnetic poles in Alaska, parts of Canada, northern Greenland and the Scandinavian coast, occasionally a violent solar flare will make them visible in more populated areas closer to the equator. MacDonald developed the Aurorasaurus project after a 2011 solar storm produced red auroras visible from Alabama.

For educators seeking new ways to get kids excited about science, auroras — almost mystical in their appeal — offer a cross-disciplinary entry point that spans the humanities as well as physics, chemistry, astronomy and technology.

Even if they can’t see the northern lights from their own backyards, students all over the world can study how space weather affects what’s happening on the ground.

“In addition to light, the sun also give us radiation, which impacts Earth’s space environment and magnetic field,” MacDonald says. “It affects our satellites and causes the aurora. By studying auroras, we can understand more about how technology both in space and on the ground is affected by the radiation coming from the sun. Everything from satellite TV to electrical grids on Earth can be affected by the weather in space.”

As part of NASA’s Space Science Education Consortium, which includes ISTE and other organizations, MacDonald is working with teachers in Alaska to create lesson plans and classroom activities that incorporate seeing and reporting auroras through the Aurorasaurus citizen science project. In the meantime, educators can use the project as a springboard for studying auroras and other space weather. For example, they can:

Regardless of where they live, teachers and students also shouldn’t rule out the possibility of spotting auroras, MacDonald says.

“You can see it more often than you think,” she says. “It’s the kind of thing where you look up at the sky and your jaw just drops. It’s green and pink and red, and sometimes purple, and it’s moving across the sky, doing a complex dance way out in space.

“Really, it’s the unknown — something amazingly beautiful you can look up with wonder at.”