Use Dungeons & Dragons to engage all students! 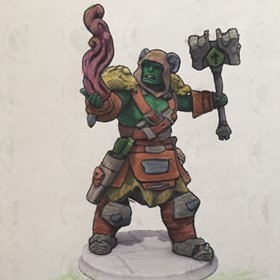 Groog's dark knuckles turned white as he tightened his grip around the handle of his war hammer. Battle. He could smell it coming. He had followed his compatriots into deadly situations before and they had always been victorious. Would this time be any different?

A kidnapped prince, a stolen jewel and an ancient evil were all hiding someplace in this dungeon. Groog, along with his merry band of misfit adventurers, crept down the corridor. The human named Ritt led the way, her nimble fingers feeling the walls searching for any sign of a mechanism that might spring out to separate heads from shoulders.

Behind her, clutching an ax with both hands, was the small ball of tattooed muscle named Rolf, the dwarven heir to the throne of Moldva. In the center of the party, almost completely obscured by the others, was the 3-foot-tall, purple-haired gnome wizard named Dhaboo. The ring on her left index finger radiated a purple hue, which drifted out to envelope her body in magical protection.

Groog brought up the rear. He preferred to be in the back. From this vantage he could easily gaze out over his comrades and mutter a short incantation of healing should the need arise. His half-human, half-orc frame cast a shadow over everyone marching through the decrepit crypt.

Four heroes, each from different backgrounds, united as a decisive unit to thwart villainous plans. Their individual strengths and abilities weaved together to form an unstoppable fighting force for good. Confidence surged in Groog as his thoughts drifted to their past triumphs. Why should this quest be any different? The prince would be saved. The jewel would be recovered. The ancient evil would fall. His team, working like cogs in a machine, each playing their own part, would be victorious.

Groog is actually a character created and run by Colin, a 16-year-old boy with autism. He is working on his individualized educational goals, which include improving his ability to communicate and cooperate with others. Each of the other heroes are also the alter-egos of other students working on their own goals. The students make decisions to guide the actions of the characters to collaborate on achieving the objective of the adventure. An educator is present, too, asking guiding questions to help the students learn how to consider positive choices.

D&D no longer a game for awkward teens

One of the most successful gaming franchises of all time is Dungeons & Dragons, a collaborative tabletop role-playing game where players create unique characters and work together to craft a story filled with drama, intrigue and adventure. Players create and run heroes, each with their own characteristics and traits, who cast spells, fight monsters, thwart nefarious plans and (hopefully) save the day! Dice rolls help determine outcomes of player choices. A dungeon master guides the adventure and coordinates game play.

Dungeons & Dragons has never been more popular. What once was largely considered a pastime for socially awkward teens who kept themselves isolated in their parents' basements has grown to gain mainstream popularity. Shows like " "Stranger Things," " " "Big Bang Theory," " and " "Community" " tapped into the nostalgic fondness of those teens who have now grown up. These popular shows also helped illustrate to those who never played just how fun it can be.

Following the model used by most online educational tools, Wizards of the Coast (WoTC), the company that owns and manages the license for Dungeon & Dragons, provides a set of beginner rules for free to help get started. These rules are available digitally in PDF or web-based versions, which also makes the game accessible using text-to-speech tools for individuals who prefer or need to listen to the content. Once hooked, players can choose to purchase core rule books and pre-planned adventure modules in paper-based or digital formats. In November 2017, the company released a supplemental rules book titled Xanathar's Guide to Everything which reached #12 in Amazon's list of best-selling nonfiction, proving that the game has emerged from the dark shadows of the basement to take its place in the light of day.

The renaissance of contemporary education has issued forth a new age of standards for what skills students should work to achieve. The ISTE Standards for Students provide a guide for the end game. The objective is to help individuals learn how to take ownership of their learning, make positive contributions to society, and analyze and use resources effectively while working together to build innovative new solutions to problems. What was once thought of as the R's (reading, writing, and 'rithmetic) have grown to include the C's of creativity, communication, collaboration, cooperation, contribution, critical thinking, computation, compromise, and community. These new C's aren't meant to be accidental, ancillary byproducts of educational practices but, instead, are the focus and intention of the design of instructional experiences.

Further, the Student Standards aren't meant for the few or the elite. According to the Every Student Succeeds Act and the National Educational Technology Plan, the charge and expectation is that these skills are meant for the masses. Every individual, regardless of ability, has the right to an opportunity to learn these skills. This includes students with disabilities.

Dungeons & Dragons provides a platform for students of varying abilities to practice all of these skills in a safe, enjoyable environment. The core design element of the game invites players to work as a team to analyze and solve problems. Players use a combination of logic, strategy and creativity to think through different scenarios to achieve an objective. The dungeon master throws obstacles in the way, such as mazes, puzzles, traps and monsters, which the players must work together to overcome. The goblins have stolen your horses. What do you do? The magical chest is on an island in the middle of an acid-filled lake surrounded by venomous snakes. What do you do? Your ally lies bleeding on the floor with ghouls closing in while the evil wizard is attempting to escape on the back of the wyvern. What do you do? These challenges can be constructed and scaled based on the abilities of each learner.

The story elements of the game lend themselves to learning about character, plot and narrative structure along with other aspects of literature. Characters' statistics, dice rolls, in-game economics and other mechanics, such as spell and weapon attributes, all contribute to the computational and mathematical aspects of the game. Some gaming groups create online journals documenting their adventures, providing an opportunity for practicing digital literacy, resource curation, as well as a place to display student-created artwork inspired by the events in the story. The collaborative nature of the game lends itself to working on social-emotional and communication skills. What is practiced while playing in a fantasy gaming session can then generalize to other endeavors in the tangible world.

Examples of educators using Dungeons & Dragons to help individuals with and without disabilities learn 21st century skills and achieve their goals have never been more prevalent. Organizations like Game To Grow, provide therapeutic and educational gaming experiences that intentionally guide players through a facilitated experience.

Players like Colin work on improving their social skills by interacting with the other players in the gaming party. By designing a customized adventure, educators structure opportunities to target individual needs and then hone skills through guided practice. The game, however, isn't necessarily just used for therapy. Kade Wells, a ninth grade English teacher near Houston, Texas and Michael Milliman, a fifth grade teacher near Buffalo, New York, have infused aspects of the game into the general design of their instruction. Educators like these invite students to become heroes of the realm to learn content that can then be used to defeat villainous foes. Commercial tools, such as Classcraft, provide educators with a way to incorporate role-playing elements throughout the curriculum.

If you think it's time you rolled initiative and tried to design awesome educational experiences using Dungeons & Dragons, here are some practical tips.

Beyond the therapeutic and educational implications of Dungeons & Dragons, there is an additional element that makes its implementation appealing. It's fun!

Gaming, by its very nature, is engaging. When people play games like Dungeons & Dragons, they commune around a table. Raucous fits of laughter and smiling faces are the sights and sounds that fill the room. While playing, working on educational goals becomes an experience filled with joy. Learning through the game becomes something appealing (rather than a chore). When learning becomes fun, the great needle measuring how people perceive education shifts from that of necessary obligation to that of willful embrace. Individuals look forward to the next educational experience because the past ones have been enjoyable.

So, grab some dice, gather your party, roll up characters, and head out into the expanse of your story in search of adventure. Will you conquer the dragon? Will you get the treasure? Will you level up? Begin your journey to discover the magical effects the game might reveal. Design educational experiences infused with the spirit embodied by Dungeons & Dragons. They are bound to be critical hits!

Christopher R. Bugaj, MA CCC-SLP is a founding member the Assistive Technology Team for Loudoun County Public Schools. Chris is the co-author of the ISTE book The Practical (and Fun) Guide to Assistive Technology in Public Schools and has designed and instructed online courses for ISTE on the topics of assistive technology and Universal Design for Learning. Chris has presented over 250 live or digital sessions at local, regional, state, national and international events, including TEDx. His latest book The New Assistive Tech: Making Learning Awesome For All, also published by ISTE, will be available in May of 2018.

7 ways to make remote learning accessible to all students