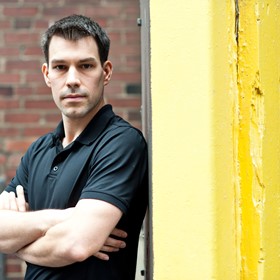 Michael Furdyk is a child of the computer age.

In 1985, when Furdyk was 2 — one year older than the first Apple Macintosh — he began playing with a Commodore 64, an early and hugely popular antecedent to today’s powerful desktop computers.

“I was hooked for life,” he says in the bio on his website. “Something about the freedom of the blinking cursor — the ability to question, to try, fail and try again. It captivated my imagination and led to a series of amazing adventures.”

Furdyk’s childhood captivation with computers turned into a lifelong vocation.

Today, Furdyk, a 32-year-old Toronto resident, is the co-founder of TakingITGlobal, a nonprofit that provides innovative global education programs designed to empower youth and educators to understand and act on the world’s greatest challenges. Programs aimed at getting youth involved include micro-mentorships to help young entrepreneurs launch new ideas, nationwide art competitions and online petitions.

How a hobby became a lifelong passion

In middle school, Furdyk became one of three co-founders of a web company called MyDesktop, which reviewed the latest technology products and developments. Three years later, MyDesktop was sold, and Furdyk started a site called BuyBuddy, which helped consumers find the best prices for technology products.

He started TakingITGlobal (TIG) in 1999, when he was a senior in high school, because of his frustration with his own learning experience. The idea was to focus on informal learning by creating a social network for social good that connects students to real-world problems, he said.

When TakingITGlobal started, Furdyk said he thought it would mostly be an informal learning network for students, with discussion boards, a global directory of nonprofit organizations to help students find out more about social issues and a rudimentary "profiles" system to highlight information about users so they could connect with one another.

“Little did we know, just a few years later, the idea of ‘social networks’ built around member profiles like ours would explode!” he said.

Today, TIG aims to provide a pathway to action by offering resources to engage both students and educators, he said.

“Technology enables that in ways that were never possible before,” he said.

One such resource is International Days, which showcases dozens of internally recognized dates around the world that students and educators can align to projects and activities, helping to attract media attention and contributing to global movements. Another is the Global Gallery, which features over 40,000 pieces of youth-created artwork from more than 100 countries, providing a unique window into the lives of those living elsewhere, and their culture, local issues, and unique perspectives, he said.

TakingITGlobal is used by 5,000 schools in 150 countries and more than 40,000 teachers, Furdyk said. In the last year, the site reached more than 3 million students.

Exposing students to many perspectives

Technology is central to TIG’s ability to deliver programs, Furdyk said. Most of the programs and resources it offers are made possible by the internet. Unlike social networks, such as Twitter and Facebook, where users see content only from their friends (or friends of friends — a small circle or "filter bubble"), TakingITGlobal's community is open and global, exposing members to content and perspectives from nearly every country in the world, he said.

As a nonprofit, TakingITGlobal relies on a mix of funding from government, foundation and corporate sources, as well fee for service, providing professional development programs for teachers. But most of the organization’s programs and resources are free for students and teachers, he said.

In 2006, TakingITGlobal launched TIGed, a more formal platform that offers graduate-level, accredited courses and in-service workshops for educators. It also offers a chance for educators to connect with peers around the globe.
TIGed provides scholarships to educators from developing countries to participate free of charge its e-courses. A new course, Education for Social Innovation, is helping educators investigate the growing role technology can play in pedagogical documentation while helping students co-design projects to support positive social change in their communities.
TakingITGlobal has engaged students around the globe in several initiatives, including DeforestAction, which focuses on raising awareness about deforestation in the Asia Pacific region, and Global Encounters, a video conferencing program connecting classrooms with experts and change-makers in dozens of cities around the world.
Using TakingITGlobal’s mobile app, Commit2Act, students track their actions that reduce their impact on the planet — for instance by planting a tree or using reusable lunch containers. Students were broken into teams and competed to take as many actions as they could. More than 40,000 actions occurred last year, Furdyk said, and the program is continuing.

Ultimately, Furdyk believes that the integration of the values of global citizenship, environmental stewardship and student voice that TIG is helping schools measure through Future Friendly Schools can help educators and systems drive student engagement to new heights around the world.
“It’s about the immersive use of technology — but we’re trying to put values first so the technology makes sense,” he said.

As both a network and certification program, Future Friendly Schools is TIG’s attempt to help schools measure, understand and celebrate the integration of global citizenship, environmental stewardship and student voice into their culture and learning.

Through a student- and educator-driven survey and evidence portfolio process, TIG provides schools with insights on their strengths and opportunities for improvement, while connecting them to a global network of peers to collaborate and learn from.