Wegner's ed tech accomplishments get nod from Obama and peers 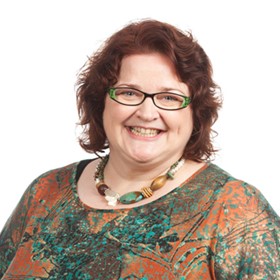 There she was in the White House, along with 120 other school superintendents, and there was President Obama, at the podium. And then there was this:

" "And then you got Mary Wegner, superintendent of the Sitka, Alaska, School District. Where's Mary?" " Obama said. " "She came a long way. There she is. Yeah, give her a hand for coming from Alaska." "

Speaking at the White House Summit on Technology and Education, the president recounted the sorry state of technology in Sitka when Wegner was hired as assistant superintendent in 2010: Only a few people could print documents. Logging on to the internet might take 20 minutes. Bandwidth was a joke.

Today, the whole district has Wi-Fi, students are Skyping in class with experts all over the world, and Sitka is now in the top tier of districts in Alaska, Obama said. (Skip to minute 13 of this video to hear Obama's remarks about Wegner.)

Wegner, in an interview, said the White House event was " "transformational." "

" "It's connected me to lots of ideas and people around the nation," " said Wegner, who was named Sitka superintendent in 2014. " "We've self-identified as people who really do want to make a difference in their districts." "

Wegner, a longstanding and active member of ISTE, said she's excited by the idea of what 120 superintendents working together can do to benefit the entire nation.

The White House summit was part of the administration's ConnectED initiative, which seeks to bring high-speed internet access to every district in the United States.

" "And this is why it's important: Right now, fewer than 40 percent of public schools have high-speed internet in their classrooms," " Obama said. " "That's not good, since we invented the Internet." "

Bringing the focus back to technology

Wegner confirms what Obama said: Technology was way behind the times when she was hired to be superintendent of Sitka schools.

A Minnesota native, she had previously taught technology in Sitka before taking a position as an assistant professor at University of Alaska Southeast and then serving as technology coordinator in the Anchorage School District.

She said the Sitka district was investing in technology during her first stint there and " "doing amazing things," " using interest earnings from district bank accounts to fund projects. But when the recession hit and interest rates took a dive, funding for technology dried up.

During the nine years she was away from Sitka, " "there was no focus on technology, no systems in place," " she said. " "If a computer broke down, it stayed broken." " It took 20 minutes to log on and authenticate to the middle school server. The high school librarian had to personally authenticate any document that a student needed to print. There was no wireless network.

Things began to change after the Sitka School Board held its annual meeting with student body representatives during the 2009-10 school year. Students came to the board with a resolution that said, in effect, " "You are not preparing us for our future," " Wegner said. " "We need access to technology tools." "

Board members were moved. They agreed to fund technology and to conduct a technology audit in 2010. They installed a wireless network and vowed to increase the technology budget each year.

By the time Wegner returned to Sitka, the district had completed the technology audit and completed hardware upgrades but had no one to lead the effort. Wegner, who earned her Ph.D. in educational technology from Pepperdine University, had run the ed tech department in the Anchorage district.

" "I came in with the express desire to figure out how to utilize these resources," " she said.

She organized training for teachers, so they could train other teachers. Within a year and a half, virtually every classroom had interactive whiteboards, close to half had student-response systems, and 90 percent of teachers were at least proficient in the ISTE Standards for Teachers.

Keeping an eye on student learning

The year before Wegner arrived, the Sitka district obtained a competitive technology grant that enabled the district to train the sixth grade teaching team, because sixth graders were having a hard time making the transition to middle school.

The grade's math, science, English and social studies teachers, plus the technology teacher, underwent a year of professional development and received technology tools before anyone else in the district.

" "What happened was the sixth graders were so excited about technology that pretty soon the talk at the school board and at kitchen tables around the city was about how excited the students were," " she said. " "We were presenting a model for the classroom down the hall. We let the choir sing." "

Jason Ohler, a professor emeritus of educational technology at the University of Alaska, has worked with Wegner for two decades.

She understands how to use technology in the teaching and learning process while keeping her eye on the real goal, he said: Student achievement and empowerment.

" "Sitka was languishing in this regard until she arrived," " Ohler said. " "Sitka's turnaround is completely her doing. She had the vision and the skills to make it happen. The shout-out she got at the White House was totally deserved and not at all surprising." "

Speaking out from the edge of the continent

Sitka is a lush, green island community on the edge of the Pacific, with 9,000 people and 1,300 students. That rural setting makes technology all the more important, Wegner said.

Wegner, a member of ISTE's eight-person Public Policy Committee, became involved with the organization through her membership in the Alaska Society for Technology in Education, Alaska's ISTE affiliate. When she became ASTE treasurer, she connected with ISTE.

" "I was the one person in Alaska ISTE sent information to," " she said. As ISTE boosted its advocacy agenda and sent out information to affiliates about its activities, " "I felt a responsibility to pass that on to the membership, so it didn't sit in my inbox and die." "

She views her role as an advocate for technology in education as critical for ensuring students are prepared to thrive when they leave school.

" "If you look at living in a democratic society, it is a citizen's responsibility to communicate with policy makers and legislators on what we need," " she said. " "If we don't say what we need, and if we don't have a loud voice, we're always on the whipping post.

" "This is our future. If we don't take an active role in shaping it, or at least making an attempt to shape it, then bad on us," " she said. " "It's our responsibility." "