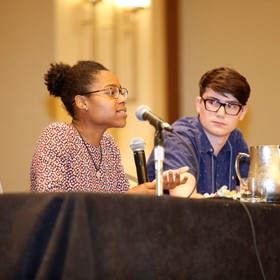 The idea of reaching beyond the textbook isn’t a new concept. As any veteran teacher can tell you, two pages of explanation on an event in American history, for example, doesn’t begin to cover the topic. Folks like John Bernia, principal at Oakview Middle School in Oakland, Michigan, have always looked for additional resources — technology merely streamlines the possibilities.

To know where to start, you need a destination. From the student perspective, it’s a matter of making technology part of their lives: a seamless tool that hands them not a netbook but excitement for learning.  That’s why student centered learning was the hallmark of Lead & Transform: An ISTE Town Hall session at ISTE 2015. A five-member panel of education leaders explored the next generation of student learning.

For instance, when you ask Tiarra Bell, a rising senior at Science Leadership Academy in Philadelphia, what student-centered learning means to her, she doesn’t mention a word about tools and software. Instead, she embraces school because “the teachers are human and care about your life.” Bell prefers projects over standardized tests “because those don’t show what I can do or who I am.”

In other words, the goal is to use technology to help students find their best. Here are practical steps you can take right now to make that happen.

Let the students own the classroom. Panelist Pernille Ripp, who teaches seventh grade at Oregon Middle School outside Madison, Wisconsin, says she encourages her students to move desks, sit on the floor, change the physical environment every day if they like. “It’s not about me so it can’t be my classroom, so it doesn’t say, ‘Welcome to Ms. Ripp’s classroom.’ Instead it says ‘Make amazing, glorious mistakes,’” she said.

Lean on the kids to tell the community about their schools. It doesn’t need to be a formal dog-and-pony show. It can be as simple as inviting some business connections to attend students’ classroom presentations. Ask kids to teach their parents a new computer skill on parent-teacher night. Make a YouTube video asking students why they like learning. The students themselves can be your most enthusiastic ambassadors showing how powerful learning is shaping their lives.

Listen to teaching staff. You knew this would be on the list, but few principals can explain what it looks like. It boils down to not talking at staff meetings, Bernia said.

Understand you are asking for a paradigm shift. In a student-centered learning classroom, the teacher doesn’t have to know everything. It’s OK for students to teach each other and the adults in the room. Principals need to make it safe by supporting an “our” school environment.

Feed them. Literally as well as figuratively, Bernia has found. He holds sessions called Big Thinks where he will throw out a scenario (“We have no new monies, no new devices – where would we go from that point?”) and ask his teachers to offer solutions. He’s not above using the substitute teacher budget to fill classrooms with instructors for a half day to give his full-time educational staff time for these discussions.

Offer teachers ways to play with technology, too. Human beings come with a mental block that often prevents them from grasping a concept until they’ve lived it.

Just ask. Patrick Larkin, assistant superintendent at Burlington Public Schools in Massachusetts, invites teachers to talk about what they want and need. And that tends to be more useful than training session they spend months planning with tight agendas.

Go into the classrooms rather than stand in the halls. Carl Hooker, director of innovation and technical learning at Eanes Independent School District in Austin, Texas, became a student for a day at Westlake High School. He dressed in high school attire and attended classes as if he were a student.

“That was the most eye-opening professional development I’ve ever had. As a leader, I got to see what decisions we made and what kind of impact that has on our students and on our teachers,” he notes. Sadly, not a single student thought he was a high school student.

Dig into the infrastructure. Teachers won’t embrace new philosophies if they keep getting kicked off line and feel stupid in front of their students, said Barbara Nemko, superintendent of Napa Valley Schools in California. Her district invested in a wide-area network to skirt what she calls the Christmas tree light syndrome, where one failure takes down the whole string.

Ask technology to do the heavy lifting. In the classroom of the future, Hooker sees wearables handling mundane, rote tasks like taking attendance. “Let technology help with low-hanging fruit. The teacher provides the creativity,” he said.