Every student needs to be a problem-solver 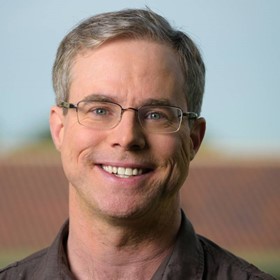 As a 15-year-old high school student, Andy Weir worked as a lab assistant at Sandia National Laboratories. He said the role, open to strong local students, typically involved jobs like cleaning test tubes. But on a day when there were apparently no test tubes to clean, he was tasked with creating software to help analyze lab data.

“Here’s a computer and here’s a book on coding. Figure that out,” Weir, author of the #1 New York Times bestseller The Martian (also a film starring Matt Damon) and the bestselling novel Artemis, recalls being told.

And so he sat down at an IBM 286 and taught himself to code in Straight C. Thus begun a 25-year career in software development – and in problem-solving and critical thinking, things he says still thrill him.

“I get satisfaction from solving a problem. I think everybody does to a certain extent. Even if it’s just repairing a light switch at home, I have a high for the next four hours and think I’m ready for MIT!”

Weir points out that problem-solving comes into play no matter your profession, or the future professions of today’s students. “If there were no problems to solve, you wouldn’t hire someone, so every single human needs to have good problem-solving skills.”

And today’s students need to hear about how the ability to be solution-finders plays out in the workforce.

“People stress to kids to find happiness, but you also have to acquire resources, and those two things don’t have to be linked. It can be a means by which you make money, and you can find joy elsewhere,” Weir says.

“When I had to make my decision about what to study in college, I considered being a writer, but I like regular meals so I went into software,” he jokes. “It’s unwise to ignore the economic implications of career choice. Just because you want to be something, it doesn’t have to be your profession.”

In his case, that thinking led Weir to do his creative writing on the side as he worked in software development, creating games for Blizzard, doing backend work for AOL and creating business software for mobile phones at MobileIron.

All along – in fact since childhood when he jotted down sci-fi stories starring kids in a notebook – he continued to write. During a layoff and with a healthy severance check, he posted chapters from a book he was writing for free on his website, until technology advancements allowed him to post The Martian for download on Amazon.

Even as the book earned acclaim and was being turned into movie, Weir continued to work as a computer programmer. “I liked it because I liked the challenges,” he says.

So he espouses a search for balance when it comes to preparing students for their futures in the workforce. “It’s not joining the machine as a cog. There’s a balance. Find something you enjoy that also makes money. All major trends in society ultimately come down to economics.”

And encourage creation. That was the case with Weir’s junior high school civics teacher, Mrs. Forté, who wrote in his yearbook, “I look forward to reading sci-fi by you some day.”

He later sent her a signed copy of The Martian to show his thanks, because her confidence in him made an impression.

“Encourage it. Spend some time with them and make sure they understand that whatever they are interested in is not a pipe dream – that it can happen!”

Don’t miss Andy's Tuesday morning keynote at ISTE 2018. Immediately following the keynote, Andy will sign copies of his books, The Martian and Artemis in ISTE Central.