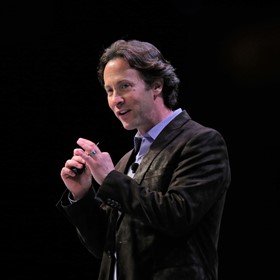 They have trouble concentrating in class. They’d rather Google an answer than memorize it. Their focus constantly shifts from one thing to another so fast it’s hard for adults to keep up.

While it’s easy to label these traits as problematic, David Eagleman sees them differently. A neuroscientist and self-described cyber-optimist, he shared some potent advice for educators at ISTE 2018.

His message: Kids today aren’t damaged by technology. Their brains are just different than yours.

“A digital native is used to this constantly changing world of sources and different information coming in,” says the bestselling author of The Brain: The Story of You. Because of this, “teaching can often be difficult for Gen Zers to concentrate on. So the onus is on educators to meet people halfway.”

The difference creates an intergenerational disconnect that can make teaching today’s kids difficult. Many educators—and adults in general—feel mounting concern about the current generation of students, who often have trouble focusing and who would rather Google an answer than memorize a fact.

It's no surprise, then, that ADHD diagnoses have skyrocketed in the past few years, and the Centers for Disease Control and Prevention estimates more than one in 10 U.S. children have the attention disorder. When you watch a teenager rapidly switch between texting, Snapchatting and Instagramming, it’s not hard to believe. But is this really ADHD?

“The answer, in most cases, is it’s not ADHD,” he says. “It’s the normal reaction of a Gen Zer reacting to the world.”

Here are a few more takeaways from Eagleman’s research:

Who we are is just as much about what we lose as what we gain.

“We drop into the world half-baked, and we absorb the world around us,” he says. “In the newborn baby, the connections are just barely communicating with one another.”

As children grow, they continue making new connections until, by age 2, they’ve forged hundreds of trillions of them. At that point, the brain begins pruning itself. It finds out which connections resonate with the world, and it discards everything else.

“Think about it like Michelangelo discovering the sculpture that lives in the middle of a block of stone,” he says. “He carves away everything else and just leaves the sculpture. That’s essentially what’s going on in your brain. You become who you are not because of what you gain and connect up, but because of what gets stripped away.”

Kids’ brains are different than ours — and that’s a good thing.

Today’s adults had a lot of "just-in-case" learning, Eagleman says.

“But now it’s different. Now kids are learning just-in-time knowledge. As soon as you want to know how to fix a bike tire, you just look it up.”

Educators may become frustrated when students say “just Google it,” but Eagleman believes just-in-time learning is actually advantageous because the learning happens within the context of the question being asked.

“The ancient Greeks figured out a long time ago that there were seven different levels of learning, and the most effective level of learning is when you’re curious about something and you care about the answer,” he says. “Then it sticks.”

Imagination has more lifelong value than most other human capacities.

The global economy has shifted from a manufacturing-based system to an information economy — and it’s still changing. As computers get better at digesting massive amounts of information, we’re going to see another shift, this time toward a creative economy, he says.

“In a creative economy, what matters is innovation, and that’s where humans shine.”

But contrary to popular myth, inspiration doesn’t strike out of nowhere. Creativity needs fodder, and everything a child learns and experiences becomes compost for innovative thinking, which occurs when the brain:

When students’ brains can bend, break and blend the world around them, they’re limited to the storehouse of information they’ve taken in.

“If you only have a small number of inputs, then you have a limited number of outputs,” he says. “Creativity isn’t just about digesting the world, but how much of the world you get to eat.”

Watch the video below to hear what Eagleman thinks of boring lectures.

Nicole Krueger is a freelance writer and journalist with a passion for finding out what makes learners tick.
Tags
ISTE Conference & Expo
professional learning