Pushing through failure: A Q&A with Andy Weir 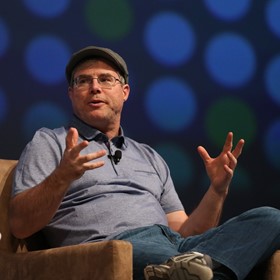 Bestselling author Andy Weir is no stranger to failure. He didn’t get his big break until he leveraged technology to share his story with an online audience. Gillian King-Cargile of STEM Read sat down with the programmer-turned-writer at ISTE 2018 to discuss problem solving, failure and lifelong learning. Below is a transcript of the interview, edited for length.

What kind of student were you?

I am a canonical nerd. I am exactly what you would have thought I was in high school—just a straight-A student getting beat up a lot. But I was also not a very good student in that I was really disruptive, because I was bored a lot. So I’d finish all my work and then I would just be disruptive in class, and the teachers would have to talk to my parents. So I wasn’t great on behavior, but I was good on paper. I got really good grades.

You kept yourself busy by writing fan fiction?

It’s true. The very first thing that I wrote was Beverly Clearly fan fiction when I was about 6 years old. Henry and Ribsy.

And you started working at a national lab at the age of 15, doing software development?

I did work at Sandia National Labs in Livermore, California. That’s my hometown. It sounds like, “Oh, you’re such a genius. You were working for a national lab when you were 15.” Not really. The lab had this thing where they would hire local teenagers from town to clean test tubes and stuff like that. So it wasn’t like I was some sort of mega-genius or anything.

The lab I ended up in, they said, “We don’t really know what to do with you, but we do need some data analyzed. Here’s a computer, here’s a book on how to program computers, and here’s a big file full of data that we want you to do a bunch of math on. Find out how to program computers, and tell us the answers to these questions.” And that began a 25-year career in software engineering for me.

Are there similarities between software development and writing?

There are and there aren’t. It was a real interesting transition to go from one career to the other. In software engineering, one thing I learned was problem solving—breaking things down into smaller, discrete problems that each have to be solved and then put together. People think software engineering is purely engineering, but there really is artistry to it. There are 50 different ways to solve the problem, but when you find a really elegant and pretty way that’s good, maintainable code that anybody in the future will be able to understand, there’s artistry there.

What I really miss the most about being a software engineer is being part of a team. Now I sit in my office at home, alone, writing. And I’m a pretty social guy. I mean, it’s not sad. It’s not like I’m in a dank basement with a flickering fluorescent light, just staring into the middle distance. But I do miss the social aspects of the software industry.

What did your path to publishing teach you about failure?

That there’s a lot of failure on the path to publishing.

I always wanted to be a writer, ever since I was a teenager. But I also really enjoy having regular meals. So when the time came to choose a career, I went for software engineering. I dropped out of college, because that’s what my generation did. I ran out of money, basically.

I was in tech for quite a while. Around 1999, I was working for America Online when they merged with Netscape. They said, “Oh, you’ve been laid off, and you need to exercise your AOL stock options within 60 days or they’ll fizzle.” So I’m like, all right I should find out what my AOL stocks were, and—oh my god. In the past three years I’d worked for AOL, the stock had gone up to monumental heights. By sheer force of luck, I got laid off right around the time it was at its all-time peak. So I ended up getting a bunch of money from that. And I’m like, I’m gonna be a full-time writer.

I spent three years writing a novel. That novel was not The Martian. You’ve never heard of it, because it sucked. It’s the same tale of woe that every author has. Couldn’t get an agent, couldn’t get a publisher interested. And after three years, I eventually went back into the tech industry. But that wasn’t a sad, hang-your-head, Charlie Brown music kind of thing. I liked tech, and I always enjoyed being part of it.

I started writing for fun, and that’s where The Martian came from. And then I kind of bungled and backed into success.

How has technology changed the way people write and share stories?

I had a mailing list of about 3,000 people, and I started to get emails saying, “I love The Martian, but I hate your website. Can you make an ebook version I can download?” Then other people were like, “I’m not very technically savvy, and I don’t know how to download a thing from the internet and put it on my e-reader. Can you just post it to Amazon?”

So I figured out how to post it to Amazon. They make you charge at least 99 cents a copy. And people paid the dollar, just because it’s convenient. And it really snowballed. It started to sell very well. By the way, I was pulling down a cool 35 cents a copy in royalties. Bought a few cups of coffee with that.

It started to get really good reviews, and it worked it work its way up the top ebook sellers. That got the attention of an agent. After three years of failing to get an agent, now one is contacting me. And then Random House contacted me, and I’m like, “Talk to my agent.” And then while those negotiations were going on, 20th Century Fox said, “We want to buy the film option for The Martian.”

Meanwhile, I’m still working at my software engineering job. So I’m there at my cubicle fixing bugs, then running off to a conference room to take a call about my movie deal, then back to fixing bugs. It was a surreal time. And the two deals came together four days apart. I had to take a day off to lie down. It was just so unbelievable. I honestly wondered if it was a scam. But then once the advance check came from Random House, I’m like, well, if it’s a scam, they’re not very good at it.

What keeps driving you to learn?

I guess I just really enjoy the process of learning new things. I love doing research. When I’m writing my stories, I try to be as scientifically accurate as possible. And that’s the really fun part for me is researching and the problem solving.

Why is problem solving a theme in your books?

I just really enjoy that kind of story. You should write a book that you yourself would like to read, and I like books that have problem solving. What I love the most is when I as the reader am not able to figure out how to solve the problem, and then when the characters solve the problem, I’m like, “Yes. That made sense.”