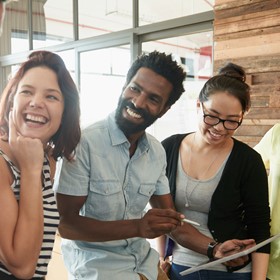 Every movement begins with an idea, and many ideas are sparked by chance. Like when a couple of people interact with each other on Twitter or a group decides to keep in touch after meeting at a professional event.

That’s what happened with the wildly popular edchats and edcamps. A few people began sharing ideas with each other and decided to expand the audience. Today, both edchats and edcamps are held globally and participants aren’t hesitating to tweak them to fit their own needs (and time zones).

It all started when three educators — Shelly Sanchez Terrell, Tom Whitby and Steven Anderson — connected on Twitter, and hit it off. Whitby admits he liked to stir things up by asking provocative questions. All three had good-sized followings on Twitter, and because of the way Twitter works, any of those followers could get involved in the discussions. Eventually, Whitby suggested that the three set up a specific time and date for one of these education-related discussions. Sanchez Terrell came up with the hashtag #edchat, and on Tuesday, July 30, 2009, they held their first formal discussion.

It was an instant hit. Edchats occurred every Tuesday evening (Eastern time) and it wasn’t long before they added a chat seven hours earlier (noon Eastern time) to accommodate other schedules and time zones.

You can’t please everyone with those times, Whitby says, but it made edchats more accessible to educators in Europe, Asia and Australia. The Tuesday chats keep with one topic each, based on a weekly poll of potential topics.

Since edchat started in 2009 hundreds of new education-related Twitter chats have taken off.

Watch the video below to learn more about edchat and then read on to find out how edcamps got their start.

It was one of those “we should …” kinds of conversations and it took place after a group of educators attended a BarCamp, an ad-hoc unconference centered on tech topics. As Kristen Swanson writes in an EdTekHub article, “After experiencing the passion, sharing and excitement that surrounded the event, a handful of other educators and I decided it was too good to contain. We exchanged contact information and, on Skype calls over a period of months, tweaked the design and adjusted the BarCamp concept to accommodate teachers and administrators.”

This new concept was called edcamp and ground rules were that the event had to be free, participant-driven and not influenced by vendors. After the first edcamp in 2010, attendees excitedly shared their enthusiasm about the experiences on social media and other outlets. Soon, edcamps were formed across the U.S. and eventually worldwide.

Changing the face of professional learning

Initiatives like edchat and edcamp are successful, in part, because they are free and accessible to most educators. Whitby thinks one of the secrets to their success is that they add transparency to what’s going on in education.

“For most educators, education is isolated,” he said. “Educators do things inside their classrooms, but they don’t really know what other educators are doing.”

Forums like edchat and edcamp allow educators to learn from each other. It validates what educators are doing, while opening up new concepts and ideas.