App smashing amps up the power of apps 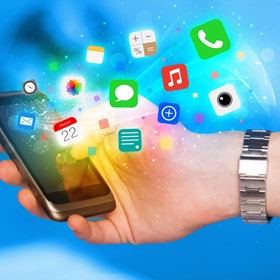 First graders can do it. And you’re probably already doing it without realizing it – app smashing, that is.

App smashing is using two or more apps that enhance the apps’ features in new, creative and often unexpected ways. This opens up a whole new approach to learning.

“There is no one app out there that can do everything,” says Kathy Parker-Jones, educational technologist for Hilliard City Schools in Columbus, Ohio, who, with Lauren Davis, technology integration specialist for Hilliard City Schools, who presented the workshop App Smashing: Use Multiple Apps for Creating Innovative Projects at ISTE 2015. “With app smashing, you are harnessing the power of individual apps and making them even more powerful.”

Smashing may be a bit of a misnomer, since it presents an image that multiple apps are somehow joined together, like overlaying one icon on top of another to make a super app. Instead, it’s more like a building process. Users create a project in the first app, save it, and then open that saved image or movie in the second app to add new features that aren’t offered in the first app.

For instance, in an app like Wordle, students can create word clouds using the week’s vocabulary and spelling lessons. Once the word cloud is saved, it can then be accessed by an app like ThingLink, which allows you to make images interactive. Students can then link the words in their cloud to pictures, websites, articles or videos. They can go a further step by taking the file they saved in ThingLink and use it in a slide show app like 30Hands.

What makes app smashing perfect as a teaching tool, Davis points out, is that it eliminates the need for a different app for each subject or project. Instead, teachers can collect a core set of apps that cover multiple topic areas and smash those with more specialized apps when necessary.

How easy is it to start app smashing? It is simple enough that first graders can do it, literally, as Parker-Jones and Davis say they work with 6-year-olds who are creating an image in one app and moving it into other apps. It’s a matter of experimenting with the apps you’re already using and adding in the apps with features you’d like to include.

Almost everyone has a favorite camera app – even if it is just the camera on your phone – and from there you can access the picture file into another app to create a unique project.

Colette Cassinelli, teacher librarian at La Salle Catholic College Preparatory in Milwaukie, Oregon, who presented the BYOD session Unleash the Power of Your iPad with App Smashing, adds that is really is just a matter of experimenting and playing with your favorite educational apps to see what you can create. Also, trust your students. They tend to be app-savvy and may be able to show you app-smashing opportunities that would not have presented themselves otherwise.

There are many advantages to app smashing in the classroom. Students get to exercise their creativity with a project that otherwise might be mundane, and teachers get to see unique presentations that highlight each student’s individual strength.