Use these resources to bring augmented reality to your classroom 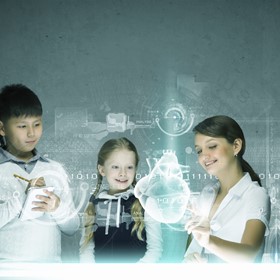 The use of augmented reality in classrooms is growing, as more educators discover this affordable option for bringing a new dimension to the printed page — and to physical objects — in a way that can engage and motivate learners. Unlike virtual reality (VR), where users look through viewers to experience 3D, 360-degree videos and still images, augmented reality, or AR, comes in several forms.

AR can involve overlaying computer-generated images onto live video. It can also be activated by viewing a trigger image with a mobile device loaded with an AR app. A third method involves headsets. Users view their environment while 3D holograms appear to enhance, inform and entertain. One promising AR device, Microsoft’s Hololens, is currently shipping to developers.

Perhaps the best example of this type of AR comes from the world of sports. Sportvision embeds country flags that appear to be under the ice in speed skating events. Football fans see the first-down markings or the line of scrimmage as if they were painted on the field right under the players’ feet. And during the Olympic Games in Rio, TV viewers will see real-time visuals superimposed on footage of swimming, diving, running and sailing events. You can use these exciting athletic events with their AR enhancements to develop classroom activities. Scholastic, ReadWriteThink and Teachervision have suggestions for using the Olympics as a catalyst for learning.

This is probably the most common use of AR in the classroom today. A flat surface comes alive with 3D animation and sound. The moving images can be on a page of a book, a preprinted 3D surface (such as a cube) or a document downloaded from a webpage and printed out. What makes AR different from QR codes, or other links to videos, is that the AR content is superimposed onto your own real-time environment.

Carlton Books has published a series of titles enhanced with augmented reality images. The apps are free and the hard cover books retail for $12.95 or less. They include iSolar System, iScience, iDinosaur, iStorm, The World of Thomas and King of the Railway. Interactive Animal Books’ Animal Kingdom is another example of a book-based augmented reality source that would be ideal for the classroom.

Quiver is a delightful enhancement to the traditional coloring book. Simply download images from the website and have students color the drawings with regular colored pencils. With “magical” augmented reality and the free Quiver app, the drawings come to life, with airplanes flying, dolphins swimming and dragons breathing fire. The Quiver Education app is $7.99, with discounts for schools. It has science and math lessons that show animations, such as the stages of a volcano erupting, the parts of a cell and lively dodecahedrons.

With Elements 4D, produced by Daqri, you can experiment with chemicals in a safe, but interactive way. Six sides of six cubes have target images that can be combined using the AR app with surprisingly realistic effects. Anatomy 4D, also produced by Daqri, is one of many examples of simple-to-use, free AR apps. You merely point your mobile device at the target image to generate the sound and animation. You will hear the human heart beat, watch the blood flow and isolate the various parts. It is for students who are at least 17 years old.

Lunch Rush produced by PBSKids, under a cooperative agreement with the U.S. Department of Education, is a game requiring the Fetch! Lunch Rush app, printed game pieces and room to move. It combines physical movement, math skills and problem solving, all of which require augmented reality to achieve a goal.

The mission of the producers of Aug That! is to enrich and enhance schools, students and teachers. Their efforts are supported by research showing that using augmented reality in the classroom can raise test scores as well as address visual, auditory and kinesthetic learning styles.

Teachers and students can create their own AR experiences triggered by a still image on the class webpage, black-and-white photocopied handout or a letter home to parents. Read Larysa Nadolny’s post Worksheets for the digital age: AR interactive print to find a list of apps for creating your own AR experiences, including Layar, Augment and Aurasma. Luis Perez and Kendra Grant’s post 4 AR tools to build executive function and engagement describes how teachers can use BlippAR’s tool BlippBuilder to create AR posters with hot spots that, when scanned, respond with an animated image.

The phenomena of 2D surfaces coming to life is fascinating and engaging. When you address ISTE Standards for Students, including Research and Information Fluency and Creativity and Innovation, you can track and document learning outcomes. When such a powerful technology is combined with well planned, intriguing lessons, the results will be positive and measurable. And, as the name implies, reality will be augmented, and your students, as you will observe, will be entranced and enthralled.

Want to learn more about some of the hottest ed tech tools on the horizon? Maureen will be presenting 10 Promising Technologies and Trends to Inspire Creativity and Enhance Your Teaching at ISTE 2016. Find more sessions related to trending tech, one of the hottest topics at ISTE 2016.