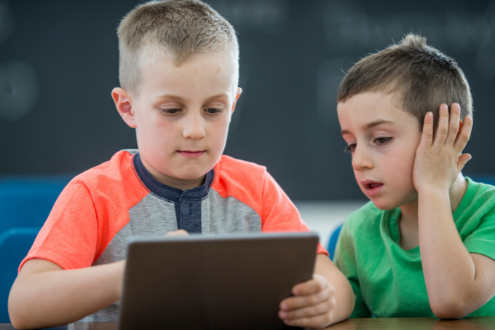 “I was bouncing all around the room and it was getting overwhelming trying to keep up with that,” he said. “I needed to find a way to multiply myself.”

In a sense, he was able to do just that using video. “When I couldn't get there right away to help a student, I could say, ‘Hey, why don't you watch this video really quick and if you still have questions, I’ll help you.’”

That was the start of what has grown into a big part of Stock’s teaching toolbox. He has steadily expanded his use of video in his sixth grade English language arts classroom at Santa Fe Trail Middle School in Olathe, Kansas. He uses videos to guide his students through lessons, answer frequently asked questions, deliver daily classroom announcements and communicate with parents.

His success with video has also led him to teach other educators how to use it. Those efforts spurred him to write a book on the subject, Awesome Sauce: Create Videos to Inspire Students, Engage Parents and Save You Time.

Everything Stock does with video relies on technology, from his iPhone to create them to a digital classroom platform to share them to the devices his students use to watch them. But the underlying goal is at the heart of teaching: spending quality time with students.

“My goal is to have as much one-on-one time with students as possible,” he said. “I think the best teaching comes from those moments when you can sit down one-on-one and actually process through things with a student.”

One of Stock’s first uses of video was to deliver daily classroom announcements. He teaches five periods of sixth-grade English language arts, so those announcements were repetitive.

“I started recording those and I realized that it freed me up to check in with kids. I thought, ‘OK, this helps me in this spot. Where else could I add a video that will help free me up to work one-on-one with individual students?’”

Over the years, he has looked for opportunities to use video and has built a library of videos that he uses from year to year.

Stock is comfortable in front of the camera. He’s been making videos since he was in middle school and he’s now in his 12th year of teaching. But he says any teacher can incorporate videos.

“I think that the style of video depends on your personality. I can record a video with no script, just because that's my personality. Other people want to write down a script. And they want to practice it a few times. It’s just what you're comfortable with as far as your preparedness level.”

For those who aren’t comfortable on camera, screencasting is an option. That involves recording your voice over images on your screen.

“There are ways for each personality type to create video,” Stock said. “It’s just finding what works best for you. ”

For those interested in creating videos, Stock offers these four tips:

The biggest stumbling block for teachers in trying video, Stock says, is the feeling that they have to be perfect, with smooth transitions, cool music and no “ums” or “uhs”. “My thought is, the video is never perfect,” he said. “It doesn't matter how perfect I think it is, the kids will pick out things that are wrong about it. I think if teachers just pull out their phones and try it, they’ll find ways it can help in their classrooms.” Stock has a three-take rule: If he doesn’t get it exactly right by the third take, he goes with what he has. Also, Stock advises to keep editing to a minimum.

A good place to start is with daily announcements because they are straight-forward and low stakes. Next, record repeated content – those lessons that you deliver over and over with little deviation. For example, Stock will make a video about a common grammar error he sees in assignments and post a QR code in the classroom that the students can scan to get access. Another easy starting point is to just read an assigned book aloud. Stock finds that helps struggling readers with fluency and forces strong readers to slow down and focus on comprehension.

In addition to the weekly text newsletter he sends to parents, Stock occasionally includes a video that summarizes what’s going on in class. He also makes videos to introduce himself to his new students before school starts in the fall. In both cases, Stock’s appearance on the screen creates a personal connection that’s impossible to convey in a text newsletter.

“I have a lot of parents who come in for parent-teacher conferences and they feel like they know me because they've seen me talk a few times. Making that first connection is a huge help.”

“I've got two kids, and they spend a lot of their time watching YouTube,” Stock said. “I started watching what they're watching. It's interesting because it gives me an idea of how to frame my videos. They're usually pretty rapid fire and there's usually a lot of transitions between videos. I don't incorporate all of that, but it gives me an idea of what the kids are used to watching.”

Jerry Fingal is an ISTE blogger from Eugene, Oregon. This is an updated version of a post that originally published Feb. 20, 2020.

“I was bouncing all around the room and it was getting overwhelming trying to keep up with that,” he said. “I needed to find a way to multiply myself.”…

I wrote so many boring book reports as a kid that it nearly turned me off to reading altogether. That is, until my sixth…

By now you’ve probably heard of personalized learning, which tailors instruction, expression of learning and…