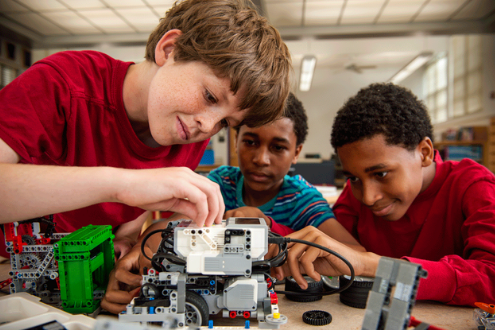 “Kids are saying they want to learn more about technology and science, but they also want to experience it creatively and use it personally,” said Dale Dougherty, founder of Make Media, which produces Maker Faire and Make Magazine.

But what makes a makerspace? Dougherty and other maker movement advocates have identified three common elements of successful makerspaces:

Makerspaces can be elaborate learning spaces equipped with sophisticated tools and supplies, but they don’t have to be. Dougherty offered the following simple tips for creating one in your school.

It doesn’t need to be fancy. It doesn’t even need to be large. At the Ellis School in Pittsburgh, girls tinker at “Innovation Stations” that are tucked into hallways and the corners of classrooms, said technology director Lisa Abel-Palmieri.

Sometimes finding space is simply a matter of reprioritizing. For example, Shannon McClintock Miller, the teacher librarian at Van Meter Community School in Iowa, had an office in the corner of her library. She decided to convert it into a makerspace for students.

“You can create a space for kids that becomes richer and richer over time.”

Lissa Blake, a K-2 instructional technology integration coach in Clarendon Hills, Illinois, got creative with some unlikely materials. She used pizza boxes and a fistful of green straws from Starbucks to create a low-cost recording studio where her 6-year-old students could make their own videos.

Watch her ISTE19 TED Talk to learn how she did it:

There are more than 30 sessions focused on making and makerspaces at ISTELive 22. Explore the sessions and then sign up to join us in New Orleans.

This is an updated version of a post that originally published on June 21, 2014.