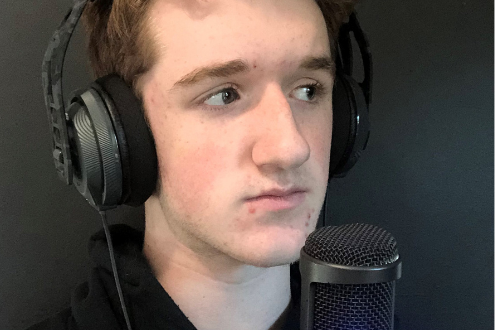 Much of education during the coronavirus pandemic has involved screens and technology to keep both teachers and students safe. But one Oregon high school took a different approach.

Looking to the days before television for inspiration, the South Eugene High School Theatre Department put on a performance reminiscent of the golden age of radio.

Radio Noir was the brainchild of theatre director, John Monteverde who worried that remote learning would eliminate opportunities for authentic performance. So he called on his team of student performers to be extra creative.

“Given the safety restrictions, we had to look for what we could do instead of what we couldn’t,” Monteverde said. “We have voices. We have laptops and microphones.”

Radio Noir consisted of two plays, the 1943 play Sorry, Wrong Number by Lucille Fletcher and The 39 Steps, a play written in 2020 that was inspired by Alfred Hitchcock. The plays were recorded by the high school actors in the safety of their own homes. Each performer recorded their own track, some recorded in closets or hung blankets and sheets to act as a sound dampers.

Students then edited the tracks together using BandLab and Soundtrap.

Developing a new style of acting

In addition to learning the technology, the students had to learn to act alone, without fellow actors or an audience. Senior Oshen Parris-Austin, the lead in The 39 Steps, had some radio experience before with a local community production. Still, it took some getting used to.

“South theatre puts a lot of emphasis on listening while acting, being really tuned into other people in the scene to take cues. That doesn’t really exist on Zoom,” Parris-Austin said. “You had to put more energy into your voice. Also, usually we’d hear applause. Now we just got an email the next day that someone liked it.”

The show was taped, then made available for streaming on the department’s website, with an optional donation. The distribution of the show had another surprise advantage: Family members from across the country were able to “attend.” The troop even received a thank you note from resident from a local retirement home who enjoyed the performance.

“It’s cool to hear that our online productions have reached a wider audience than they could have reached otherwise. Family who couldn’t have come to a live show was able to listen to a live recording,” says senior Amanda Hopper-Moore, who played Annabella Smith in The 39 Steps. “I’m just thankful for a little normalcy in such a stressful time to do something I love with the people in my community.”

Students across the country adapt to remote learning

Many classes adapted to the unique circumstances of the pandemic with projects that blend the virtual world and the real community. For example, Sara Lev’s kindergarten students at Los Angeles’ Larchmont Charter School designed a classroom website with individual student pages, neighborhood maps, favorite recipes and birthdays.

Second and fourth graders at Sherman Elementary School in Tacoma, Washington, learned about geometry through scavenger hunts inside their homes and in nature. The school's  fifth graders have taken up passion projects, including a clothing drive for homeless members of the community and researching and building mountain bikes.

“Our teachers felt there was so much potential for voice in this cycle,” says Sherman’s instructional coach Zoe Zachmeier.

As for the South Eugene drama team, they are brainstorming ideas for the coming season when seniors traditionally direct their own shows. One such show is a compilation of interconnected solo monologues. Another is a radio production of Little Women.

“Drama kids all across America had their spring season shut down last year. We went into fall not sure they were going to be able to perform this year or what it would look like,” Monteverde said. “Then when we did it and it was fun, fulfilling and different. It didn’t feel like a consolation prize. Some students are talking about keeping the annual radio show going.”

Jennifer Snelling is a freelance writer based in Eugene, Oregon, who writes about how technology enhances learning.

Much of education during the coronavirus pandemic has involved screens and technology to keep both teachers and students safe. But one Oregon high school took a different approach.

Looking to the days before television for inspiration, the South Eugene High School Theatre Department…