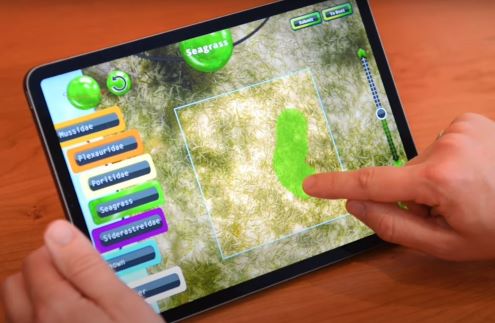 The project, dubbed NeMO-Net, turns preserving the world’s coral reefs into a gamified experience where players board a virtual research vessel and go on underwater expeditions to identify types of coral using real data from NASA.

The goal is to use the information from players to train NASA’s Pleiades supercomputer to identify types of coral – and whether they’re dead or alive — to create a global portrait of the state of coral reefs. The reefs are one of Earth’s richest ecosystems, but they’re dying off due to climate change, pollution and disease.

“We would love to help work with teachers on deploying the game as an educational tool with real-world impacts and benefits to marine conservation,” Chirayath said. “My team has worked with elementary schools before for beta testing with great success.”

The NeMO-Net game was born as a way to analyze data provided by a NASA innovation – fluid lensing cameras, aka FluidCams. Developed by Chirayath, the FluidCams eliminate distortion caused by the movement of water to provide a clear image of the ocean floor. The cameras can map the seafloor at the centimeter scale in water up to about 100 feet under ideal conditions.

NASA deployed the cameras attached to drones and other aircraft to about a dozen areas around the world rich in coral reefs, such as American Samoa, Guam and Puerto Rico. Mapping of the coral reefs by hand would be an impossibly time-consuming task – NASA estimates it would take 2 million years. Crowdsourcing it by turning into a game makes it possible.

“The game uses data from FluidCam for the finest scales only to train satellite data from commercial satellites and NASA satellites,”

hirayath said. “Using this method, FluidCam only needs to survey a small subset of diversity hotspots to gain enough training data to train lower resolution satellite data, which also appear in the game as users rank up.”

The more people who play, the better the supercomputer becomes at identifying coral.

“We only need about 0.1% of our data to be classified, then we can use the NASA supercomputer to train the NeMO-Net neural network to classify the rest automatically with high accuracy,” Chirayath said. “We estimate our first global products will be ready by the end of 2020.”

A player’s home base is aboard a research vessel called the Nautilus. Players dive into the water where they are met with a 3D image of the ocean floor and a short explanation of what they are seeing. Players use their fingers to navigate and to “paint” the image according to type of seascape. That might be coral, algae or bare seafloor. Once the image is painted, it is submitted to NASA. Players earn badges and level up according to accuracy and volume.

Systems built into the game ensure accuracy. The initial training module requires users to classify coral with 90% accuracy before proceeding to the next level, Chirayath said. A player’s accuracy is further measured by having them identify areas already known to NASA.

“Once a sustained high accuracy is achieved, we provide never-trained data sets,” Chirayath said. “These results can then be up or down voted by other users for active learning.”

Chirayath was inspired to undertake the coral mapping project after learning about how little of the ocean floor is mapped, about 5%. “We know more about the surface of Mars and the moon combined than we do of our own ocean floor,” Chirayath said.

Ultimately the maps can be used to guide efforts to preserve the coral reefs.

Chirayath hopes his camera will be used to explore other worlds. He foresees the day when it can be used on rovers on Mars or imaging satellites passing by Pluto.

“One of the impacts that I hope my work has is that it’s able to translate into looking at other worlds, so we’re able to study other worlds through the lens of understanding our own planet.”

NeMO-Net is available on the Apple App store and is playable on iPads, iPhones and Mac computers. A version for Android systems is in the works.

Jerry Fingal is a freelance writer, based in Eugene, Oregon, who focuses on education.