Sketchnoting brings power of brain science to the classroom 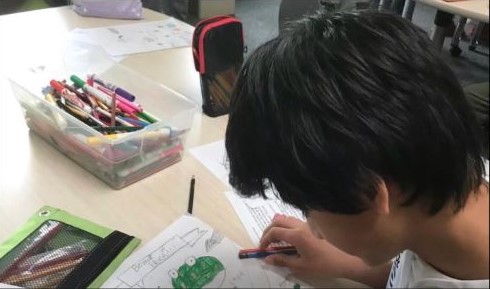 In 2016 Nichole Carter attended a session on sketchnoting at the ISTE conference, and it changed her teaching forever. That pivotal moment also sparked a passion that’s led her to become a sketchnoting evangelist of sorts.

Carter, an innovation strategist for the Beaverton School District outside Portland, Oregon, was so taken with the note-taking method that combines words and pictures that she immediately found her boss at the conference.

“I said, ‘Listen, I get this,’” she said. “I said I’m going to take a deep dive into this and bring it back to the district.”

Carter did just that and more. She has since trained hundreds of Beaverton teachers and students, and done demonstrations in more than 300 classrooms from second grade through high school. She also wrote a book about the method that was released in 2019, Sketchnoting in the Classroom: A Practical Guide to Deepen Student Learning.

As an innovation strategist, Carter provides training to the Beaverton district’s 2,600 educators on integrating technology into the classroom. Her position gave her a forum to spread the word about sketchnoting.

Sketchnoting’s effects on retention of information were immediately clear to Carter. As a student, she had always taken copious notes but didn’t perform well on tests. She would try anything, like when a teacher told her he would paste his notes onto cards as he listened to classical music. It didn’t work.

“I always would come back with mediocre results regardless of how hard I studied,” she said. “As I started to train my brain to sketchnote, I realized really quickly that I was getting 100 percent retention. Everything that I would sketchnote and draw, I would remember.”

Sketchnoting is research based

Sketchnoting is based on the idea of dual coding: The brain retains information better if it is taken in both visually and verbally. Carter says it’s less passive than traditional note-taking and requires students to synthesize information.

“It's not about taking verbatim notes, which students really struggle with,” she said. “They constantly are trying to find that balance between what is important and what isn't. With the extra components of sketchnoting, you have to think about the doodles as well as the information and the organization of what you're doing. It forces you to synthesize the content.”

“I think people are starved for outlets of creativity,” she said. “This incorporates color and doodling and really thinking a little bit more abstractly about how you're taking notes. There's an element of fun to it that I think transcends basic note-taking, which is, quite frankly, sometimes very passive and leads to non-retention.”

Sketchnotes also are more engaging when they’re revisited, she said.

“You would much rather go back and look at something that's fun and colorful and engaging,” she said. “I think we've become a culture that’s hungry for great information design. So, when we see stuff that does not appeal aesthetically, we tend to tune it out.”

Sketchnoting and the teaching of languages

Carter at first thought sketchnoting would be a good fit for the district’s AVID program, which teaches students organization and studying skills. But when she was first shopping the method around to the district’s different departments, it was the multilingual department that showed the most interest.

“They had been doing a lot of research about language acquisition and why it’s so good for the brain,” she said. “Sketchnoting was exactly what they were looking for it. They knew the research behind it, they just needed the actual nitty-gritty, how-to for teachers in the classroom. So, we quickly turned that around.”

Within six months of the ISTE conference, Carter provided training to the department’s 220-member English language development staff.
She also created a self-paced online course on sketchnoting for the district’s teachers, which more than 100 have taken.

Sketchnoting does not require any artistic ability, Carter said, adding that she has no artistic background. She characterizes learning the practice as a marathon, not a sprint, and that our visual vocabularies improve with practice.

“I’m a tech integration specialist, so I can draw a laptop like you wouldn’t believe,” she said. “But animals freak me out. I have a lot harder time with them.”

Sketchnoting can be analog or digital

Sketchnoting can be done with paper and pen or with a digital device and a stylus. That’s a matter of personal preference, she said.

Watch the recording of the ISTE Expert Webinar, “No Mistakes, Just Happy Sketchnotes: Let’s Bob Ross Our Learning.” The title references Bob Ross, the pop culture icon who taught painting on television via a series on PBS and who is known for saying, “We don't make mistakes; we just have happy accidents.”

Carter will emulate Ross’ teaching style in the webinar by asking participants to create a sketchnote along with her.

“We will be making a sketchnote step-by-step that will also cover the whys and the hows of it,” she said. “When we’re done, you will have your very first sketchnote.”

Sketchnoting brings power of brain science to the classroom

In 2016 Nichole Carter attended a session on sketchnoting at the ISTE conference, and it changed her teaching forever. That pivotal moment also sparked a passion that’s led her to become a sketchnoting evangelist of sorts.

So it distressed her when two bright students in her high school literature class in Plato, Missouri, copped bad attitudes about having to study The Hobbit.

“They were very willing to share their negative comments with me,”…