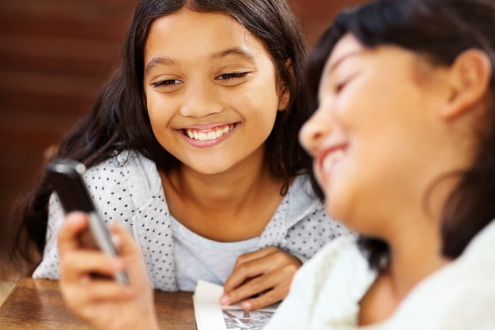 But what Needles has discovered over 20 years of teaching is that video poems are a great edtech teaching tool. The process of creating and merging video and words stokes students’ creative fires while building literacy skills. They’re also versatile and can be used in all manner of classes, from social studies to science, and from elementary school to college.

“I always love when you're able to learn to use technology in a creative way and at the same time you’re learning how to write and maybe some other subject matter,” he said. “It’s a fun project to do. That’s probably why I’ve been doing it so long. It’s not just a great learning experience but kids really enjoy it.”

Making video poems involves putting together words and images into one digital composition. They can take many forms and there are many ways to go about it. Needles usually has his students write poetry and combine it with images or video they have taken. But they can be done with other people’s poetry and copyright-free images.

“It’s a nice way to incorporate creative visual literacy into pretty much any class. Obviously, it fits really well with an English class. Social studies classes really like it because they don’t always have the chance to work in something creative like this.

“Even in science, if you’re studying something like photosynthesis, by having students make art about it, you get a better sense of what they understand.”

The process of creating the poems requires students to really understand the subject matter, Needles said.

“There’s a nice layered element of learning that’s happening regardless of what the topic is,” he said. “That’s the strength of a project like this.”

Start small and build from there

Needles suggests teachers start with simple poetry, like a haiku, and use whatever technology is available. As for images, nature is always good for visuals.

“That’s an easy way to start, and it’ll take one or two class periods,” he said. “With a smartphone, you can turn it into a visual poem pretty easily.”

Needles suggests starting with a four-frame-photograph poem and then build up to video and live action. The most complex ones are done with animation, which is hard to do in a classroom because it’s time consuming. But visual poems are usually short, so animation is still doable.

For some of Needle’s students, visual poetry is just the start. They progress to podcasting and storytelling, then work in video and ultimately create their own short films.

“It’s a nice progression because it’s all driven by content and not technology,” he said.

And it's a great way to address the Creative Communicator standard within the ISTE Standard for Students. Standard 6b expects students to "create original works or responsibly repurpose or remix digital resources into new creations."

Poetry is infinitely adaptable and allows students to go in directions that interest them.

“The nature of poetry is that it has so many different forms and can play so many roles for people,” he said. “I’ve been doing it for 20 years and it’s always successful regardless of what the technology is.”

Jerry Fingal is a freelance writer based in Eugene, Ore., who specializes in topics related to education, technology and business.

This is an updated version of a post that originally published on Jan. 16, 2020.

5 Ways To Get Creative on International Dot Day

One of our favorite celebrations at school every year is International Dot Day!

This amazing global celebration of creativity, courage and collaboration is based on Peter H. Reynolds' book The Dot, which is the…