Teaching Computational Thinking Is More Important Than Defining It 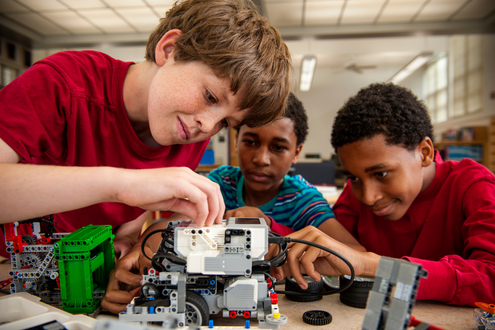 Computational thinking (CT) is riding a strong current in the edtech world that teaching K-12 students to think like computer scientists will better prepare them for work and life.

But bringing CT to K-12 classrooms isn’t something educators can do overnight. It faces obstacles like introducing it into the curriculum to getting teachers fully onboard. It’s a challenge that could stand to undergo some computational thinking itself.

The first step in that process would be breaking down the problem into smaller, more manageable ones.

For computer science educator and author Kiki Prottsman, one of those smaller problems is that many teachers don’t yet really know what computational thinking is. And that problem is rooted in its exact definition.

“I think that’s where a lot of teachers get hung up,” she said. “And since it’s at the very beginning it’s a big deal.”

But even “trying to look it up on the internet it’s kind of a mess. Different people consider it to be different things,” she said.

The classic definition of computational thinking was devised in 2006 by computer scientist Jeanette Wing in an effort to spread computer-science problem-solving to other disciplines. It consists of four pillars: decomposition, pattern recognition, abstraction and algorithms.

In 2012, ISTE and the Computer Science Teachers Association led an effort to develop an operational definition of computational thinking to help K-12 teachers introduce it in their classrooms. It translates Wing’s framework into a set of six steps that were aimed at resonating with K-12 teachers.

“Those are the two ways those terms are used and they’re both super valid,” Prottsman said. “It’s just that if I’m a teacher and I’m exploring it for the first time, I might think I’m starting to get it and then somebody slips in that other description and I’m completely lost again.”

Most teachers have been doing CT already

Once educators set out to teach computational thinking, they’ll likely realize they’ve been teaching it all along, Prottsman said. It's often hidden in other lessons.

Just using the vocabulary of computational thinking in the classroom will help both teachers and students. For example, Prottsman said, if a math class is working on a difficult word problem, the teacher could suggest they “decompose it.”

“Let’s take it apart and find all the elements we’re working with here,” Prottsman said. “If the teachers can use that terminology, then, first off, they will be highlighting for themselves all the places they’re already doing this every day.

Secondly, students will start to know those terms as problem-solving tools and then they’ll recognize they have those in their "backpack" when they want to solve something that seems unfamiliar.”

The payoffs for integrating computational thinking into education are huge, Prottsman said.

“The ability to solve a problem that no one taught you to solve is very empowering. Once you believe you can overcome hurdles, and you as a student believe that ‘a teacher didn’t teach me this but I might be able to figure it out anyway,’ you take ownership of your own education. And you become someone then who’s really unstoppable in education and in life. So, the earlier we can get kids to believe that, the better it is for everybody.”

Jerry Fingal is a ISTE blogger who writes about the many ways technology enhances teaching and learning.

When I set out to integrate computational thinking (CT) into a Spanish-language lesson, I kept asking myself, “How on earth am I going to pull this off?”

As a former Spanish language teacher, I wanted to challenge myself to combine what I know with what I was learning: language…