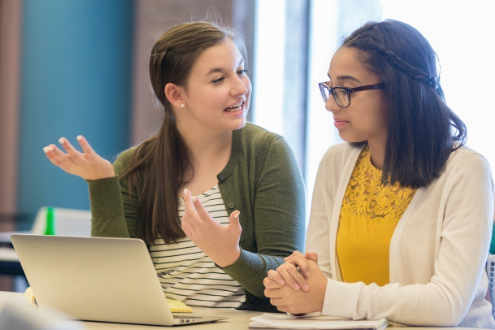 Can digital digital citizenship be taught in a positive way? Sarah Loyola from North Carolina's Ravenscroft School says it can.

When Loyola came to Ravenscroft as its first director of educational technology, the independent PK-12 school in Raleigh was entering the second year of a three-year contract with the Social Institute to provide its digital citizenship curriculum.

The Social Institute, or TSI, describes its mission as empowering students, parents and leaders to navigate social media and technology positively. It emphasizes teaching students what to do, rather than what not to do — and it creates age-appropriate, real-life social scenarios to get students thinking and talking about what they would do in those situations.

Before adopting TSI’s curriculum, Ravenscroft lacked a systematic way of teaching digital citizenship, Loyola says. “It was more that there was a policy, and students were made aware of the policy at the beginning of the school year,” Loyola says. “But that was it.”

Now, starting in sixth grade, students get a digital citizenship lesson each fall, winter and spring from the teacher who is their assigned adviser. Each 30- to 40-minute lesson focuses on one of TSI’s seven social standards, which complement but differ from ISTE’s Digital Citizen standard within the ISTE Standards. The Social Institute’s standards are:

1. Play to your core

Only share things you won’t mind seeing made public. Share the things you love most, not what will garner likes and comments. In short, be the best version of yourself. Loyola sees “play to your core” as dovetailing with ISTE’s Standard 1.2.a., which says, “Students cultivate and manage their digital identity and reputation and are aware of the permanence of their actions in the digital world.”

Surround yourself with positive role models who support you and encourage you to play to your core. Avoid anonymous sites, unfollow anyone who makes you doubt yourself and block those who send you inappropriate or rude content. This TSI standard overlaps ISTE’s Standard 1.2.b., which states in part, “Students engage in positive, safe, legal and ethical behavior when using technology, including social interactions online.” Loyola says the standard applies equally to life offline: It’s about choosing role models who are “focused on pumping people up and not bringing people down.”

When you see people being bullied, give them support and encouragement. TSI advises students who witness cyberbullying to stop, block whoever sent it, screenshot the offense and talk to an adult about what to do next. “That's one that we really focus on quite a bit in middle school,” Loyola says. Again, this standard is just as relevant to life offline.

This standard — which advises students to avoid sharing their location, email address, and phone number, and to change their passwords every three months — aligns with ISTE Standard 1.2.d., which states, “Students manage their personal data to maintain digital privacy and security and are aware of data-collection technology used to track their navigation online.” With TSI, Loyola says, “We actually take them through the settings and say these are the ways you can do this or that.”

6. Use your mic for good

Social media can be a powerful tool for good. “This is more of a focus of activism,” Loyola says. “We show them case studies of young people who have used social media to start a campaign of some sort to help those who are underrepresented, for a charity or whatever it may be.”

Talk regularly with your friends, parents and teachers about your experiences online and how to live up to high standards. Also, coach younger students on how to use social media responsibly, and help adults understand the role social media plays in your life.

Each term, Loyola prepares teachers for the curriculum with a 30-minute “boot camp,” where she identifies the standard to be taught and runs through the lesson and a few of the scenarios. Then, she and the other teachers each lead their own group of students through the lesson.

But, she emphasizes, it’s not a lesson in the traditional sense.

“It’s not a lecture,” the ISTE Outstanding Teacher Award winner says. “We go through the seven social standards. We tell them which one we're going to focus on for the day.”

Then they take students through scenarios.

In “social sprints,” middle school students are presented with a situation, such as “You notice some of your friends “like” a racially offensive post that another classmate shared on Instagram, and students at your school feel offended. What you do?” The students pair off to quickly discuss what they would do. Then they report back to the group and participate in a broader discussion of potential responses.

They usually get through about five scenarios, spending about five minutes on each. During that time, the goal is for students to do the talking — and to respond honestly.

After students have shared their responses, the teacher shows TSI’s list of suggested responses and may ask follow-up questions.

Later in the term, students participate in a group follow-up activity with their teacher-adviser. Follow-up activities are meant to personalize the lesson so students can internalize the standard. One activity called “Flip Your Flop” asks students to consider a social mistake they made and then think about what they could do to right the situation or become better as a result of it — thus, flipping the flop into something positive.

“They just eat it up, especially our sixth and seventh graders,” she says. “They're getting phones for the first time, and they want all the information we can give them.”

So, Ravenscroft took that feedback to TSI, which came up with another idea for high-schoolers: face-offs.

In face-offs, teachers present real-life situations from the news that happened to high-schoolers, college students or celebrities because of choices they made. Students then have to take a side — or face off — about whether they agree or disagree with the choice.

“Offering real-world scenarios really seemed to resonate more with them,” Loyola says. “We got a lot more positive feedback after this year.”

The curriculum makes age-appropriate distinctions in other ways, too.

While students all explore the same standard the same term, Loyola says, “every single grade will look different.”

For example, each fall term the school focuses on the standard “play to your core.” However, whereas sixth graders might talk about being true to yourself in the face of peer pressure, seventh graders might address rebounding from texts, posts and comments that crossed the line. Tenth graders might grapple with the complexities of free speech online, while 11th graders might learn about developing positive search results with LinkedIn. Eighth and 12th graders, meanwhile, will focus on empowering younger students to play to their core.

And while TSI supplies the standards and age-appropriate scenarios, the curriculum reinforces Ravenscroft’s values — one of which is leadership, Loyola says. “That is an important part of our work with them,” she emphasizes.

Not only is leadership built into the eighth- and 12th-grade curriculums, but next year the school and TSI will collaborate on another leadership opportunity: a student advisory board composed of 11th and 12th graders who will give advice and feedback meant to keep TSI’s lessons relevant to students navigating an ever-changing social media landscape.

“This is another way we can give these students voice,” says Loyola, who points out that Ravenscroft students have had a voice in helping shape TSI. The company’s founder, social media expert and four-time All-American Duke University athlete Laura Tierney, is “really big” on feedback, including student and faculty focus groups, Loyola says. Ravenscroft student input not only contributed to TSI’s introduction of face-offs, but has influenced the company’s new gamified platform, which the school will adopt.

The new version turns the Social Institute’s lessons into an interactive game, in which students still navigate real-life social media scenarios but use their digital devices to vote on responses and “play” the curriculum. Students can compare their own scenario responses to other students in their class, the school and the nation. The platform also lets students hear advice from young leaders selected as video role models.

Loyola says the game version addresses another challenge Ravenscroft experienced with the original PowerPoint-based curriculum: inconsistent presentation. “When you have 50 different people teaching lessons that weren't written by them, you're going to have people approach it differently,” she says. In some cases, the teacher may just be a poor discussion leader. In others, the teacher may be resistant or think a topic — for example, sexting — is inappropriate.

With the new platform, Loyola says, “You have all the questions just right there, and an adviser can pause it and have more discussion, or can just let it run if they're not as comfortable with the discussion.”

Students like the changes, Loyola says, adding that Ravenscroft 11th and 12th graders who piloted the gamified version overwhelmingly preferred it.

Still, Loyola believes the original curriculum has fueled good outcomes at Ravenscroft School, including a perceived decline in sexting — or students sharing nude images via social media. Another anecdote she credits to the school’s heightened attention  on digital citizenship came earlier this year after the soccer team lost a big game to a local rival. When members of the rival team posted inappropriate comments about the match on Twitter, Ravenscroft players reacted appropriately, avoiding “a virtual war that could have spun out of control,” Loyola says.

“Our kids were like, ‘Why would kids put this out there?’ They immediately let adults know what was happening and did not respond, which I think is rare for teenagers,” the former longtime high school Spanish teacher says. “We can't help but wonder if that's not because we're constantly talking about topics like what you put online is permanent, and what you say online is reflective of who you are.”

Chris Frisella is a freelance writer who explores educational technology and its power to reshape learning and lives. He lives in Eugene, Oregon, where he's enjoyed volunteering in area schools. This is an updated version that was originally published on July 23, 2019.