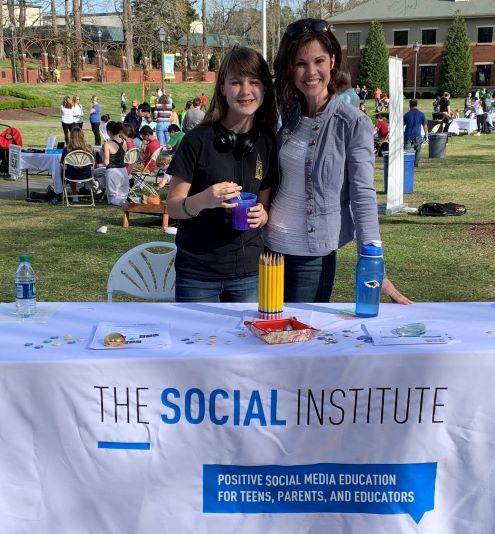 When Laurel, a 12-year-old from North Carolina, bumped into the CEO of The Social Institute – an organization devoted to helping kids navigate social media – the sixth-grader just wanted to thank her for her presentation.

But something else happened when she met Laura Tierney: The two connected.

“I wanted to go introduce myself to her because I appreciated what she was doing and what she was teaching us since my parents had instilled the same values within me," Laurel said. “It ended up being a two-hour brainstorm.”

Tierney, founder of the Social Institute and a four-time All-American athlete at Duke University, told her she wanted to keep in touch.

For three years, Laurel, who just finished eighth grade, has collaborated with Tierney and The Social Institute at Ravenscroft School.

The mission of The Social Institute is to empower students, parents and leaders to navigate social media and technology in a positive way. It uses age-appropriate, real-life social scenarios to get students thinking and talking about what they would do in those same situations.

Sarah Loyola, director of educational technology at Ravenscroft, says Tierney’s desire for input from faculty and students has been a key factor in the school’s successful partnership with TSI. The company’s gamified social media curriculum was co-created with students at 60 schools.

Laurel is one such student, and it’s easy to see why Tierney would value her opinions.

Laurel loves the arts: painting, singing, guitar, theater and creative writing. (She’s working on a five-book series of novels.) She is a STEM student whose Lego robotics team brought a trophy home to Ravenscroft this year. She enjoys history and hanging out with her friends — and her teachers. She leads Sunday worship for younger children at her church. And she and her family love to play “nerd games” together.

So, when Tierney invited the then-sixth-grader to help create a lesson for her peers, Laurel was game.

Each TSI lesson focuses on one of the company’s seven social standards, which complement the digital citizen standard within ISTE Standards for Students. The Social Institute’s standards are:

Laurel and Tierney’s lesson focuses on the “strike a balance” standard, which addresses prioritizing activities, managing digital distractions and valuing real-life moments. The context for the lesson was group chats — a distraction that Laurel knew firsthand.

“Back in sixth grade, I was a part of one group chat where I got 100 to 200 texts a day,” she says. Once, she turned off her iPod to take an hour-long flight. “The next thing I know, I have a hundred texts.”

Laurel contributed ideas for social sprints, which are exercises where students get a scenario, huddle in small groups for up to a minute to discuss what they would do in the situation and then share their ideas with the class.

People spend a lot of time on group chats,” she says, “and it's good to strike a balance between talking with people over text and in person because you miss out on a lot of things when you're texting those people: social cues, facial expression, whether you're kidding or not, instead of having to say, ‘Oh I'm joking’ two minutes later, and it blows out of proportion.

“I feel like a lot of people are saying, ‘Oh, I'd rather be on my phone than with my friend,” says Laurel, who enjoys social media but likes to connect in person.

So, she tried to think about scenarios that would meet her needs as a sixth-grader and also be fun. And she was delighted to see her classmates’ reaction to the lesson.

Students were engaged, talking about the sprint topics and having fun.

“I was proud of what I had worked on, and it was great to see it in action,” says Laurel, whose peers didn’t know she had helped create the lesson. “It was also fun to know what was going to happen well before my friends knew.”

Laurel’s collaboration with Tierney didn’t end there. In fact, the relationship has blossomed into a mentorship that Laurel appreciates and enjoys, her mother Nicole Carter says.

“They discuss upcoming ideas together, continue a mentor relationship and keep in touch through social media,” Carter says. “Laura has challenged Laurel in public speaking, digging deep to discuss why you might answer questions a certain way and has helped her develop her own awareness for how games work and enjoying the brainstorming process.”

For her part, Laurel acts as a “sounding board” to The Social Institute founder.

“Laurel’s remarkable combination of creativity and collaboration has helped spark our student-led approach at The Social Institute,” Tierney says. “Her strong and genuine voice represents the voice and needs of millions of students across the country.”

The teen also serves as one of the video role models in TSI’s new gamified platform.

As a video role model, Laurel watched one of the platform’s social sprints and made a video explaining what she would do in that situation. Her scenario was, “What would you do if you got a scary chain text?” You know, those “sixth-grade scary” messages saying things like, “The person you like will never like you back unless you forward this text to 10 people.”

Laurel’s video advice: “Guess what! These aren't real. You don't have to feel pressured into sending that chain text to carry that around because you have the support of your family, your friends and knowing that it won't come true. Plus, when you look back on them, most of them are just really stupid.”

Laurel is excited about TSI’s new gamified platform, where students “play” the social sprints and can see what responses other students in their class, their school and the country chose. “They're having fun,” she says. “It's a little competition.”

Laurel says her family likes strategy games that force players to think many steps ahead to emerge as the sole winner. That’s different from TSI’s gamified platform, where the goal is for everyone to win at social media, she says. But playing games with her family has helped Laurel figure out what makes a game interesting — and she sees those traits in TSI’s new platform.

“The pace of play is fast, everyone talks, opinions are all listened to, topics are interesting and relevant for myself and my friends and there is a sense of competition,” she says. “This all makes for a fun game.”

For Laurel, her involvement with The Social Institute has been a game-changer.

“This experience has helped me figure out where my passions truly lie,”she said. “Working with Laura has helped me continue to see what my talents are. I definitely enjoy being on stage, speaking to people, writing novels and exploring new ideas.

“I hope that continuing to work with The Social Institute, taking classes at my school and working in my community will help me focus for college.”

Chris Frisella is a freelance writer who explores educational technology and its power to reshape learning and lives.

3 strategies for engaging parents about using tech for learning

When parents are informed about how educators are using technology for meaningful learning, they are more likely to become passionate advocates for school technology. Here are three creative ways  beyond back-to-school night that give parents a glimpse into their students' school…

When Laurel, a 12-year-old from North Carolina, bumped into the CEO of The Social Institute – an organization devoted to helping kids navigate social media – the sixth-grader just wanted to thank her for her presentation.

But something else happened when she met Laura Tierney: The two…

When it comes to media literacy and our collective inability to tell fact from fiction online, there’s a lot of finger-pointing going on.

Take, for example, the widely shared study from the Stanford History…