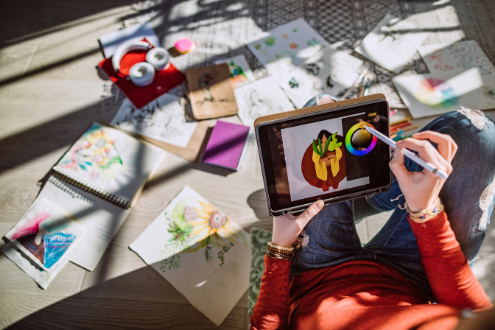 Back in middle school, Derek Ham used to hang out in the library making bitmap images in Microsoft Paint. Today he meticulously recreates historic scenes from Black history in virtual reality.

Getting the details just right, from the television to the pattern on the bedding, requires a unique combination of historical scholarship and artistic guesswork, says the department head and associate professor of art and design for NC State College of Design.

“It’s a little bit like being a paleontologist,” says Ham, who partners with organizations such as the Negro League Baseball Players Association to create immersive VR experiences that examine different moments in history through the perspective of Black Americans. “You have several bone fragments, and you need to fill in the gaps to see what the rest of the dinosaur looks like.”

It’s a relatively new application for Ham’s design and architectural skills — one that few would have anticipated just a few decades ago — and he found his way to it by accident when he tried on his first Occulus headset nine years ago.

“I stumbled onto the path that led me here, and with every project I learn something different,” he says.

While the Microsoft Paint skills he learned as a kid are about as relevant to his career as a high school keyboarding class is to a software developer, the creative mindset he developed in the process is what allowed him to pivot in response to new technology. In a rapidly changing world where 85 percent of the jobs today’s students will do in 10 years don’t even exist yet, preparing students for future careers requires teachers to think beyond hard skills and cultivate the underlying “soft” skills that will help them better adapt to a changing work environment.

In the past, soft skills such as communication, collaboration and creativity have often been treated as secondary in the classroom. But film teacher and Apple Distinguished Educator Michael Hernandez argues that educators should view them as core skills rather than as educational gravy. He cites the World Economic Forum’s list of top 10 job skills for 2025, which focuses primarily on soft skills such as originality, problem solving, ideation, analytical thinking, resilience and flexibility.

“No matter what, we have to prepare kids to be ready to adapt and pivot, and that’s not what we’re doing in schools right now,” Hernandez says. “Skills come and go, and you can learn them pretty quickly. It’s the mindset that really matters most.”

In a survey by BestColleges.com last year, 41 percent of Americans reported using soft skills like communication or creative problem-solving more frequently in their current jobs, while just 11 percent said they used hard skills such as coding. And given that the World Economic Forum's Future of Jobs Report estimates half of all employees will need reskilling by 2025, it’s clear that technology will continue to outpace students’ software-specific skills faster than teachers can teach them.

But that doesn’t mean hard skills aren’t still important. It just means teachers need to think about also developing the core skills behind the hard skills — for example, when students learn a specific programming language, what they’re really learning is how to learn how to code.

“Programming languages change all the time,” writes EdSurge contributor Christina Lewis, the founder and chief executive officer of the computer science nonprofit All Star Code. “Teaching only coding really isn’t enough to future-proof young people’s careers. The real skill that guarantees you a job in the technological world is knowing how to learn these skills.”

Here are five useful skills educators can teach students today to help them develop the skills they’ll really need for their future jobs:

Technology has permeated our lives so thoroughly that computer literacy has become as fundamental a skill as reading comprehension.
“We don’t need every student to become a coder, but understanding how code works is helpful,” says Tim Needles, a technology integration specialist and author of the ISTE book STEAM Power. “It impacts our lives in all sorts of ways we might not be aware of.”

Research commissioned by global software company KX found that more than 40 percent of students ages 16 to 23 can code or are learning how, and more than half believe coding skills will be important for their career prospects.

“If coding is the language of tech, and tech is the future of work, then young people need to learn this language in order to succeed in their upcoming careers,” Lewis says. “In essence, coding is a ticket into the party — being able to tell the computer what to do is an entryway into our technological world and, therefore, a path to upward mobility.”

Coding at any age introduces students to computational thinking concepts and equips them with important problem-solving and troubleshooting skills that can translate to all sorts of situations, both within and outside the workplace.

“Debugging code is one of the first things my students have to deal with,” Needles says. “Coding is a good metaphor for dealing with problems in life. It helps them understand how to break down these problems, take them line by line, look at the smaller elements and understand how things function.”

Storytelling isn’t just about entertainment. It’s a skill that lies at the heart of how humans communicate and teach each other.

“I think storytelling is one of the most important skills for students to have,” Needles says. “It applies to everything. It doesn’t matter if you’re in marketing or in a classroom or board room or at a tech company. We don’t know what the media will look like, but we know storytelling will be a part of the future because it’s who we are.”

Hernandez sees storytelling as a framework for learning, regardless of the subject or grade level. He approaches his journalism class as “basically a science class for the humanities” in which students practice researching, synthesizing information and presenting it to an audience. Storytelling, he says, is a form of teaching — and the best way to learn something is to teach it.

“Most learning is actually done through story,” Needles says. “The most effective teachers tend to be really good storytellers.”
In addition to helping students develop communication and creative thinking skills, storytelling for an authentic audience can be a powerful tool for building resilience as students learn to accept feedback and revise their work.

“When you publish it publicly and people see it, they’re going to react to it,” Hernandez says. “Sometimes it might be negative. How do you handle that? What do you do about it? It helps us let go of our ego so we’re more willing to make changes and take advice from peers or outside experts. That’s the resilience piece right there.”

From internal business reports to public-facing social media channels, communication is becoming increasingly visual. Understanding how to create and edit graphics and other visual presentations helps make students more effective communicators, regardless of the field they choose to work in.

“Visual storytelling is very useful because we remember more of what we see,” Needles says. “Retention is something like 80 percent as opposed to 20 percent of what you’re reading or hearing. The world is becoming more multimedia, and one of the skills I would advise any of my students to be aware of is how to edit and create graphics.”

“Creativity is a mindset. It’s not paint brushes or an iPad with Procreate; those are tools that can only get you so far. It’s the mindset of originality, of coming up with something new, knowing how to find inspiration and being ready to abandon something that’s not working.”

Online video viewership grew by 32 percent each year between 2013 and 2018. Today’s viewers spend, on average, more than 100 minutes a day consuming video content.

Teaching students how to make videos helps nudge them along the path from passive content consumer to powerful content creator. Not only does video creation help them develop digital literacy, but it can serve as an engaging vehicle for learning — and teaching — just about any subject.

“When students are taught some of those basic creation skills, it’s really empowering. It changes the way they learn,” Needles says. “When you’re able to synthesize your learning and create a video based on what you learned, it enhances the meaning. Every student remembers those projects. It makes an impact.”

Video production also lends itself to group collaboration in the classroom, allowing students to practice the collaborative skills they’ll need to function as leaders and team members in the workplace. In Hernandez’s broadcast journalism class, for example, each student learns every role on the team before settling into their specializations so they can better empathize with each other and appreciate each team member’s different strengths.

“The best workplaces are those where people help each other out,” Hernandez says. “The research all says that diverse teams — including racially diverse teams — are better at creativity and innovation than homogenous teams. Collaboration not only prepares kids to facilitate successful collaborative teams in the workplace, but it also prepares them to be good citizens who can that see there’s value in difference.”

Like the scientific method, design thinking is a step-by-step process students can apply to not only arrive at a solution to a problem, but to test out and refine their work. It provides them with a framework for learning and creating as well as for tackling whatever problem lies in front of them.

“We fundamentally believe people should be problem solvers,” says Babak Mostaghimi, executive director of innovation and program improvement for Gwinnett County School District in Georgia. “I think if we all as educators really dig down deeply into what we believe is true, we’d all reach a point where we realize that many of the things our children are doing on daily basis aren’t fundamentally necessary to their success in life — or for their ability to help the world succeed. I think things like design work help us to actually build a set of skills we all fundamentally believe kids should have.”

Because the design thinking process begins with considering the needs of the end user, it teaches students the value of empathy as they practice viewing the world through someone else’s eyes.

“If you’re creating for people, you want to start with empathy and relating to your audience. What will make this easier for people?” Needles says. “Almost everything we interact with is designed by a person, and every person has experienced both good and bad design. It’s empowering for students to learn design and realize they can improve all of that.”

From chefs who specialize in 3D-printed food to designers who focus exclusively on upcycling trash, today’s students will need to be ready for all sorts of jobs educators can’t even imagine yet. While these five skills aren’t an exhaustive list, they currently touch every field and industry. Even if students don’t work directly with these skills in their future jobs, they’ll most likely find themselves collaborating with those who do.

“It comes down to leadership,” Needles says. “If they have any desire to be a leader, they do need to have at least some understanding of what everyone does.”

Back in middle school, Derek Ham used to hang out in the library making bitmap images in Microsoft Paint. Today he meticulously recreates historic scenes from Black history in virtual reality.

Getting the details just right, from the television to the pattern on the bedding,…

Needles, an art teacher at Smithtown High School East on Long Island, New York, puts STEM in his art classes by having his students use …