Speak Up About Racial Microaggressions in Schools 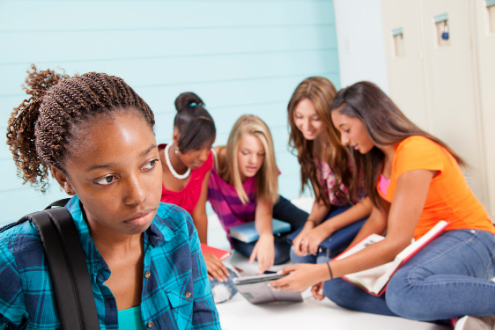 Cheyenne Batista, a former classroom educator and school founder, was about to get into a taxi in New York’s swanky Upper East Side in the fall of 2020 when the insult occurred. A woman exiting a taxi that Batista had just hailed made a comment that stung like a paper cut.

The woman had instantly made an assumption about Batista based on her skin color. Batista was actually heading downtown, but the woman assumed she was en route to a poorer part of town.

Microagressions – like that comment – tend to be subtle, unconscious or unintentionally prejudiced. But they are not harmless.

"They come quickly, when they are least expected, and are razor-sharp," she said.

In her ISTELive Lightning Talk, "Speaking Up About Racial Microaggressions in Schools," Batista shares how frequently microaggressions occur in school, and emphasizes that they originate not just from other students but from educators, staff and school leaders.

A racial microaggression can be a teacher expressing surprise that a student speaks English so well even when the student has lived in the U.S. her entire life. Or when a student is told he must be in the wrong class and that auto shop is just down the hall.

Students of color are almost twice as likely as white students to report having observed or experienced a professor telling a joke that mocked or degraded a racial/ethnic group.

In a study of Mexican immigrant students in elementary school, 42% perceived themselves to be the target of teacher discrimination at least once by the time they reached fourth grade. By adolescence, immigrant youth say they experience ethnic discrimination from teachers approximately 2-3 times a year.

Some math teachers perceive their classes to be too difficult for Latino and Black students. The effect of being underestimated by math teachers decreases a GPA.

The situation is not hopeless. Batista reports that students who have teachers who have learned strategies and practices to boost and sustain high expectations had math test scores that were 28% higher than their peers who did not have teachers with this training.

Too often, those on the receiving end of microaggressions are left to speak up for themselves. The situation leaves them open to gaslighting, accused of imagining the slight or even accusations of reverse racism. In these situations, white people can and must be allies. Batista offers the following ways to help:

Educate yourself. If you still believe in race neutrality, let go of that notion. Even BIPOC are often complicit without realizing it and commit harms against students unknowingly. "If this is your work to do, get to it,” she says. “Establish a shared language as a community and become fluent in it so that you recognize microaggressions as soon as you see them.”

Leaders must ask themselves how they invest the time, money and resources to make these changes happen? How are they modeling needed changes?

Silence is costly. When you overlook an offense, the attitude is perpetuated.

Put out the gaslight.

If someone asks you to address a microaggression, be genuinely humble and open to the conversation. Apologize for wrongdoings, even when they are unintentional.

Batista points out that other people were present who overhead what the woman in the cab said to her. Imagine how different that experience could have been if one of those people had spoken up on her behalf.

Watch the video below to see Cheyenne Batista's ISTE20 Live lightning talk, and then register for ISTELive 21 to see hundreds of thought-proving like sessions like this one.

Jennifer Snelling is an education blogger from Eugene, Oregon, who explores all facets of education technology.

Tips for Making Documents Accessible for All Students

Imagine spending hours on a PowerPoint presentation for your class, adding all the pretty colors that will make it pop. You spend extra time squeezing in all the text details and editing to ensure all the information is there for your students. Now, imagine that someone in your class can’t see…

Cheyenne Batista, a former classroom educator and school founder, was about to get into a taxi in New York’s swanky Upper East Side in the fall of 2020 when the insult occurred. A woman exiting a taxi that Batista had just hailed made a comment that stung like a paper cut.

There’s a lot of guidance out there on how to talk to parents about student privacy, the home-school connection and acceptable use policies. And it’s valuable information. But what if you shared a new story this year? One that informs parents and excites them about the opportunities your…