Visionary ISTE Founder Left a Legacy of Innovation and Promise 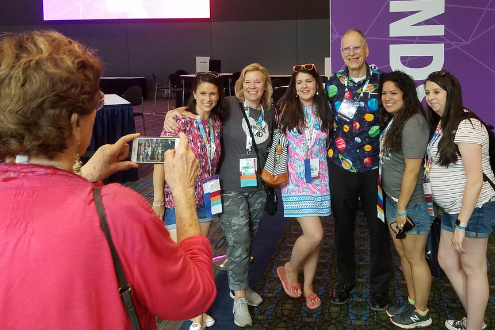 Dave Moursund, who founded the organization that would become the International Society for Technology in Education (ISTE), died Sept. 1 at the age of 84.

He helped transform a relatively small group of computer-using teachers in the 1970s into an international organization that serves educators, leaders and higher ed faculty, and influences education policy at the national level.

Moursund was a mathematics professor at the University of Oregon in 1971 when he received a National Science Foundation grant to start both a doctorate and master’s degree program in Computers in Education. The doctorate program was the first of its kind in the nation.

He was passionate about the potential of computers to improve society, and he felt that educators needed to be trained and ready to use them to teach.

“Teaching teachers turned out to be much more fun than teaching math students or engineers,” Moursund recalled in a 2019 interview. “I had found what I wanted to do!”

While involved in those programs he, along with some of his students, branched out to publishing journals for computing teachers. That grew into a movement to create an international organization dedicated to getting more teachers interested in using technology to enhance education.

An early advocate of computing in schools

Long before computers were a mainstay in schools, Moursund believed people should let computers do what they do best, freeing up humans to do what humans do best. He soon learned that that idea could be a tough sell. In 1979 a hot topic of debate was whether students should be allowed to use calculators in schools. Moursund said they absolutely should. Thirty years later, the same debate erupted over whether students should be allowed to use cell phones in schools.

He defended those devices, too.

"Well, that cell phone is equal to the $10 million supercomputer of 30 years ago,” he said in 2019. “And you've got the web, and you've got the software that could solve math problems and many other kinds of problems; you've got the instructional material that can put you in simulated environments or provide you with lectures."

Even though he'd been away from the organization for decades, he cared deeply about ISTE and reached out to ISTE CEO Richard Culatta periodically. Culatta said he had last spoken to him this summer.

"Dave was a pioneer and visionary who never lost his curiosity, his love of learning or his desire to make the world a better place," Culatta said.

Anita McAnear, one of the original educators who helped start the organization, said Moursund touched many, many lives, not just in education but in the natural world too.

“Dave Moursund left behind a legacy of tremendous impact on countless students and educators through his message of effective use of technology, especially AI, to produce a good and sustainable life for people and to create a balance with nature so that other life forms also survive and prosper,” she said.

He became intrigued by the potential of AI

Moursund lived in Eugene, Oregon, where he continued to contribute to the website, blog and newsletter he founded, Information Age Education, which offers free online educational materials. He became especially interested in artificial intelligence, calling AI-using computers “the largest change agent in human history since the development of written language some 5,500 years ago.”

McAnear was not surprised that he continued learning, thinking and publishing to the end.

“He remained dedicated to his family and friends and to his vision of the promise of technology to improve education, the quality of life, and the preservation of other forms of life,” McAnear said.

While Moursund spent his life focused on the ways computers could aid education and society, he was also deeply concerned about the need to help students become good human beings.

“You go to school to develop two different kinds of skills. One is to interact with other people. To be part of the culture, live with other people, work together with other people. Be a human being. That's hard, it takes lots and lots of years with good role models in order to have that happen,” he said. “The second part is to learn to function in the type of society that you're in. … The food that you eat. Where you travel. How you cooperate with people in other countries and so on. And computer technology is just part of what the world is now. And it's changing rapidly.”

Over the years, ISTE expanded from a small group of teachers into the international membership organization it is today, which reaches over 100,000 educators around the world. ISTE is the creator of the internationally recognized ISTE Standards. The organization also puts on events, including ISTELive, a conference that draws over 20,000 participants to its face-to-face events; publishes books and periodicals; offers courses on a variety of edtech topics; and owns EdSurge, an award-winning news site focused on the impact of technology on education.