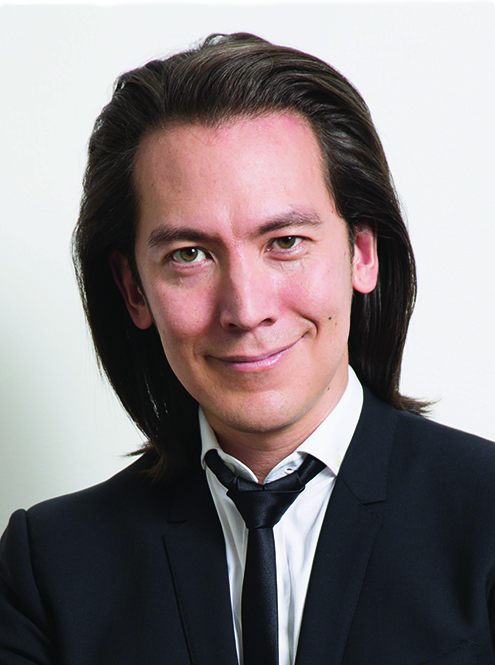 Walsh is the CEO of the very appropriately named consultancy Tomorrow, but his description of his role is more glamorous: global nomad, speaker and consumer trend scout. It’s a big assignment – and his focus on tackling it is laser-sharp.

But his bigger mission is to make sure the world is ready for these changes. “For all this talk of technology and disruption, it’s the human perspective that’s missing,” he told an audi­ence in 2016. “We are profoundly changing our behavior.” And there won’t be an industry that isn’t impacted by this change.

The good news: Educators have “ringside seats” to what’s coming, he asserts.
For instance, the students in your classroom will think it’s normal when toys have conversations with them (and send a report on the data straight to adults) and wireless head­phones are essentially (disturbingly) permanent implantable devices. They’ll expect their “smart” tennis shoes to buzz in metropolitan cities when something interesting is happening nearby. And before you ever see them in the classroom, their own bathroom mirrors will have advised them on exactly why they look so good today.

In other words, the relationship with technology will be personal, and educators will need to adjust to teach that way as well. It starts with concentrating on problem-solving skills, which will be most in demand, according to Walsh. “Our ability to understand people’s ex­periences will be key to the future of our companies,” Walsh said. “[Students] need to think big, think new, but most importantly think quick.”

And this means that agile thinkers who can briskly embrace change will be in de-mand in the job market. Walsh himself lives this example. He graduated from the Uni­versity of New South Wales in 1999 with a degree in commercial and media law. He was ranked fifth in the world in the XVIII World Debating Championships. Imme­diately following graduation, he launched internet.com in Australia, creating a leading local technology news and events media network during that web boom.

Since that success, he travels 300 days a year to suss out data and make sense of how it will impact countries. His clients include many of the global Fortune 500; he previously founded Jupiter Research in Australia and has also held senior strategy roles at News Corporation in the Asia Pacific Region. He’s also the author of the bestsell­ing books The Dictionary of Dangerous Ideas and Futuretainment. His latest book is The Algorithmic Leader: How to Be Smart When Machines Are Smarter Than You.

We sat down with Walsh, an ISTE19 featured voice, to get his take on tech top­ics like AI, 5G networks and our personal relationships with technology.

What’s the most critical ethical issue related to technology our kids will face in their lifetimes?

In the early days of the web, there was a lot of optimism that the digital age would help transform knowledge, understanding and tolerance by democratizing informa­tion. Few anticipated the rise of fake news, algorithmic filter bubbles and the short­ening of attention spans through social media.

In my view, the foundation of ethics will be critical thinking around information authenticity and data anthropology. Rather than remembering facts, the real skill in the 21st century will be asking questions about facts, like: What is the source of this information? Who collected the data and for what purpose? Is this hidden bias and was the sample representative?

You’ve said we need to teach the coming generation to get comfortable with ambiguity and to be flexible in the face of change. how can educators teach students to embrace uncertainty?

We need to help students embrace probabilistic thinking. Humans already tend to be naturally deterministic; we see the world in black and white. We are taught that X is Y, and not to act on information unless we are 100% sure. Unfortunately, that’s not how complex problems in the world work.

In this new age of data and AI, it will be necessary to coach people to be more comfortable with operating with uncer­tainty. That means being confident to make decisions and act when you are only 70% sure of something, but being able to update your confidence levels as more information becomes available.

Of course, being able to handle ambiguity with Bayesian flair is only one reason why statistics will be such a valuable part of 21st century curriculuma. Even more than traditional computer science, statistics and probability are at the heart of modern AI and the machine learning revolution.

You’ve said that technology and automation will free us up to have more time for family and learning. but that’s been the promise of automation for decades and it hasn’t come to fruition. The work week may be more flexible but it isn’t shorter. Why do you think this next wave will be any different?

We’re at a crossroads when it comes to automation. Techniques like “robotic pro­cess automation” have already started to replace human clerical activities in industries as varied as insurance to logistics, banking to retail.

If a task can be easily defined and repeated without much variance, it’s an ideal candidate for being automated. Leaders in those organizations now face a choice. Do you automate and decimate your human capital, or do you automate and elevate the capabilities and responsibilities of your people? Automation may not necessarily translate into more free time, but it will hopefully mean that our time is spent doing more interesting, meaningful and purpose-driven work.

We’re getting used to having Wi-Fi in classrooms, but 5G networks operate at mind-boggling speed and have the potential to be much more densely deployed than Wi-Fi, increasing their reach, for better or for worse, into the details of our lives. How might learning change as a result?

The future benefits of 5G are more subtle than simply faster speeds. The advent of 5G is really the story of the rise of intelligent networks that can be configured and personalized for specific needs, whether it be for a high bandwidth application like real-time video, augmented or virtual reality environments, or the creation of a dedicated network for sensors and connected devices in the classroom.

Should teachers be concerned about being replaced by AI?

Machines may ultimately be more capable at designing an adaptive curriculum for a particular student, grading papers at scale and keeping track of the latest research in a fast-changing field, however, they will always lack the cultural context, empathy and compassion that comes from having a human intermediary and guide in the educational experience.

It doesn’t feel like your data will always be safe and always be private given how many data breaches seem to occur with major corporations on a regular basis. how are new technologies solving this problem, or are they potentially making it worse?

Unfortunately, cyberinsecurity is simply a new reality of the algorithmic age. Even as we start to deploy AI and machine learn­ing in the fight to protect ourselves against hackers and outside forces, we’ll see the same technologies and adversarial AIs being weaponized and used against us in a constant struggle for supremacy.

While there are no simple technological fixes for this situation, we do have a respon­sibility to coach kids and the next generation on taking steps to safeguard their own data, understanding risks to their online reputa­tion and knowing how to protect their digital identities.

As AI makes the digital world ever more enticing and personalized, how can we be sure that we don’t become even greater slaves to our devices? how can these technologies be used to encourage more balance between the online and offline worlds?

Our smartphones are already like mobile Skinner boxes capable of seducing us with interactive reward loops and algorithmically targeted cognitive mind candy. And yet at the same time, with the right guidance and mindset, our devices can also be portals into infinite worlds of knowledge and potential.

Our challenge, both as educators and students ourselves, is to adopt an intentional approach to the role of technology in aug­menting our capabilities and allowing us to solve more complex problems.

If you look back at the original vision of Douglas Engelbart, who famously invented the mouse and graphical user interface, it was at its core about computers augmenting human intelligence. Not, I would suspect, launching animated pigs into space or track­ing the every move of a family of narcissists.

How do you manage the firehose of information that comes at you? how do you make sure you are focused on the most essential things you need to learn?

Knowing what’s important and worth paying attention to is never easy. The ques­tion I always ask myself is: Is this new and is it true? My simple hack when trying to get my mind around a new industry or an emerg­ing technology is to spend some time with someone deeply embedded in the field and use their specialist frame of reference to filter out some of the noise. I then look for simi­larities and convergences with other fields or trends in other industries to see if there are patterns that are bigger and tell a more interesting story about the future.

Is AI Ready To Meet the Needs of Learning Recovery?

Millions of school children walked into their classrooms at the start of the academic year lacking one crucial element that should have set them up for success: the prior knowledge they need in order to take on a new grade level.

Because of COVID-related learning interruptions,…

When I became a coach at St. Vrain Valley Schools 10 years ago, I was passionate about supporting early-career teachers. That passion remains today. There’s nothing more fulfilling than providing effective coaching to help my colleagues develop and grow.