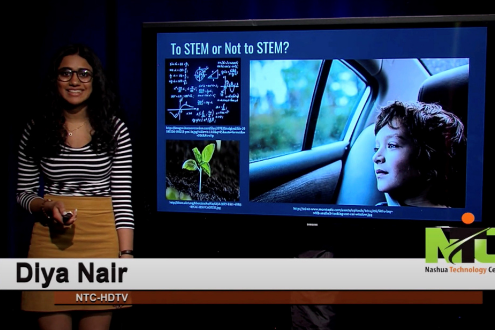 When Alexandra Marlette joined her Atlanta area high school’s technology club, she was the only girl. Despite having experience programming complex robots, she was talked over, not listened to and a 15-year-old boy told her that her skirt was getting in the way of her programming.

As a junior in high school, Marlette says she was on the verge of leaving technology. After she became a leader in the school’s technology club, the harassment only increased. When she told the teacher, his response was to put her in charge of the fashion design group.

“Because, apparently, he believed all women inherently know how to sew,” she quipped.

To women in technology, such roadblocks are familiar. According to the Million Women Mentors, obstacles such as these are part of why women make up 52% of the college-educated workforce but only 29% of the STEM workforce, and 50% of women in STEM fields drop out within the first 12 years.

Marlette has since graduated now works as a technical product owner, where she translates what the business needs into a technical design that fits that need. But it almost didn't work out that way. When it came time for her to pick a major, she almost passed on computer science. She was afraid the boys from her high school, or others like them, would be in her college courses.

She credits three circumstances that led her to follow her dream despite her fears. First, being introduced to robotics at a young age gave her confidence. Second, she was able to be a role model through her Girl Scout program. Finally, she found a supportive community of like-minded women through National Center for Women and Information Technology (NCWIT).

In fact, these are some of the keys to attracting and retaining women to STEM fields, according to NCWIT’s Learning From Young Women study.

“We have been able to see girls who were exposed to computing during middle school through our programs, and they are now working at tech companies,” says Jannie Fernandez, NCWIT’s K-12 Alliance director. “We all have the ability to be change agents, to influence, help women see themselves in the field.”

Elementary school boys and girls are often exposed to science and technology equally. Participation remains relatively balanced as computer science is introduced in middle school. But research shows that while in middle school, girls began to self-deselect.

When ISTE member and Arizona Board of Education member Janice Mak taught middle school, she had computer sciences courses with 37 students and only 3 girls enrolled. She took action and started a Girls Who Code Club in collaboration with Arizona State University.

NCWIT’s Active Recruiting Handbook offers some advice on how to attract girls to tech fields:

Look beyond girls who are passionate about math and science or those who attend robotics camp. Computing has infiltrated all fields of society. Encourage girls who have never considered STEM. You'll find eager participants in unexpected places, from those 4H kids interested in farming to students who excel at art.

Reach out to parents

You have two audiences: girls who attend your school, and those who influence choices, such as parents. All parents want their kids to succeed. When you share the need for CS skills in all fields, chances are, you'll win them over.

When you create flyers and posters to advertise the class, make sure images depict gender and ethnic diversity. If girls don't see themselves, they likely will assume it's not for them.

There's safety in numbers, especially for adolescent girls. Encourage girls who are interested to invite friends, or better yet, encourage an entire group to join together, whether it's the cheerleading squad or a service or social justice club.

New Hampshire junior Diya Nair won a regional robotics competition in elementary school but a boy told her that girls weren’t good at STEM. She lost her confidence for a while, but in middle school she found enthusiastic and supportive biology and chemistry teachers. The school asked her to speak at her middle school graduation.

She became vice president of her school’s Innovations Club. “My teachers and things like NCWIT helped boost my confidence. I was one of two girls in the club, but we kept our heads high. We know we are needed and valued.”

Fostering confidence in girls through a welcoming classroom environment and celebrating small wins are two of the best things teachers can do to help girls, says Marlette.

“If you don’t have a welcoming environment in your classroom for people who haven’t coded before, you will be excluding people,” she says. “And congratulate students on small wins. Failure is part of the process of getting to the end, so celebrate when you can.”

Girls who’ve had mentors are 2.5 times more likely to be confident in their ability to succeed in school and careers. In the summer of 2020, the National Girls Collaborative Project (NGCP), which collaborates with girl-serving informal STEM education programs, implemented a three-week summer camp for girls ages 13-16 focused on building relationships with mentors. Katarina Lucas, NGCP’s senior program manager, says the idea would work well in schools, too.

The camp had several parts. First, girls met individually with a different woman working in the technology field each day. The girls then participated in activities that allowed them to demonstrate their competency related to one of the role model’s work. For instance, one role model uses microscopy and turns that into a fashion design. Girls used various online tools such as Sketchpad to create their online fashion design. Then, they shared their design using Flipgrid.

“Sharing with an expert and peers can be a powerful way to inspire confidence,” Lucas says.

When girls see women in tech fields, they are more likely to see themselves in those roles as well. Marlette took on that role while in high school. She earned her Girl Scout Gold Award and NCWIT’s Aspire award by teaching girls about computer science. She taught a group of 15 girls about coding. They made music, created mobile apps and programmed robots.

A supportive community can also show girls the varied opportunities in tech careers. It’s not all coding all the time.

“I had a crisis of faith my junior year in college because I realized I didn’t want to program for eight hours a day,” Marlette says. “Those experiences, plus seeing different opportunities through internships, made me think back to the creativity of computer science and programming and why  I wanted to go into the field,” she says.

NCWIT’s Jannie Fernandez says that the work of building a strong community of women in technology is paying off.  “We have been able to see girls who were exposed to computing during middle school through our programs and are now working at tech companies,” she says. “We can see how the supportive community helps them persist. It’s not just about access, but also persistence.”

As the 2020 winner of NCWIT’s Aspirations in Computing award, Nair had an opportunity to put this idea into practice. While in quarantine, she participated in a six-week summer program called Data Science for Social Good. She learned java and python, then created an app to track how the pandemic has disproportionately affected the LatinX population.

“We always talk about imposter syndrome within the community of girls in tech. So many girls talk about how they’ve been discouraged, but NCWIT is so uplifting,” she says. “If you have the slightest interest in science, NCWIT brings you in and allows you to flourish. It made me Diya 2.0.”

Here are some of the organizations working to recruit and keep girls involved in technology. The following recommendations are by ISTE members Kimberly Lane Clark and Janice Mak. Lane is an engagement director and edtech consultant and Mak sits on the Arizona Board of Education and NCWIT’s K-12 Executive Council.

Black Girls Code
Through workshops and after school programs, Black Girls CODE introduces computer coding lessons to young girls from underrepresented communities in programming languages such as Scratch or Ruby on Rails.

Girls in Tech
This group focuses on building partnerships and hosting events for college and young professionals for skill-building. As part of the Dallas chapter, Lane hosted a STEM in the Park day, which allowed girls to meet working professionals and see the many options available.

Girls Who Code
Girls Who Code offers after-school clubs for grades 3-12, summer immersion programs and now has an alumni network for women beyond college.

Million Women Mentors
This organization connects women or girls interested in the field with mentors in STEM fields.

National Girls Collaborative Project
NGCP provides resources not just for the girls but also for adult influencers by bringing together organizations across the U.S. dedicated to increasing female representation in STEM.

National Center for Women and Information Technology
NCWIT's Aspirations in Computing program is a community of 20,000 high school and college women in computer science. The TECHNOLOchica Initiative works to bring more Latinas into the workforce. The NCWIT Counselors for Computing (C4C) program provides information and resources that help counselors match girls to programs.

STEM Gems
This is a resource for after-school specialists providing short discovery experiences related to STEM.

This is an updated article from 2021.