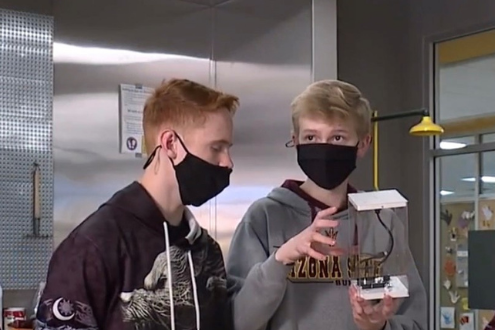 Six students at ASU Preparatory Academy Polytechnic High School did. Deaglan Salado, Hafsa Kaysan, Samantha Llagas, Elijah Linman, Ryan Robinson and Sawyer Ganes will get the chance to find out early next year when they launch their experiment into space on the next SpaceX Rocket operated by Blue Origin.

The opportunity came after the team, who call themselves the Hydrophobes, entered the NASA TechRise Student Challenge and became one of 57 teams out of more than 600 entries to win a spot on the journey. The project will study the effects of sub-gravity on how sponges absorb water, or don’t, while in space.

How did the Hydrophobes come up with their idea? Brainstorming, says teacher Irvin Goutcher, who teaches math, science, STEM and engineering for grades 9-12, saw the contest and brought it to each of his classes. Sawyer Ganes, a student in Goutcher’s engineering and project-based learning class, mentioned sponges.

Together, the six students from the project-based learning class refined the idea, wrote a paper called, How will Hydrophobic and Non-Hydrophobic Sponges React With Water in Microgravity? and submitted it to NASA.

“When we first heard our project was chosen, it was pretty exciting,” says student Elijah Linman. “We were all celebrating when we learned what had happened.”

Other winning proposals included measuring greenhouse gases, experimenting with space farm irrigation systems, lunar dust mitigation, exploring human health in space, and understanding the effects of microgravity on physical phenomena ranging from the behavior of waves in liquids to the effectiveness of inkjet printing. Each winning team receives $1,500 to build its experiment.

Proposing the experiment was just the beginning. Now, the Hydrophobes must build it. Each team’s experiment must fit into a 4-by-4-by-8-inch container and cannot exceed NASA’s one-pound weight limit. The Hydrophobes’ container must include two sponges, one sprayed with hydrophobic (or waterproofing) spray, a syringe, a motherboard, two small lapel cameras, and LED light strips.

The team is still working on sizing things down to fit. The items, once finalized, will fit into a custom-made acrylic box, where they will sit for about eight months until launch.

The team has consulted with NASA scientists throughout the process to ensure their experiment meets specifications for flight.

In addition, the students must program a microcontroller to spray water onto the sponges in microgravity. If all goes smoothly, a tiny motor will power a needle to puncture the bag of water to spray onto the sponges. Sensors will turn on the lights and camera to record it all.

To do this, their microcontroller has to communicate with NASA’s computer, which powers everything on board. They are allotted only 5 volts of electricity to complete the task.

The flight will last about 11 minutes with only about three minutes of microgravity, or weightlessness, when the magic happens. Or doesn’t. That’s exactly the point.

“That’s the beauty of the experiment. We don’t know what the results will show yet. We have theories and hypotheses. We just want to know what the effect of gravity is on that,” Goutcher said. “Is the gravity what's pulling the water into the sponge, or is it the effect the sponge has with some sort of capillary action where it will absorb the water whether there ’s gravity or not?”

The students are gaining real-world STEM experience by designing, then building the experiment, and writing code to operate and collect data. It all invokes the ISTE Standards of Innovative Designer, Knowledge Constructor, Computational Thinker, and, most importantly, Empowered Learner.

“Timing is everything,” says Goutcher. “That’s part of the excitement of working with NASA. We have to get the timing down, fit everything in the box, and weigh less than a pound. We have to problem solve all these different things and come up with a solution.”

The team is close to having the box put together, with a few items left to size down. Once the rocket returns to Earth, NASA will ship the container to the students, assuming the rocket lands without destroying the evidence. Potentially, NASA could apply the findings to help astronauts shower in space or water plants.

Jennifer Snelling is an education blogger based in Eugene, Oregon, who explores how technology enriches and enhances learning. Photo by Charlie Leight/ASU News