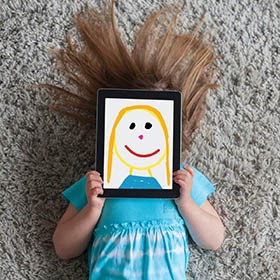 Melissa Edwards, an instructional technologist for Winston-Salem/Forsyth County Schools and an ISTE member, and Natalie Strange, media coordinator at Piney Grove Elementary School in Kernersville, North Carolina, surveyed their resources at hand and began to wonder. With grant money already exhausted for technology support at the K-5 school of 600 students, how could they create and sustain an interactive learning environment with just seven leftover Kindle Fire tablets and a storage room filled with discarded teaching tools?

Their imaginations kicked into full gear and suddenly those dusty world globes with the Soviet Union boundaries took on new relevancy. What if they covered them with chalkboard paint and used them to draw jet streams or ocean currents? What if the Kindles were used as exploration stations and not-so-new plug-in laptops were brought back to life for research? A creation station could host students who wanted draw or build things using technology.

And the Piney Grove Science, Technology, Engineering, Arts and Mathematics (STEAM) Lab was born. With little or no extra cost, these two educators transformed a storage room into a space for integrated learning, and teachers, using a STEAM strategic plan they've developed, now clamor to reserve time for their classes during regular school hours.

Less than 10 miles down the road, energetic, dedicated principal Sean Gaillard has opened Wiley Magnet Middle School this fall as a STEAM magnet school after guiding his building under a STEAM pilot for two years, first with sixth graders and then with seventh and eighth graders. But when his magnet application for federal funds was denied, he asked the school board for permission to operate as a magnet school anyway and received support. By the end of the enrollment application period for the new school, he had 200 additional student sign-ups and a waiting list for 2014-15.

" "I'm one of those guys who thrives on change in education," " he explains. That is how you grow. " "STEAM is good teaching with a niche," " Gaillard says. " "If you tour here, you will see teachers inspiring and developing innovations. Problem-based learning is key and the collaborative link is huge if you're going to roll with STEAM." "

Beginnings of an idea

So what exactly is STEAM? It's definitely not just another vowel to the science, technology, engineering and math (STEM) movement.

StemtoSTEAM.org defines STEAM as a movement with three objectives: transforming research policy to place art and design at the center of stem, encouraging integration of art and design in K-20 education, and influencing employers to hire artists and designers to drive innovation.

Although Georgette Yakman founded and developed STEAM education in 2006, the movement gained momentum with a push by artist John Maeda, then president of the Rhode Island School of Design (RISD) and today a design partner at Kleiner Perkins Caulfield and Byers, a venture capital firm based in California's Silicon Valley. He promoted STEM to STEAM in education when he realized that technology, business, design and art are all intertwined when it comes to creating innovative products and equipment that not only enhance lives, but improve economies.

You need only look at Apple's success under the creative chops of Steve Jobs to understand how technology products designed with an artist's touch have such mass appeal. The artistic influence " "humanizes" " and simplifies the user experience, making it more desirable, in Maeda's view.

According to Mark Milloff, a professor of foundation studies at RISD, his school is training students to use technology as 21st century artists. " "Most students today are pretty advanced in technology. Ten years ago, only a few had laptops. Today, 30 to 40 percent are familiar with coding." "

Milloff emphasizes that the integration of the arts and technology is not about teaching software, but rather establishing a mindset that a computer is a tool, not unlike charcoal and paint.

ISTE member Gigi Johnson's work in digital media through the Maremel Institute and teaching at the University of California, Los Angeles, Herb Alpert School of Music gives her a unique perspective on integrating the arts and technology. She believes that coding should be in every student's learning environment because being able to create from the backside of computers is a form of creativity.

" "There is a movement that kids should learn to code as if they were learning a foreign language," " she explains. " "All cultural arts are massively impacted by technology. I spend a lot of time with artists who struggle with using and understanding technology." "

Johnson also believes the reverse is true: Technologists can benefit from integrating and understanding the arts. But although much is happening as a result of the STEAM movement, professional development in the area is fragile.

Weaving the arts into an established, integrated curriculum is a natural in the eyes of many educators, but still not everyone is convinced. At least not at first.

In Pittsburgh, ISTE member Jamie Kasper serves as the associate director of the Arts Education Collaborative (AEC), bringing a broad background as a musician and classroom teacher, as well as a fine arts and humanities adviser to the Pennsylvania Department of Education. Kasper has been with the AEC since 2010, where a primary goal is to " "strengthen education by making the arts central to learning through collaboration," " according to the AEC website.

The AEC offers professional development training through its Leadership Academy, where participants can network and progress to become leaders in their schools and the community.

Kasper believes the arts can be integrated into the original STEM movement " "if it is purposeful, and not just thrown in to see what sticks. We need to be careful not to just toss it into another subject," " she says. " "That cheapens the integrity of both the art and the other subject." "

She cautions that collaboration in the initial stages means bringing everyone to the table to express ideas, then establishing a partnership. " "People sometimes think that because they 'consume,' they know all about the subject. Usually they don't. We must pair with those who have true expertise." "

Sure, some people will see integrating the arts into the studies of science, technology, engineering and math as only a trend and " "fluff," " Kasper recognizes, but she points to museums that eagerly talk about how technology works in that environment and how art makes a person think differently. She says art is a communicative tool, whether delivered through movement, sound or words.

Kasper heads up a professional learning network within ISTE called Arts Educators Network where members share resources and ideas. " "It is our little space to hang out, a place for people to talk about things they might not be able to talk about anywhere else," " she explains.

Arts Integration Specialist Susan Riley travels the country speaking to groups large and small about what integrated curriculum is and what it is not. She is the founder of EducationCloset, an e-magazine focusing on teacher professional development that includes arts and technology integration, free lesson plans and annual online conferences. A frequent contributor to print and online publications including Education Week and Edutopia, Riley's most recent book is titled No Permission Required: Bringing STEAM to Life in k-12 Schools.

" "When we authentically integrate across content areas, we are connecting, teaching and assessing two or more standards with intention and equity," " she wrote last year in Edutopia.

A former music teacher, Riley acknowledges that there is some nervousness about adding the arts to STEM, but she attributes that to the pace of integration, evaluations, revamped standards and budget cuts.

Concerns that the STEAM movement focuses mainly on design, visual and media arts are addressed by Riley, who acknowledges, " "Lots of people concentrate on design, but there are other areas too, such as music paired with math, dance choreography with science and theater scenery with engineering. Looking only at design shortchanges STEAM.

" "People get excited about STEAM when they truly understand it," " she says. " "Aligning standards takes work. Most have not seen STEAM in practice and there is a curiosity about it. Teachers want to see it." "
Riley provides free lesson plans specific to arts and technology integration on EducationCloset. One such plan involves students discovering or designing a font that is representative of a famous artist. The students then discuss how technology can be used to market the artist using the font, how the fonts are used to convey a message and how print and multimedia uses technology to market messages.

But Riley insists that meaningful integration will require professional development. " "People need collaborative time, time to reflect and not be evaluated right away. We must shift how we address an initiative like this." "

" "Art is all around us," " says New Hampshire's Marcia McCaffrey, president of the State Education Agency Directors of Arts Education. " "One of STEAM's goals is to show the role that technology drives in arts. This is not just another way of integrating the arts. It is about bringing parity to each subject. STEAM is about 'I see it now.' " "

McCaffrey was instrumental in working for a revision of the National Core Arts Standards to include media arts. She serves the New Hampshire Department of Education as an arts consultant and has a personal background in dance, including instruction.

That's one reason an initiative in New Hampshire called STEAM Ahead, a collaborative partnership between the Manchester School District, the University System of New Hampshire, Manchester Community College and the local business community, is receiving attention. The idea is to increase the number of graduates with skills in science, technology, engineering, arts and mathematics to drive economic development.
STEAM Ahead has been implemented at Manchester High School West, where the expertise of all partners is infused in curriculum.

From coast to coast, the STEAM movement has its believers who passionately teach the connectivity of science, technology, engineering, art and math. As with most new ideas, there were skeptics when it was first introduced, and some remain. But experts, such as Kerry Dixon, whose multiyear professional development trainings in the Columbus Public Schools in Ohio has had marked success, know that teacher buy-in is the key and that directives from above are inhibitors to acceptance.

" "I have worked with teachers in both rural and suburban school districts, some who chose these new strategies and others who had them imposed. The most success is where administrators support the teachers who want to participate. Sometimes there is screening and even extra compensation, but those who participate over time have the most success," " she says.

Dixon admits some people do not see arts integration as viable, but she gives an example of how putting cameras in students' hands is a way to tell a story and study the intricacies of camera technology and storytelling as an art. " "Technology is not the end game it is the powerful tool to tell the story," " she explains.

Dixon's observation is not lost on corporate America, and certainly not on Robert A. Iger, chairman and chief executive officer of Walt Disney Co. In a recent article for the Wall Street Journal, Iger summed up the pairing of technology and art.

" "Technology is lifting the limits of creativity and transforming the possibilities for entertainment and leisure. Today's digital era has unleashed unprecedented innovation. In the years ahead, this fusion of technology and creativity will allow us to deliver experiences once unimaginable." "