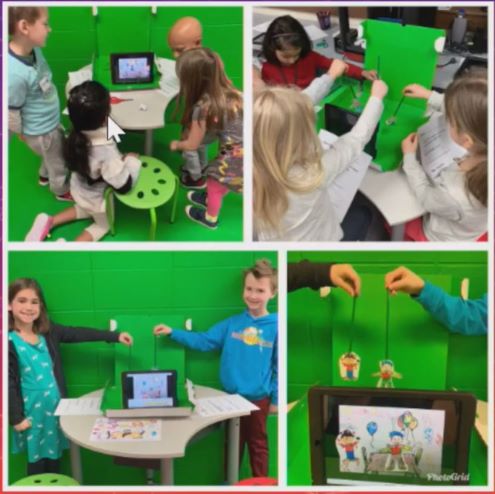 The pizza boxes, their interiors painted green, act as mini-green-screens, which provide the stages for the stories. The characters are cut from paper and attached to green straws. Students move characters around like puppets and provide the voices as the stories unfold against backgrounds provided by green-screen apps. An iPad set up at the front of the pizza box records it all.

It’s become a popular activity at Blake’s school. When students see the pizza boxes set up, they get excited.

“They know when they come in (they’re) like, ‘Oh man, this is going to be our day,’ because it’s a hundred percent theirs,” said Blake, a K-2 instructional technology integration coach in Clarendon Hills, Illinois. “I am not involved at all.

“I tell them to pick a director, pick a videographer, pick the actors who are going to use their acting voice, who’s going to be in charge, and they all have their own roles. I just sort of monitor and make sure that everyone’s doing OK.”

Putting the students in charge isn’t as chaotic as it might seem.

“Especially with my green wall, as cool as that is, when I want to film 25 6-year-olds, they have to wait for that,” she said. “And that drives them crazy. And me too, because then they go crazy and then they’re loud and then it kind of ruins the story for the other kids.

“So, with this, they don’t have to wait, number one. And number two, they’re not nervous because, yes, it’s their voice, but it’s the character they drew and taped to the straw and they’re not in front of the screens. Because sometimes, as you know, they shut down when they’re in front of that screen.”

All in all, it’s a low-budget activity that engages students and ignites their creativity.

An accessory or two, however, can up the production values.

“Another tip I’ll add, if you’re new to this and you have little people, there are green gloves you can buy from Amazon that look very creepy,” she said. “But when you buy them, they’re very good for the kids who are learning how to do this because their fingers inevitably are in every movie. But if you get the green gloves, they kind of get to learn a little bit more and their fingers aren’t in it.”

Watch the video below to learn more about using low-budget green screen technology in the classroom.

Want to learn how to inspire creativity in your students? Sign up for ISTE's Creative Constructor Lab Virtual, Oct. 3-10, 2020, to discover endless strategies for tapping into student creativity online or off.