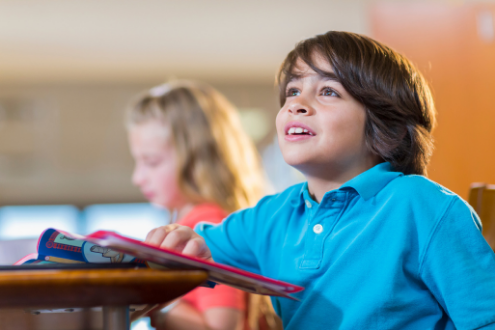 The Innovator Solutions section includes contributions from corporate sponsors and advertisers representing education organizations, businesses and other influencers dedicated to transforming education. This blog post was provided by MantelMount.

Ask any classroom teacher how important storage space is and they’ll tell you they can never get enough.

That’s certainly the case in California’s Los Gatos Union School District. Composed of five schools — four elementary and one middle school — every classroom has a whiteboard mounted on the wall. These boards, which are integral classroom tools, slide back to reveal a large storage space that holds an assortment of classroom supplies. Losing this space would create a storage nightmare.

Yet when Tim Landeck, the district’s director of technology, assessment and accountability, decided to put TVs in all the classrooms, he realized that to be at the optimum viewing height, they would have to be in front of the whiteboards, which would not only make the whiteboards inaccessible but also the storage area behind them.

The dilemma became clear: How could Landeck get the TVs at the perfect height (i.e., eye level) without sacrificing the existing whiteboards or the storage space behind them?

The answer was to install the TVs high on a wall using mounts from MantelMount. The design of the mount allows teachers to easily bring the TV down to eye level and then return it back to its original spot when it’s no longer needed, thereby allowing easy access to storage behind the whiteboards.

With about three feet between the tops of the whiteboards and the ceiling, there was plenty of room to install the mounts, which helped expedite the process. The install was actually part of a larger renovation that included all kinds of AV equipment, such as voice amplification speakers, webcams, wireless microphones and other devices to create hybrid workstations for teachers.

Landeck noted that it was important to get the TVs installed as quickly as possible given the critical need for a hybrid learning setup in 2020. Soon after the TVs and mounts were in place, the school district moved to a combination of remote and in-person learning – some kids were in, some were out – and the mounted TVs served both groups.

The TVs are essentially used as digital whiteboards to display words or images created by the teacher and projected to the TV from a document camera. They are also used to display online material from various websites. Whatever is on teacher’s computer screen is up on the TV screen.

For the students attending in person, the TVs are at a perfect viewing height. Eye level is desirable not only because it is optimal for resolution and image quality, but it also eliminates the need for both students and teachers to crane their necks to see the image, which can cause neck and back pain as well as other health issues.

For students attending via Zoom, focusing in on the TVs was much easier with the TV at a lower level, providing them with a cleaner, straight-on view.

“Our classrooms have been open since January 2021, and the installation of the TVs, along with the MantelMount units, is one of the reasons we were able to support hybrid instruction to students both in the classroom and at home at the same time,” Landeck said. Now with schools completely back to in-person learning, the mounted TVs are critical. Teachers need to be able to quickly pull down the display when needed and move it back up to access the whiteboard.

While all of the MM700 units offer identical movement — 26-inch or vertical travel with a 60-degree swivel — it is not necessary to use the full vertical drop or swivel capabilities. Teachers can adjust them based on their individual preferences or seating position of the students.

Landeck was no stranger to the MantelMount line. In December 2019, a trial run of about 15 units were installed in the kindergarten and first grade classrooms. They performed well and Landeck decided to use them again when the new installation came up.

They can be adjusted to the ideal view height

“These mounts accomplish so many objectives for both the teachers and the kids,” said Michael Smith, MantelMount vice president. “They bring the TVs to the best viewing height for the kids. They save the limited storage space. And because of their fluid dynamics, they’re extremely easy for teachers to pull down and push back up.”

And, says Smith, “Don’t forget about protecting the expensive electronics. When they’re not being used, the TVs will be out of harm’s way, high up on the wall,” he said. “Teachers won’t need to worry about kids hitting or damaging any of the equipment.”

Of course, a real barometer of the mounts’ effectiveness is the input from the users themselves – the teachers. According to Landeck, the feedback has been overwhelmingly positive.

“Our teachers love the MantelMount units and what it allows them to accomplish in the classroom,” he said. “Not only do they like that the mount can travel vertically, but they also find the swivel capability useful as well. And of course, they are very happy that they still have their storage space behind the whiteboards, as well as the whiteboards still being available for use.

“They’re also very pleased with how they look aesthetically,” he added. “It was a very clean install; the cabling and routing were meticulously handled. Our schools are nicely designed and very attractive. If the install weren’t done just right, I would definitely hear about it.”

The Innovator Solutions section includes contributions from corporate sponsors and advertisers representing education organizations, businesses and other influencers dedicated to transforming education. This blog post was provided by MantelMount. …

The Innovator Solutions section includes contributions from corporate sponsors and advertisers representing education organizations, businesses, policy-making bodies and other influencers dedicated to transforming education. This blog post was provided by     …

The Innovator Solutions section includes contributions from corporate sponsors and advertisers representing education organizations, businesses, policy-making bodies and other influencers dedicated to transforming education. This blog post was provided by      …