Design class allows students to choose their own learning adventure 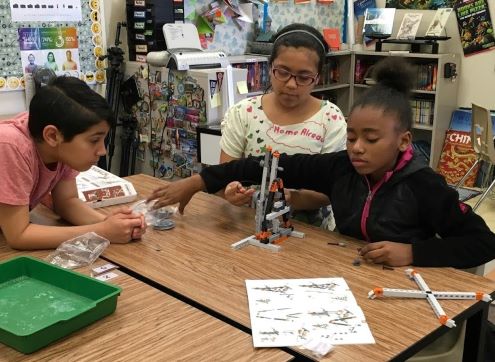 In the beginning, middle schoolers in Gina Baragone’s design class sought a lot of hand holding.

But after a semester of making their own choices, directing their own learning projects and adapting the classroom environment to meet their needs, it was a whole different story.

Take, for example, when the 3D printer jammed. By the time Baragone heard about it, a student had already Googled the problem, found an instructional video and figured out how to clear the jam himself.

“They’ve gotten so comfortable with not necessarily being successful the first time, with failing and trying again, that they have far less they’re coming to me with and worrying about. They’re not afraid to try things and see how it works out,” she says.

The design course at Cesar E. Chavez Middle School in California is a STEM elective that aims to expose students to several technologies, from robotics to 3D printing to digital photography, while teaching design thinking and project management skills. Launched last year with just one class, it quickly became so popular the school added five more classes this year and is looking at expanding it further next year.

“The kids really enjoy it,” Baragone says. “I’ve had parents tell me at back-to-school night that this is why their kid comes to school.”

While the class incorporates several of the ISTE Standards for Students, it shines as an example of empowered learning — particularly when it comes to encouraging students to customize their learning environments and make choices about what and how they learn.

The power of choice

With several different technologies to explore and only a semester to do it in, not everyone in Baragone’s classroom gets to try their hand at everything. Instead, kids choose their own learning adventures.

Each month, they select from a menu of activities and complete a list of independent tasks designed to familiarize them with the technology they’ve chosen. The options range from creative and artsy to more left-brained tasks—and many combine both. A student working with robotics, for example, might code their robot to dance to music and perform in a robot fashion show.

“The biggest skill they’re learning is self-management,” Baragone says. “I give them list and tell them work their way through it.”
As students work independently, with Baragone on hand as a facilitator, it’s up to them to determine what they need to accomplish each task. When they encounter a problem, she encourages them to try figuring it out on their own before asking for help.

“A lot of the technology will be way outdated by the time they enter the workforce, but they’re learning how to problem solve and manage their own workload,” she says.

By the time the final project rolls around, students have gotten to know the technologies well enough to put their own ideas into action. They’re then asked to think outside the box and design their own projects. They might engineer a 3D printed roller coaster and make a stop-motion animated movie about it or design a robot and code it to perform a certain task.

They also get to decide whether to work alone or in groups.
“There are lots of projects they can do alone, but a lot are more successful when they work with teams,” Baragone says. “They can talk with kids who are doing the same thing and say, ‘Hey, let’s work together’ or ‘I’ve got my own idea.’ They’re free to move around and interact with whoever they work well with.”

As students roam the classroom and exchange ideas, they’re practicing building their own collaborative networks—another key indicator of an empowered learner. Instead of working within a teacher-assigned team, it’s up to them to seek out peers who can help them accomplish their goals.

Although it’s only a semester long, the design class is intended to give students a taste of what it’s like to be a creative or STEM professional in the real world. By customizing their learning experience, they can start developing the skills they’ll need to drive their own design projects in the future.

“Today we have all this amazing technology, but a lot of times we get stuck doing the same thing with everybody all the time,” Baragone says. “The great thing about technology is that it makes it so easy to customize now, it’s easier to give kids what they need for where they’re at. I have three of these classes, with 36 kids each, and it gives kids the opportunity to really focus on what they’re interested in.”