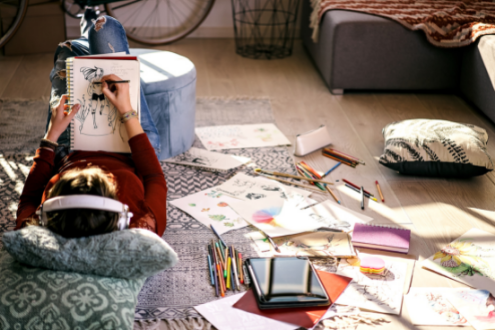 Michael Cohen was admiring a painting at friend's house one day when he was gobsmacked by a revelation about creativity. The way he tells it, he saw what he thought was an original painting hanging on the wall. He commented that the piece must have been expensive, being hand-painted and all. Not so, said the friend. The painting was a reproduction created by a member of a group of artists in China who were trained to emulate original masterpieces.

There are thousands of these artists and they paint what they are told to paint, never expressing their own ideas or imaginations, Cohen learned.

And that’s when it hit him. Here was proof of a painter who isn’t creative in the traditional sense of the word.

It was a revelation that got Cohen, an educator and designer who helps teachers uncover their creative abilities so they can empower students, thinking about the fundamental nature of creativity. A robot and a person can be trained to paint what they're told, but a truly creative person is able to create from what they themselves see.

And yet in classrooms every day, students tell teachers, I’m not creative; I can’t draw.

Proof point No. 2 in redefining creativity: Elon Musk, CEO of Tesla and SpaceX.

“He doesn’t need to be an artist to be seen as a creative person. It’s in the way he thinks and approaches the world. It’s a creativity mindset,” explains Cohen. “The creative mind can conjure up solutions to problems. How you see the world around you, how you interact with others and how badly you want to impact others, that’s the essence of creativity.”

Cohen instills creativity to his teaching at Yeshiva University of Los Angeles Boys School (YULA). In what he’s dubbed the entrepreneur studio, Cohen helps students develop self-awareness, learn how to ask questions and have conversations with experts and designers like himself who are connected outside the world of education.

“When I look at technology, there are so many ways for students to create and develop problem-solving muscles with video, audio and multimedia content. Students don’t have to draw, but they do have to have a vision and look at the world in an imaginative way or in a way that they can see when something is deficient. Thomas Edison wasn’t creating a light bulb, he was creating a way for people to see in the dark.”

In much the same way, industries that thrive – he points to Airbnb and Lyft as examples – success came from embracing the unknown and being open to experimentation.

Cohen says students who have been trained to prepare for the test, and then the test after that and then the big test are struggling to figure out what they’re passionate about, good at and interested in. And they’re scared to admit they don’t know. Or that they’ve failed.

But in Cohen’s classroom, they’re starting to develop a sense of awareness that will allow them to develop that critical creative mindset.

“Students need a dedicated space to develop these skills and tie their academic skills to a space where they can connect and use them for something they’re passionate about,” Cohen says.

In Cohen’s studio, students start by filling out a personal growth plan that includes a self-assessment of one’s skills, values, strengths, interests, wants and areas to improve upon. And they reach out to others to get some perspective.

From there, students develop an action plan that will guide them in creating something. “They go on a quest to learn some sort of skill or create something. And I tell them, ‘You go for it and I’ll support you.’”

Students need to be design thinkers

Students have to figure out what skills they need to design and build their creations and how to get those skills. They have to observe and do research and break things down. They have to do the steps to create. And they have to be open to failure. Because it happens.

Take the student who wanted to create an app but failed to properly research whether it already existed. It did.

Or the student who said he wanted to be an interior designer, but after doing the research, found out he had it wrong. His dream job was closer to that of an interior architect.

“Creativity is an abstract thing and teachers don’t like that space. But those random conversations are learning opportunities,” Cohen says.

And he believes this kind of learning should happen over multiple years and with exposure to multi-step creative processes, not just doing little projects or creating a video.

It’s about achieving learning goals by meeting students at their levels and using their mediums. That’s what prepares them to embark on a learning journey.

“Time has to be dedicated to developing creativity. It’s going to be messy and they will fail and many won’t produce a product that is of any quality – but the journey will be of quality.”

This is an updated version of a post that originally posted on March 20, 2018.