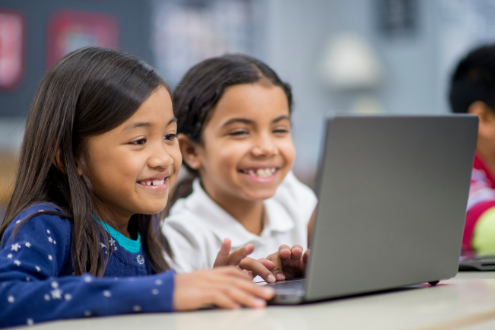 Years later and thousands of miles away, a group of sixth graders in St. Louis, Missouri, listened to her recollections as they worked to reconstruct her childhood world in a virtual reality museum.

At Hancock Place Middle School, where 100 percent of students receive free and reduced lunch, few kids ever venture outside their community, says social studies teacher Matt Bright. Most will grow up, work and raise their families in the same place they were born. Yet many are also second-generation immigrants whose families fled the Bosnian war.

“A lot these kids didn’t know, ‘Why am I here? How did I get here?’ ” Bright says. “They’re not aware of the world outside their zip code.”

To help broaden their worldview, Bright partnered with an English teacher at his school to create the Gateway Memories Project, a cross-curricular community engagement project designed to encourage students to explore their own immigration stories — or those of others — through virtual reality.

“It was just kind of a way to show them what else is out there in the world, and even in their own neighborhood,” Bright says.

STUDENTS DIRECT THEIR OWN LEARNING.

As the sixth graders worked on their VR tours, Bright took a hands-off approach, letting their excitement for the project guide their learning. Students determined which skills they needed to develop, such as coding or animation, to bring their vision to life. Bright let them fail when necessary, stepping in only to help them figure out what went wrong. His advice to other teachers: “Don’t be afraid. Just take a chance, let it go where it goes, and trust that your kids will do the right thing.”

THEY PUSH THROUGH THEIR STRUGGLES.

Because students were so absorbed in the project, they “forgot” to complain about tasks such as writing, which is typically difficult for the sixth graders, most of whom read below their grade level. “The kids were writing more than I’ve seen them write all year,” Bright says. “They were pumped up. The project was theirs, and that passion led to enthusiasm, which led to higher-quality work.”

It’s powerful when students express their learning by creating something — but virtual reality takes it to the next level, Bright says. “It’s getting them immersed in a world, whether fiction or nonfiction, and getting them to bring something to life. They love to create their own world and show each other what they’re doing.”
In the process, he adds, they also learned important lessons about “seeing people as people. That we all have a story, and everybody’s story is as important as everyone else’s.”

Years later and thousands of miles away, a group of sixth graders in St. Louis, Missouri, listened to…

The client: A second grade classroom learning about nutrition.

The product: A chatbot capable of dispensing information about local produce.

Today’s students will live and…