How Educators Can Use Discord to Connect With Students 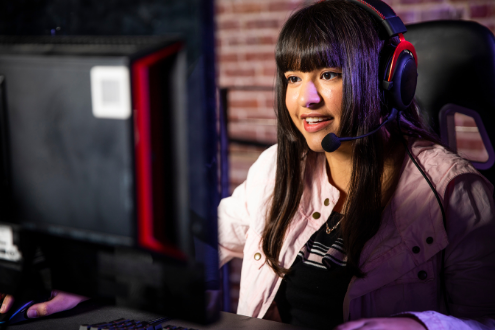 You could say that the pandemic was huge year for Discord.

The chat platform used by gamers has expanded way beyond its base. Last year it hit 140 million monthly users, twice as many as those who used it in 2019. With schools remote, people inside, and video game and streaming hugely popular, Discord has become a new place for community.

It’s also a space for collaboration and education. Many of your students are active on Discord — so now is a good time to connect and communicate with them there.

Cassie Leclair-Marzolf is a teen services librarian with Salt Lake County Library. When the COVID-19 lockdown hit her area last April she started a Discord server.

“We were all scrambling at the time to find ways to bring programs and services to our library users through whatever virtual tools we were able to use. I had seen several posts on social media about other libraries using Discord so I pushed it as a platform we could use for virtual programs, especially for teens who were likely already using it and would probably be less interested in another Zoom activity.”

In the Salt Lake County Library’s Discord channel, they play Dungeons & Dragons, run book clubs and a teen anime club. From the teens in anime club, the library staff discovered that much of the appeal of Discord was that kids just wanted a place to hang out and chat about geeky things.

So the library started a teen lounge in September 2020. “The intention of the program was to be a virtual space for teens to connect, chat, hang out, mess around and geek out,” said Leclair-Marzolf. “We wanted it to be a space that was less about having to do something or get something done, and more a place where they could be social together and just be teens.” On the server young people in the teen lounge share memes and art they’ve made, play games and support one another.

Adolescents have been hit hard during the COVID-19 pandemic and all educators are looking for ways to meet their social-emotional needs. While more research is needed, many young people have had increased anxiety and depression and more mental health emergencies.

Having the social space through Discord has benefitted the teens.

“Every so often one of the teens will say something about how they’re feeling lonely and miss seeing/having friends,” said Leclair-Marzolf. “They are really looking for ways to connect to their peers, and this is one way we can help with that.”

The server became a safe space for the teen participants where they felt they could be vulnerable. “We’ve also had some really tough conversations with them — one teen came out as trans to their friends and family over the course of several weeks and used the server as a place to express their anxieties about it. Their peers on the server were very supportive, and I think it was also helpful to have the librarian moderators chime in as supportive adults.”

What should an educator do if they want to set up their own Discord server?

Determine your goals for the server.

Cassie Leclair-Marzolf advises educators to “play around with it as much as possible before opening it up to teens/public.” While exploring the platform, educators should think about their goals. Is this a place simply for hanging out? Or for sharing and/or working on projects? Or is it a place for instruction? Discord allows for multiple servers which gives educators the opportunity to have each one with a specific focus and rules.

Like all digital tools that allow communication, make sure you're reinforcing good digital citizenship skills. If the server is an extension of a classroom, the same policies and behavioral rules should apply. Those rules should be clear and posted. But if students falter, use the mistake as an opportunity to talk about digital citizenship. Leclair-Marzolf shared some of the library’s teen lounge rules: 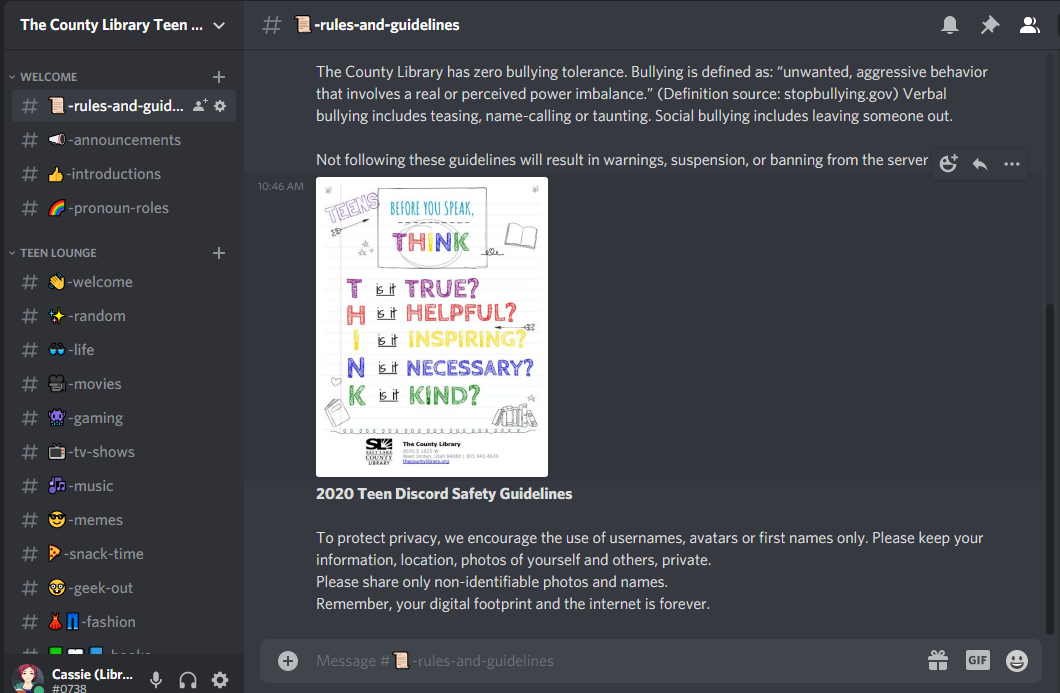 Along with the rules, a clear consequence was outlined: “Not following these guidelines will result in warnings, suspension, or banning from the server.” Leclair-Marzolf has said they haven’t had a problem with their server but they’re prepared. On their server is a “Welcome” channel which outlines these guidelines.

Discord offers different tools for moderation that can filter out swear words and/or slurs, inappropriate images and spamming. Leclair-Marzolf recommends Zira that “lets you self-select roles on the server.” Another bot she mentions is Dyno, that gives the administrator the ability to mute someone’s typing. An educator can also set up an admin-only channel that’s hidden from students for a way to talk and collaborate with other adults. Discord servers can be text-only and block users from sharing images or external links.

Determine the availability of the server.

Like a Zoom meeting, educators can limit when a server is open. For certain instructions or discussions this may be preferred. Limiting the availability of a server also makes it easier to moderate the discussion.

“We do turn off the ability  to post or connect to voice channels when we don’t have a program actively running,” said Leclair-Marzolf. “We did this mostly because we decided we wanted to have library staff moderators, and we don’t have the staff to keep an eye on the server all the time. I think we would probably get a lot more use of the server if we left it open, but that was a decision we made.”

Discord is a flexible and adaptive platform. There are many ways to use it and countless servers to join. Educators have to decide what works best for them if they choose to use this popular communication tool. As for Cassie, the library plans to continue using their Discord server, “but probably not for Teen Lounge. I think when we’re able to do in person programming again, we won’t need the hang-out space as much anymore.”

Online communication tools like Discord have been a support and even a lifeline to many young people during the pandemic. Having those hang-out support spaces are necessary. As schools, libraries and shops reopen, there will be more hangout spaces. But there will also be many more Discord users. Discord is not going away anytime soon and it’s another tool for educators to connect, collaborate and communicate with their students.

Carrie Rogers-Whitehead is the founder of Digital Respons-Ability and the author of Digital Citizenship: Teaching Strategies and Practice from the Field and the upcoming title from publisher Taylor & Francis, Becoming a Digital Parent. She'll be presenting at ISTELive20 on how to host a digital parenting event.