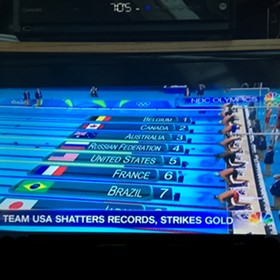 Every two years the Olympic Games offer a spectacle of skill, endurance and perseverance. They regale us with human interest stories and inspiration. They also serve as showcases for technologies that measure, display and entertain.

Many of these technologies find their way into classrooms and provide tools for young students. Animated graphics, green screen technology, and colorful and informative data presentations are three of the technologies that have become affordable and easy to use. Students can use them to enhance their productions in ways that could only be imagined just a few years ago.

The opening ceremonies in Rio demonstrated pageantry and storytelling with rear screen projection, sophisticated lighting and special effects. But it’s the competitions themselves that employ technology in ways that can inspire creativity and motivate students to learn new production techniques. As educators, our challenge is to explore how we can incorporate these exciting technologies in ways that can further learning.

Here are just a couple of the technologies augmenting Olympic coverage:

The official photography agency for the Rio Olympic is Getty, and every Getty photographer will be outfitted with a 360-degree camera. Oculus VR, now owned by Facebook, will share over 100 360-degree images on the Oculus 360 app on Gear VR, as well as its Oculus Rift headset and the affordable Google Cardboard. You can also view 360-degree videos on YouTube, but without the advantage of the 3D effect the goggles provide.

In the classroom: For less than $350 you can purchase a Ricoh Theta 360 camera the size of a candy bar that can record 360-degree live video or still images. Students can create their own VR productions, school event documentaries and virtual field trips. Other 360-degree cameras include Kodak’s PIXPRO SP360 Action Cam and the Luna 360, a small, lightweight alternative.

The swimming competitions are a great example of using augmented reality to add layers of information. At the beginning of the races, the flags of the athletes’ countries, athletes’ names and lane numbers appear to be under the water. You’ll sometimes see a yellow world record line move along so that you can tell if a swimmer is progressing at a record pace. As the race continues, and ends, you’ll see the first-, second- and third-place numbers, country flags of the leaders and “WR” next to competitors who set a world record.

In the classroom: With the introduction of Pokemon Go, many people now understand the engaging quality of augmented reality, where animated and still images appear to be superimposed on your surroundings. There are many ways to experience and create AR. Aurasma allows you to create your own “auras.” A trigger image of your choosing, viewed on a mobile device, can begin a video. Imagine the possibilities, such as placing AR trigger images on books in a classroom library that lead to recorded student book reviews.

In addition to VR and AR possibilities, there are many ways that the Olympics can prompt classroom activities. The following websites have resources, lesson plans and ideas for classroom projects relating to the Olympics.

Want to learn more about some of the hottest ed tech tools on the horizon? Read the EdTekHub.