Will educators get virtual reality right? 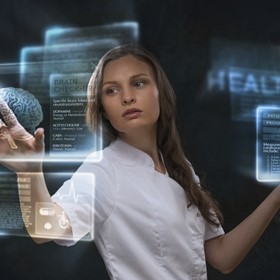 Guttenberg did not merely press blocky lead letters onto paper; he democratized the distribution of knowledge. The Wright brothers built a flying machine, but it was pioneering pilots like Amelia Earhart who turned that machine into a dream catcher. In the 1960s, NASA rocketeers built a totem to the audacity of the American ethos. Bill Gates did not just write a new computer operating system; he imagined a world where computers might be accessible to every family in every home. And the disruption of Steve Jobs was that he saw a world in which computing was an extension of human expression. Real disruption, like great learning, is about changing mindsets, not just mechanics.

Technology has failed to usher in foundational changes in learning

Twenty years ago a number of very bright people, including the godfather of disruptive innovation, Clayton Christensen, forecast that personal computers would radically change traditional classroom education. At each step of increasing mobility and user-centric functionality in personal computing — laptops, handhelds, tablets, phones — smart educators, technologists and futurists predicted a quantum shift in the patterns of student learning and how schools actually function. They were wrong. While the mechanics of some learning in some schools has changed in the last two decades, the magnitude of change has fallen far short of those lofty predictions of foundational disruption. The foundational operations of most schools today are remarkably similar to schools 60 years ago.

A decade ago, more very bright people — cash-rich venture capitalists, forward-leaning for-profit and not-for-profit organizations, and colleges and universities — began investing hundreds of millions of dollars and vast amounts of time and talent to create massively open online courses with the surety that big box schools were on the verge of obsolescence. Today, many of those MOOCs have run aground or sunk completely, with more disappointing results than demonstrable successes in terms of actual student learning outcomes.

We know that learning is both relational and transactional, and of these, the greater is the first. While I think most educators will agree with the foregoing, try it for yourself; it only takes a few minutes. Gather a group of school stakeholders — students, teachers, administrators, parents, community members — and ask them to recall and share a time in their lives that they learned something so powerful that they can still recall it today. Ask them for a word or short phrase that describes the conditions that allowed that peak learning to take place. I have done this with thousands of such stakeholders over the last three years, and the big words in the word cloud are terms like: supportive, risk taking, mentored, experience, passion, interest, community, curiosity, connection, confidence, empowerment. These words describe the relationship between the learner and the teacher, peer, environment or subject. Words that relate to the mechanics of learning are nearly invisible.

Deep, rich relationships among learners, teachers, subject and experience lead to more effective learning transactions, but the reverse is not true. Unfortunately, digital age technologies that have reached the classroom have been largely transactional. A few technologies have greatly amplified relational learning and these have generated powerful benefits to education. Access to the internet and shared-access platforms like Google Docs allow learners to relate to each other and to the world outside of the classroom in profoundly expansive ways. But many uses of technology in education largely amplify the transactional transfer of knowledge and do little to leverage the relationships of the learner, adult or child, to peers, teachers or the relevancy of what and why they are learning.

Virtual reality has the power to transform education landscape

All of this is about to change, and this time we, the educators, need to get it right. Virtual reality (VR) provides an opportunity for learning that is exponentially greater than any previous digital technology. VR creates conditions for highly relational learning while simultaneously breaching the rigid, artificial and, in some cases, prison-like boundaries of time and space that continue to stunt the potential of learning in traditional schools.

As I explained in detail in an article that helped kick off the Transforming Teaching initiative of the Harvard Graduate School of Education in the fall of 2015, education writ large has spent enormous treasure and talent over the last 50 years re-tooling the hardware and software of schools, but we have failed to fundamentally rebuild an operating system that has persisted largely unchallenged and unchanged for 150 years. The rapid, inevitable rise and adoption of VR technology is one more irresistible force that demands we rewrite the operating system of PK-12 education, or run the risk of “school” becoming irrelevant.

Technology development has moved at light speed in the last 20 years as companies compete to out-innovate each other, which is great! Unfortunately, this leapfrogging is utterly out of phase with the glacial pace of change in most schools. The lag time between the emergence of new technology and its effective use in schools results in generations of students who do not benefit in their learning as much as the rest of the world benefits from increases in productivity and creativity. The bottom line is that it is easy to buy new equipment and new software. It is messier and more difficult to transform pedagogy to use those technologies in ways that create better learning outcomes.

At a very high level, the explosive pace of VR development falls into two broad categories. Most of the money and attention is pushing development of new headset-based hardware that allows users to experience and operate in a true 360-degree 3D virtual world, and content to fill those worlds. Forrester Research estimates that 52 million units of VR head-mounted displays will be in enterprise and consumer use in the U.S. by 2020. Every week or month we see a new mind-blowing advance that will soon be in the rearview mirror of the developers, while educators and students are still learning how to effectively use laptops and tablets in the classroom.

The second category of VR, which is not getting that kind of attention, is what will actually transform learning, and, in fact, the entire nature of human connectivity. Beginning with the internet, and through the rise of social media, humans are suddenly able to connect in ways we never could throughout the long span of human history.

In 2012, I coined the term the cognitosphere, what others have termed the metaverse, to describe the just-now-evolving global socio-neural network of knowledge acquisition, sharing, management and archive that is rapidly becoming accessible to anyone on the planet with an internet-connected device.

VR is the next evolutionary stage of development of the cognitosphere, and will allow learners to participate in an intricate web of knowledge nodes and flow, that for the first time can be highly relational. Where schools of the future create effective portals into the cognitosphere, they will be relevant and powerful; where they fail in this, they will be vastly less so.

The enormous promise of VR for learning is that it captures both the transactional and relational engines of great learning by allowing learners to meet, share and create, unbounded by time, space and the experience of the people in a single classroom. It allows learners to replicate the rich relationships that happen in the best classrooms, but are not possible on a podcast, in a video chat or even in online video-based collaborations.

VR and virtual holography are already providing the tools for people in different locations to not only meet and share knowledge and experiences, but also to collaboratively and richly build a virtual machine, dissect a virtual cadaver, study at a virtual field station, or critique a virtual painting.

The enormous problem we face is that education is already a generation of technology behind in the use of VR. While the focus of development is largely on full 360-degree headset-based technology, desktop-based, 3D Second Life-type VR collaboration environments are available right now, using common desktop, laptop and mobile hardware. For the last two years I, with a small group of colleagues, have been exploring how these existing platforms might turbo-boost education into the evolving metaverse, and the opportunities are staggering.

There are only two obstacles we need to overcome: access and pedagogy. Right now most teachers and schools can’t afford the license fees that are just not in teachers’ and schools’ budgets. And we, the educators, have no shared understanding of how to effectively learn or teach in a virtual environment; there is no “guidebook to VR pedagogy.”

Educators risk reliving the same mistakes we have made in the past 20 years, of losing what is powerful in the bright lights of exciting new technology. Educators need to get skin in this game — now — not five years from now when we are even further behind on the development and learning trajectory.

So, what do we do?  In my upcoming book, Moving the Rock, I issue some audacious challenges for how we can fundamentally improve education at scale. The challenge related to the VR revolution demands a profoundly greater intersection between professional educators and technology developers. There is plenty that needs to be done on the developer’s side to make this technology truly accessible to teachers and students; we need a lot more voices calling for such access.

As educators, we can start right now to write the guidebook to VR pedagogy, an open resource of how to use VR in a range of settings, not just as a virtual gaming or tourism tool, but as a remarkable portal of interest-based, collaborative, silo-busting learning.

Grant Lichtman is an internationally recognized thought leader in the drive to transform K-12 education. Based on two decades of work as a senior administrator, teacher and trustee in K-12 education, he speaks, writes and works with school and community teams to build capacity and comfort with innovation in response to a rapidly changing world. He shares his resources at www.grantlichtman.com, and is the author of two books, #EdJourney: A Roadmap to the Future of Education and The Falconer: What We Wish We Had Learned in School. Grant received his bachelor's and master's degrees in geology from Stanford University.

Read about how educators are using virtual reality in the classroom on the EdTekHub.